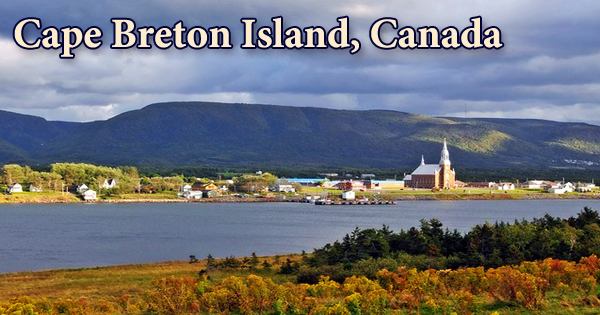 The stunning natural beauty and safe, friendly villages of Cape Breton Island (French: Île du Cap-Breton, formerly Île-Royale; Scottish Gaelic: Ceap Breatainn or Eilean Cheap Breatainn; Mi’kmaq: Unamaꞌki) are world-renowned. It is a North American island off the coast of North America that is part of the Canadian province of Nova Scotia. The Strait of Canso (southwest) separates it from the rest of the province and the Canadian mainland, and it is also bordered by the Gulf of St. Lawrence and Cabot Strait (north), the Atlantic Ocean (east and south), and Northumberland Strait (west).

The island covers 10,311 km2 (3,981 sq mi), or 18.7% of Nova Scotia’s total land area. The island is geographically isolated from the Nova Scotia peninsula by the Strait of Canso, but it is connected to mainland Nova Scotia by the 1,385 m (4,544 ft) long rock-fill Canso Causeway. Its landmass rises from south to north, culminating in the vast highlands of its northern tip, which are the highest point in the Atlantic basin. The island’s core is formed by a saltwater lake (the Bras d’or), which has afforded the island’s only significant access to its interior for settlement purposes.

The island stretches for 110 miles (175 kilometers) and is up to 75 miles (120 kilometers) wide at its widest point. Cape Breton, Inverness, Richmond, and Victoria counties make up the administrative division. The island is located east-northeast of the mainland, with its northern and western beaches facing the Gulf of Saint Lawrence, as well as the eastern borders of the Northumberland Strait. The Atlantic Ocean is on the eastern and southern coasts, and the Cabot Strait is on the western side of the island. Its landmass rises upward from south to north, reaching its apex in the northern cape’s highlands.

The region’s live culture, which includes Celtic, Acadian, and Indigenous history and traditions, attracts visitors. International festivals, museums, national historic sites, and significant cultural events enhance the richness of life on the Island. The island’s center is dominated by Bras d’Or (“Arm of Gold” in French), one of the world’s largest saltwater lakes. Warm summers, gorgeous autumns, crisp winters, and a delightful spring are all examples of Cape Breton’s beauty.

The Cape Breton Regional Municipality (CBRM), which includes all of Cape Breton County and is often referred to as Industrial Cape Breton due to the area’s history of coal mining and steel manufacturing, which was Nova Scotia’s industrial heartland throughout the twentieth century, is home to approximately 75% of the island’s population. It is divided officially into four counties: Cape Breton, Inverness, Richmond, and Victoria, and is separated from mainland Nova Scotia by the small Strait of Canso (which was bridged by a 2 km causeway in 1955) and adjacent Newfoundland by the 110-kilometer-long Cabot Strait. It gets its name from the Basque Cap Breton, which is located near Bayonne, France.

The weather and temperature fluctuate throughout the day on Cape Breton Island, which has a temperate coastal environment that rarely gets too cold or too hot. The early inhabitants of Cape Breton Island were most likely archaic marine natives, ancestors of the Mi’kmaq. These peoples and their descendants have lived on the island (known as Unama’ki) for thousands of years and continue to do so today. Cape Breton has a wide cultural heritage, with over 30 cultures represented, including Acadian, Scottish, Mi’kmaw, African, Irish, and others.

The island is home to a vast network of national historic monuments, museums, and experiential-based tourism assets, as well as Membertou, one of Canada’s most economically successful First Nations towns, and Eskasoni, the world’s largest Mi’kmaq community. Get an insight into the mind of a genius by visiting the Alexander Graham Bell National Historic Site in Baddeck. At the Cape Breton Miners’ Museum, descend into an underground coal mine with a retired miner. The Cape Breton Highlands, sometimes known as the “Highlands,” are an extension of the Appalachian mountain group that dominates the northern part of Cape Breton Island.

All cash transactions on Cape Breton Island will be in Canadian dollars (CAD). The Canadian dollar’s exchange rate to the US dollar is usually around 70 cents. The Canso Causeway connects Cape Breton Island to the mainland and was completed in 1955, allowing direct road and rail access to and from the island while still allowing marine traffic to pass through the Canso Canal at the causeway’s eastern end. More recently, a significant oil-refining and pulp-and-paper-making sector has grown in the southeast corner of the island, taking advantage of the enormous harbor formed by the construction of the causeway to the mainland at Port Hawkesbury.

Eskasoni, Membertou, Wagmatcook, Waycobah, and Potlotek/Chapel Island are the Mikmaq Nation’s five reserves on the island. Eskasoni is the most populous and has the most land area. Cape Breton’s great Scottish history is reflected in vibrant performing arts and a dedication to preserving traditional crafts. There are also a number of major educational and cultural institutes. Cape Breton and its people continue to honor age-old traditions while going out of their way to welcome new migrants from across the province and around the world. They are known for their unique music, dialects, food, and visual arts.