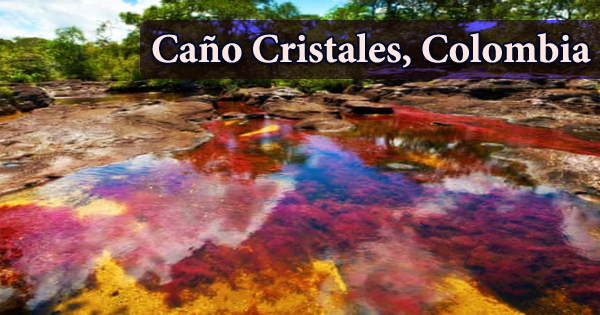 Caño Cristales (English: Crystal Channel), also known as the “River of Five Colors” or the “Liquid Rainbow,” is a Colombian river located in the Serrania de la Macarena province of Meta, and is a tributary of the Guayabero River. It is fondly known as such because people can see yellow, blue, green, red, and black tones through its crystalline waters. Cao Cristales is indistinguishable from any other river for most of the year, with a bed of rocks covered with drab green mosses exposed beneath a cold, clear stream.

The Macarenia clavigera, an indigenous aquatic plant that ‘paints’ Caño Cristales with magnificent hues when exposed to the sun’s rays, is responsible for this natural wonder. Some have proclaimed the river to be one of the most beautiful on the planet. According to National Geographic, the river appears to have originated in “The Garden of Eden” (In English this beautiful river translates to Crystal Channel). The river also has waterfalls, pools, and caverns that add to the drama.

Furthermore, because there are no fish or other critters in Caño Cristales, tourists may bathe without interruption. About 1.2 billion years ago, the quartzite rocks of the Serrania de la Macarena tableland formed. They are a western extension of Venezuela’s Guiana Shield. When tourists arrive in the region, they will first pass by the Mirador, a tiny mountain that rises over the Guayabero River and provides an outstanding panoramic view of the Caño Cristales riverside, where they may explore numerous sites.

The Tourist Pool is the most well-known, where tourists may bathe in a rainbow-colored flow. The river, however, blooms in a brilliant burst of hues for a limited period of time each year. When the water level is exactly perfect between the rainy and dry seasons, a unique type of plant called Macarenia clavigera that borders the riverbed becomes a vivid crimson. Splotches of yellow and green sand, blue sea, and a thousand hues in between provide contrast.

Caño Cristales is a rapid-flowing river with several waterfalls and rapids. Because of its vibrant colors, this “liquid rainbow,” as it is sometimes known, is one of the most outstanding natural wonders in the South American country. Many areas of the riverbed feature small circular holes known as giant’s kettles, which were created by pebbles or pieces of tougher rocks. When one of these tougher rock fragments falls into one of the cavities, it is twisted by the water circulation and begins to cut away at the hollow wall, expanding the pit’s size.

For the few months when the circumstances are ideal, the riverbed glows vivid red, yellow, green, blue, and black. The water runs too fast and deep during Colombia’s rainy season, concealing the river’s bottom and depriving the Macarenia clavigera the sunlight it requires to turn red. During the dry season, the river’s brilliant diversity of life is unable to sustain itself. The river, however, changes into a genuine living rainbow for a few weeks in September and November.

The Serranía de la Macarena lies on the boundary of three huge ecosystems, each with rich flora and fauna diversity: the Andes, the Eastern Llanos, and the Amazon rainforest. The colors are created during the reproductive phase of the aquatic plants in the river, Macarenia clavigera, a member of the Podostemaceae river weed family. During the rainy season, the river rushes fast and high, blocking the sun from reaching the plants in the riverbed. There isn’t enough water to support the plants throughout the dry season.

Because the seasons seldom change, tourists who wish to see the bloom must visit the national park during the months when it is most apparent. Plant and animal life have evolved a variety of adaptations to cope with the paucity of nutrients on the tableland’s solid rock surface. Between 1989 and 2009, the Caño Cristales was blocked to the public and largely destroyed by the Guerrilla, paramilitary, and army. Visitors and tour firms that have begun to appear in the region have gradually grown safer.

The hydrophytic rainforest, which can be hot, warm, or chilly, is the Serranía de La Macarena’s representative biome. Around 420 bird species, 10 amphibian species, 43 reptile species, and eight primates live on the tableland. The region, which is home to numerous unique species, is a biodiversity hotspot where the Andes mountains, Amazon, and Orinoco rivers intersect. The Caño Cristales River is home to a diverse array of aquatic vegetation.

Due to a lack of nutrients and tiny particles, the river’s water is crystal pure. In 2009, it was reopened to guests, and now, numerous Colombian tourist agencies provide flights to La Macarena. They must then go by horseback (or donkey back) and foot to the river location as part of a guided tour. Waterfalls authorized swimming places, rapids, fast-flowing water, and small circular pits or holes produced by stones or chunks of rock banging against each other may be found along the 62-mile (100-kilometer) section of the river.

Swimming is only allowed in specific locations, and swimmers must not use sunscreen to protect the sensitive ecology. The delicate ecosystem’s charm is that it varies every year. Each rainy season, the river returns somewhat differently from the year before, with new hues and riverbed movement. Check the weather forecast for great photos, because when it’s overcast, the sun’s rays don’t shine the river, and the colors aren’t as vibrant. If there hasn’t been any rain in a while, the water levels decrease, destroying the delicate plants and changing the hue from bright red to brownish.