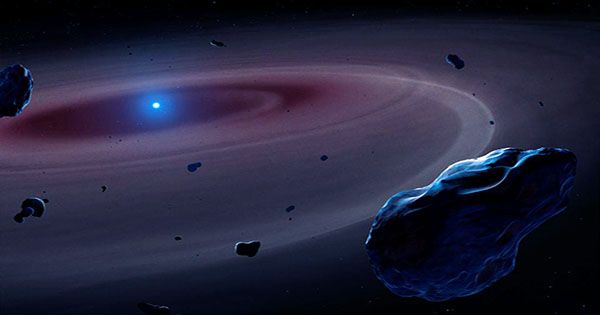 Astronomers Catch White Dwarf Switching On and Off For First Time

White dwarfs are stars that are not big enough to go supernova. These stars are no longer fusing atoms to release light, and they are becoming dimmer by the day. If they can steal any material, though, they can brighten up once more. Over the course of 30 minutes, astronomers have captured one such star brightening before dimming again. This amazing discovery follows prior discoveries of white dwarf stars stealing material and brightening over days or months — but for TW Pictoris, as described in Nature Astronomy, the accretion process takes only minutes.

TW Pictoris is around 1,400 light-years from Earth, and NASA’s Transiting Exoplanet Survey Satellite detected its strange behavior (TESS). It has a partner from which it siphons hydrogen and helium. The white dwarf is “on” when it is actively accreting, increasing brighter. Then the accretion comes to a halt, and the white dwarf accretion turned off.

In a statement, lead scientist Dr. Simone Scaringi of Durham University’s Center for Extragalactic Astronomy noted, “The brightness changes found in accreting white dwarfs are often quite gradual, happening on timescales of days to months.”

“To observe TW Pictoris’ brightness plunge in 30 minutes is remarkable in and of itself, as it has never been seen in other accreting white dwarfs and is completely unexpected given our understanding of how these systems are meant to feed through the accretion disk.” It looks like it’s turning on and off.” The strong magnetic field of such star objects, according to current knowledge, is critical for regulating accretion. The magnetism in the white dwarf can operate as a gate, preventing part of the material from falling into it for a while as it spins fast.

White dwarfs are not the only ones who go through the accretion process. Neutron stars and black holes also do it. However, because white dwarfs are larger and more numerous, investigating accretion in these objects could provide useful information, especially when it comes to findings like this. “Because we can draw comparisons with similar behavior in much smaller neutron stars, this could be an important step in helping us better understand the process of how other accreting objects feed on the material that surrounds them, as well as the important role of magnetic fields in this process,” Dr Scaringi continued.