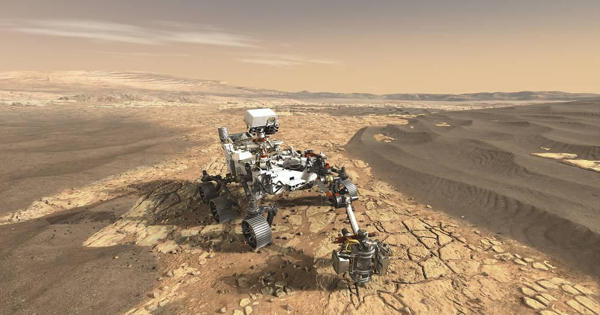 NASA’s Perseverance rover made a daring landing on the Martian surface, which millions have watched (and rewatched). But now comes the hard part. An instrument designed to inhale Mars’ carbon dioxide-rich atmosphere and exhale oxygen is tucked deep inside Percy. It’s essentially a mechanical tree, and it has the potential to reshape humanity’s future on Mars.

Mars’ atmosphere is about 1% the density of Earth’s. If we want to live and work on Mars, we’ll need to generate and store oxygen.

“What breathes the most on a Mars mission? Not the people,” Michael Hecht, Associate Director for Research Management at MIT’s Haystack Observatory and principal investigator for NASA’s MOXIE project, tells Popular Mechanics. “It is the rocket that will take you home from Mars, that will get you off the planet.”

NASA estimates that a four-person crew will require a large amount of propellant—approximately 15,000 pounds of fuel and approximately 55,000 pounds of oxygen—to generate the thrust required to leave the Martian surface and return home. It’s a pain to transport all of that oxygen from Earth.

That’s where the Mars Oxygen In-Situ Resource Utilization Experiment, or MOXIE, comes in.

MOXIE, which is about the size of a car battery, is one of NASA’s many in-situ resource utilization (ISRU) experiments, and it is the first to travel to space. ISRU is essentially the agency’s version of homesteading, and the experiments investigate ways for future spacefarers to produce goods from resources available on other worlds.

Jerry Sanders, who leads the ISRU Capability Leadership Team at NASA’s Johnson Space Center in Houston, tells Popular Mechanics, “If we really want to get off-planet and do something other than a science mission, you really need to start thinking about living off the land.”

NASA is devoting valuable time and resources—approximately $50 million in the case of MOXIE—to developing strategies for self-sustaining settlements on the moon and Mars. We’re about to find out if MOXIE—and other experiments like it—can really work after years of effort.

According to Asad Aboobaker, a MOXIE collaborator and instrument systems engineer at NASA’s Jet Propulsion Laboratory in Pasadena, “this electrolysis system is really the heart of MOXIE.”

When heated to high temperatures, the stack is made up of layers of metal and specialized ceramic cells that use oxygen ions to conduct electricity. “You can selectively drive the oxygen ions through that ceramic membrane and separate them out from everything else if you have an applied voltage,” Aboobaker says.

MOXIE is a refined system. Carbon dioxide is introduced. In this case, oxygen and carbon monoxide (a harmless byproduct) are released. Hecht believes that if the system receives too much electricity, it may produce carbon, or soot, as a byproduct instead of carbon monoxide. On the other hand, if the voltage is too low, too much carbon dioxide may enter the system and begin to oxidize the instrument.

“We need to stay right in the sweet spot between the two,” he explains.

“Moxie” can also be defined as a personality trait. Someone with moxie is considered brave and daring, as well as hardy and spirited! Nobody knows for sure, but the term could be derived from Native American place names for “dark water.” People drank “Moxie,” a tonic that later became a soft drink, in the late 1800s. Because the drink claimed to have health benefits, the term moxie came to mean vitality and endurance. It’s still in the American lexicon today! Moxie is still available in some nostalgic soda-pop shops today.

MOXIE is currently just a technology demonstration. Hecht estimates that MOXIE will run for about 10 hours over the next few years. Each of the instrument’s two hour-long experiments will produce only six to ten grams of oxygen, which is enough to sustain a small dog.

If MOXIE is able to successfully demonstrate its ability to generate oxygen during this mission, the next step is to go big. According to Hecht, this entails building a larger compressor and multiplying the electrolysis stacks by a factor of a hundred. The system is designed in such a way that increasing the size and number of stacks increases the amount of oxygen produced.