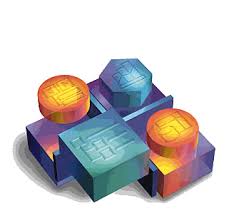 Visual basic is an object oriented; event driven programming language widely used in the industry. In visual Basic, due to its windows interface, users click on certain objects randomly; so each object has to be programmed in dependently to be able to respond to those actions (events).

When we start Visual Basic, we are provided with a VB project. A VB project is a collection of the following modules and files…

On start up, Visual Basic displays the following windows:

It consists of all the controls essential for developing a VB application. Controls are tools such as boxes, buttons labels and other objects drawn on a form to get input or display output.

The form starts off as a black window positioned in the middle of the screen. Controls are placed on the form. In the designed mode, the form has agreed of small dots on it, which is used to position control.

The property box is a window that lists the properties of the form and its controls. While each form and control have there own properties, only one set of controls is shown at a time.

The code for the controls is defined in the code module. The code module window is where we will do all the coding.

To build a Visual Basic application, we need to do the following steps…

Visual Basic provides several ways to access data. They are

This was the first object-based interface that exposed the Microsoft Jet database engine to access native Jet database, a    Number of popular ISAM database and ODBC data sources. DAO is one of he most widely used object-based data access interfaces in use today.

His control use odbc to access ODBC databases e.g. Oracle.

Remote data objects is another object-based data access interface created to provide an interface to ODBC, while still retaining the case of development providing by DAO. RDO did not access Jet or ISAM databases database particularly well and could only access relational database through existing ODBC drivers. RDO has proven to be the interface of choice for a large number of SQL server, Oracle and other large relational DBMS customers. RDO provides the objects, properties and methods needed to access the more complex aspects of stored procedures and complex result sets.

ActiveX data objects are the object-based interface to OLEDB. By using a DAO like approach, developers can now access an event broader variety of data sources using both OLEDB service provider and existing ODBC drivers through its OLEDB foe ODBC intermediate interface.

These libraries call the ODBC API directly. They are available as a separate product.

This is an API-Interface to Microsoft SQL server and build around the C-based DB-Library interface. It is used to access database on both Microsoft and Sybase SQL server and cannot access any other data source.

A data warehouse is an archive of information gatherer from multiple sources, stored under a unified schema, at a single site. Once gathered , the data are stored for a long time , permitting access to historical data . Thus, data warehouses provide the user a single consolidated interface to data, making decision – support queries easier to write. Moreover , by accessing information for decision support from a data warehouse, the decision maker ensures that online transaction-processing systems are not affected by the decision – support workload .

Components of a Data Warehouse :

1. When and how to gather data.

4. How to propagate updates.

5. What data to summarize.

Software requirement specification (SRS) is the starting point of the software development activity. The SRS is the process of the translating the client’s ideas (Input) into formal documentation (Out put). Thus the output of the face is a set of formally specified requirements.

The SRS is the medium through which the client and user needs are accurately specified indeed SRS forms the basis of the Software Development.

A good SRS provide many benefits. Some of the goals so accomplish are:

It is done to obtain a clear understanding of the needs of the Clients and the user and what exactly we desired from the Software. Analysis leads to the actual specification. Analysis involves interviewing the Clients and end users. This people and the existing documents about the current mode of operation are the basic source of information for the analysis.

During this process of analysis a massive amount of information is collected in form of answer to questions, questionnaires, information from the documentation and so on. One of the major problems during analysis is how to organize the information .The second major problem is resolving the contradictions that may exist from the different parties.

There are three principles employed for structuring information during problem analysis. These are.

Data Flow Diagrams can be divided in to 2 types:

This represents the external entity. Each entity should be individually named and angled lines can be used to number these entities.

A process can be defined as the process, which changes the data form on form to another after subjecting the data to various accesses.

The straight lines with arrowheads can be used to define the data flow. These lines carry the data from one process to another. The arrowhead tells about the direction of the data flow.

An open rectangular box will be used to denote store, aplace where the data are to be stored temporary between one process to another or permanently. The data stored can be numbered and named.

It helps an analyst to decide what type of information to obtain at different points in analysis and help in organizing information so that the analyst is not overwhelmed by the complexity of the problem.

This method is a Top-Down approach, which relies heavily on the use of data flow diagrams. The first step in the analysis is to draw the logical equivalents of the DFD for the physical system.

It is a tool, which is used for analyzing the problem. It is always a partial system. There are two approaches to prototyping, i.e.… throwaway and evolutionary.