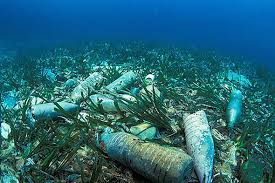 Environmental pollution is a multi-disciplinary science involving chemistry, physics, life science, agriculture, medical science, public health, sanitary engineering etc. In broader sense, it is the study of the sources, reactions, transport, effect and fate of chemical species in the air, water and soil and the effect of human activity upon these.

Pollutant: A substance present in nature, in greater than natural abundance due to human activity, which ultimately has a detrimental effect on the environment and therefrom on living organisms and mankind. Examples are- lead, mercury, sulphur dioxide, carbon monoxide, etc.

Contaminant: A material which does not occur in nature, but is introduced by human activity into the environment, affecting its composition. A contaminant is classified as a pollutant when it exerts a detrimental effect. Example- chlorine gas Experts say that lots of land each year becomes unusable for humans or animals. We hear and make sounds nearly all the time but too much noise can make us feel angry or depressed. The time of day that noises are heard is very important. Radiation
Pollution from radiation can be caused by: Radiation occurs naturally at low levels and is a useful source of power when concentrated.

It can also be very harmful to all living things if they are exposed to too much of it.

Light pollution happens when outside lights, such as a streetlight or a security light, points light upwards into the night sky.

This light gets scattered in the sky and makes an orange foggy glow to appear above a town.

It is likely that we won’t be able to see the stars in the night sky if the amount of light pollution isn’t closely controlled. It is imperative that we carefully utilise our renewable resources of soil, water, plant and animal life to sustain our economic development. Over exploitation of these is reflected in soil erosion, siltation, floods, and rapid destruction of our forest, floral and wildlife resources. The depletion of these resources often tends to be irreversible and since the bulk of our population depends on these natural resources to meet the basic needs, it has meant a deterioration in their quality of life.

Global petroleum deposits are likely to be exhausted within this century. Research is going on for alternatives to fossil fuel (petroleum) based on biomass (green energy). Controlled nuclear fusion holds the prospect of abundant energyif the relatively difficult deuterium-deuterium fusion reaction can be utilised for energy production. This energy source will become unlimited.

Solar energy is both renewable and non-polluting and provides ideal energy source. On a global scale, tapping of only a small fraction of solar energy the earth can supply the entire energy requirement.

In any new development project, due consideration must be given to the environmental, social and cultural impacts. For this purpose, environmental experts must be involved in project planning.

Bush fires, are another type of natural disasters, are of common occurrence in some regions of the world due to hot summer and lightning. During the hot summer months bush fires are common in Australia and in the Pacific coast arid areas in USA.

Man developed science and technology but over the years since the Industrial Revolution (1780- todate) he continued to plunder natural resources thereby polluting the environment. He degraded lands, destroyed forests, threw toxic wastes into rivers and seas and also harmful gases into the atmosphere. This continuous load of manmade pollutants into environment brought about adverse changes, which ultimately back-fired into series of disasters from time to time.

Nuclear Explosions. Two bombs were dropped by USA during World War II (Aug 6 and 9, 1945) on Hiroshima and Nagasaki in Japan. These instantly killed about 6 lakhs people, wiped out the two cities and unleashed radioactive fallout which has caused generations to suffer from various diseases including genetic disorder. Radiation continues to damage plants, soil and biosphere* in the region.

The current global trend in deforestation along with increased combustion of fossil fuels have a cumulative effect on the net increase in carbon dioxide content (present 356 ppm, 50%). Carbon dioxide has the potential to rival nuclear wars in terms of massive irreversible damage to the environment. It is the major greenhouse gas but there are other greenhouse gases- methane (CH4, 19%), chlorofluorocarbons (CFC, 17%), nitrous oxide (N2O, 4%) and water vapour (2%).

In september, 1980 scientists reported a large hole in the ozone layer over Antarctica. CFC was the prime suspect for causing ozone depletion. It was established that one molecule of CFC is capable of destroying one lakh O3 molecule in the stratosphere. The extreme chemical stability and nontoxicity of CFCs enable them to persist for years in the atmosphere and to enter the stratosphere. Depletion of ozone layer above the earth surface helps to penetrate harmful rays from the sun to the earth.