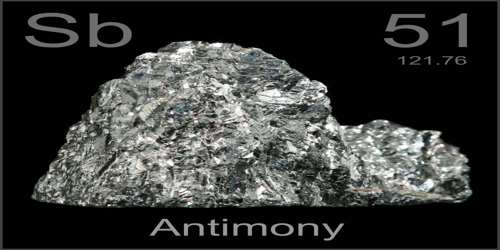 Antimony is a metalloid element having many forms, the most common of which is a hard, very brittle, shiny, blue-white crystal. Antimony compounds have been known since ancient times and were powdered for use as medicine and cosmetics, often known by the Arabic name, kohl. Its atomic number 51; atomic weight 121.76; melting point 630.5°C (1,167°F); boiling point 1,380°C (2,516°F); specific gravity 6.691; valence 3, 5. It is used in a wide variety of alloys, especially with lead in car batteries, and in the manufacture of flameproofing compounds. 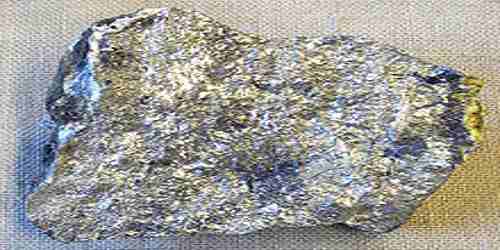 Antimony and its compounds were known to the ancients and there is a 5,000-year old antimony vase in the Louvre in Paris. Antimony sulfide (Sb2S3) is mentioned in an Egyptian papyrus of the 16th century BC. The black form of this pigment, which occurs naturally as the mineral stibnite, was used as mascara and known as khol. The most famous user was the temptress Jezebel whose exploits are recorded in the Bible.

Another pigment known to the Chaldean civilization, which flourished in what is now southern Iraq in the 6th and 7th centuries BC, was yellow lead antimonite. This was found in the glaze of ornamental bricks at Babylon and date from the time of Nebuchadnezzar (604–561 BC).

For some time, China has been the largest producer of antimony and its compounds, with most production coming from the Xikuangshan Mine in Hunan. The industrial methods for refining antimony are roasting and reduction with carbon or direct reduction of stibnite with iron.

Occurrences, Production and Properties of Antimony

Antimony is a silvery-white brittle solid found in the earth’s crust, estimates of the amount of antimony in the crust are between 0.2 and 0.5 ppm. It can be found in over 100 species of minerals. Most commonly as stibnite. It is most often found as antimony (III) sulfide. It is extracted by roasting the antimony (III) sulfide to the oxide, and then reducing with carbon. Antimony can also be found as the native metal. 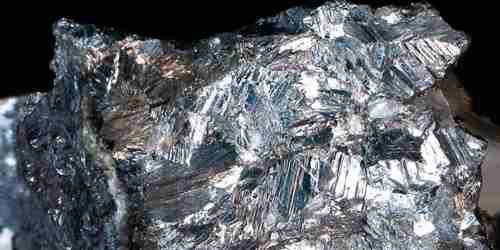 The first natural occurrence of pure antimony in the Earth’s crust was described by the Swedish scientist and local mine district engineer Anton von Swab in 1783; the type-sample was collected from the Sala Silver Mine in the Bergslagen mining district of Sala, Västmanland, Sweden. China produces 88% of the world’s antimony. Other producers are Bolivia, Russia and Tajikistan.

Its elements can be classified based on their physical states (States of Matter) e.g. gas, solid or liquid. This element is a solid. Antimony is classified as a “Metalloid” element and is located in Groups 13, 14, 15, 16 and 17 of the Periodic Table. An element classified as one of the Metalloids has the properties of both metals and Non-Metals. Some are semi-conductors and can carry an electrical charge making them useful in calculators and computers.

Antimony is a chemical element that is recognized by its distinctive atomic symbol of Sb. This atomic symbol is derived from the Latin name for antimony, stibium. The atomic number of antimony is 51 and its atomic weight of 121.8g/mol. A metalloid is a chemical element that has a mixture of properties between a metal and nonmetal. It is also found in chemical compounds such as antimony (II) sulfide. 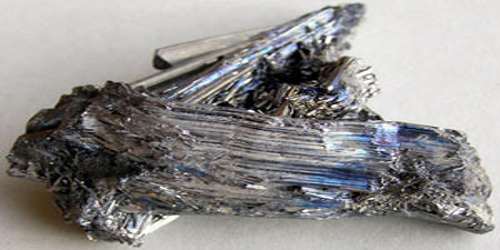 Antimony is stable in air at room temperature, but reacts with oxygen if heated to produce antimony trioxide, Sb2O3. It has two stable isotopes: 121Sb with a natural abundance of 57.36% and 123Sb with a natural abundance of 42.64%. It also has 35 radioisotopes, of which the longest-lived is 125Sb with a half-life of 2.75 years. In addition, 29 metastable states have been characterized. The most stable of these is 120m1Sb with a half-life of 5.76 days. Isotopes that are lighter than the stable 123Sb tend to decay by β+ decay, and those that are heavier tend to decay by β− decay, with some exceptions.

Antimony is used in the electronics industry to make some semiconductor devices, such as infrared detectors and diodes.It is alloyed with lead or other metals to improve their hardness and strength. A lead-antimony alloy is used in batteries. Other uses of antimony alloys include type metal (in printing presses), bullets and cable sheathing. 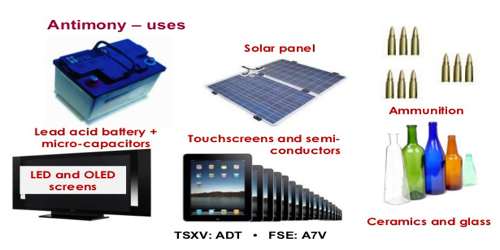 Antimony compounds are also used to make flame-retardant materials, paints, enamels, glass and pottery. Biology and medicine have few uses for antimony. Treatments containing antimony, known as antimonials, are used as emetics. Antimony compounds are used as antiprotozoan drugs. Potassium antimonyl tartrate, or tartar emetic, was once used as an anti-schistosomal drug from 1919 on. It was subsequently replaced by praziquantel. Antimony and its compounds are used in several veterinary preparations, such as anthiomaline and lithium antimony thiomalate, as a skin conditioner in ruminants. Antimony has a nourishing or conditioning effect on keratinized tissues in animals.