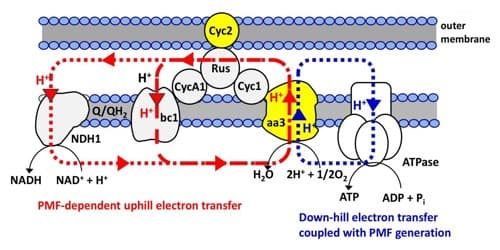 An electrolithoautotroph is an organism that feeds on electricity. These organisms use electricity to convert carbon dioxide to organic matters by using electrons directly taken from solid-inorganic electron donors.

Electrolithoautotrophs are microorganisms which are found in the deep crevices of the ocean. The warm, mineral-rich environment provides a rich source of nutrients. The electron source for carbon assimilation from diffusible Fe2+ ions to an electrode under the condition that electrical current is the only source of energy and electrons. Electrolithoautotrophs form a third metabolic pathway compared to photosynthesis (plants converting light into sugar) and chemosynthesis (animals consuming food).

At deep-sea vent systems, hydrothermal emissions rich in reductive chemicals replace solar energy as fuels to support microbial carbon assimilation. Until recently, all the microbial components at vent systems have been assumed to be fostered by the primary production of chemolithoautotrophs; however, both the laboratory and on-site studies demonstrated electrical current generation at vent systems and have suggested that a portion of microbial carbon assimilation is stimulated by the direct uptake of electrons from electrically conductive minerals. Here we show that chemolithoautotrophic Fe(II)-oxidizing bacterium, Acidithiobacillus ferrooxidans, switch the electron source for carbon assimilation from diffusible Fe2+ ions to an electrode under the condition that electrical current is the only source of energy and electrons. Site-specific marking of a cytochrome aa3 complex (aa3 complex) and a cytochrome bc1 complex (bc1 complex) in viable cells demonstrated that the electrons taken directly from an electrode are used for O2 reduction via a down-hill pathway, which generates proton motive force that is used for pushing the electrons to NAD+ through a bc1 complex. Activation of carbon dioxide fixation by a direct electron uptake was also confirmed by the clear potential dependency of cell growth. These results reveal a previously unknown bioenergetic versatility of Fe(II)-oxidizing bacteria to use solid electron sources and will help with understanding carbon assimilation of microbial components living in electronically conductive chimney habitats.