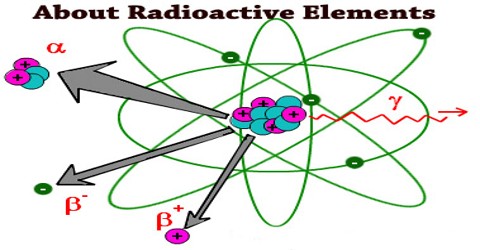 Radioactive elements are just like the other elements. They are made of neutrons, protons, and electrons. The only real difference is that they radiate matter in the form of Alpha particles (Helium nuclei, more specifically the Helium isotope with an atomic mass of four (2 Protons, 2 Neutrons)), Beta positive (positrons), and Beta negative (electrons) particles. Everything around us is made of elements, or different types of atoms. These atoms are way too small to see, but if you break everything down enough, ultimately everything is made of these tiny particles. And although your coffee table or text book might seem pretty stable, not all elements are. Some elements break down over time, including some that make up the objects in your house. These elements are radioactive meaning that they break down over time by releasing energy and turning into different elements. Let’s look next at how this process happens.

Radioactive decay, also known as nuclear decay or radioactivity is the process by which the nucleus of an unstable atom loses energy by emitting radiation, including alpha particles, beta particles, gamma rays, and conversion electrons.

Every atom is made of subatomic particles, neutrons, proteins and electrons. Neutrons and protons make up the nucleus, or core, of an atom. Electrons float in around the nucleus in a cloud like structure. The number of protons in an atom determines which element it is. Radioactive decay is a stochastic (i.e. random) process at the level of single atoms, in that, according to quantum theory, it is impossible to predict when a particular atom will decay, regardless of how long the atom has existed. However, for a collection of atoms, the collection’s expected decay rate is characterized in terms of their measured decay constants or half-lives. This is the basis of radiometric dating. The half-lives of radioactive atoms have no known upper limit, spanning a time range of over 55 orders of magnitude, from nearly instantaneous to far longer than the age of the universe.

There are three main types of radioactive decay.

Alpha Decay: Alpha decay releases the largest particle released during radioactive decay which are made of two neutrons and two protons. This type of decay ejects the subatomic particles very quickly, which can damage our cells if they get into our body.

Beta Decay: Beta decay occurs when one proton turns into a neutron inside the nucleus and one electron is released. Alpha decay often creates unstable isotopes that undergo beta decay as well. Beta particles are a bit lighter than alpha particles, so they can go farther and penetrate materials deeper. Gamma Decay: In gamma decay no particles are released, but the isotopes formed by alpha and beta decay still have too much energy. The energy is released as gamma rays. These rays penetrate the farthest and can even go through a foot of concrete. These rays are very damaging to human beings. Radioactive Elements have a lot of important uses and they also cause some dangerous problems if they are not handled properly. Henri Becquerel first found out about radioactive elements late in the 19th century by placing some photograpic film under uranium salts. The film was in a light-tight envelope, and it was exposed where he put the uranium on it. This behavior was eventually found to be caused by the emission of radiation from the decaying uranium which penetrated the paper envelope and exposed the film. Ever since then, more elements have been investigated for their radioactivity, and different isotopes of elements have different radioactive behavior. Many are used commercially and medically, and others are just nuisances. Small amounts of radioactive materials can be ingested as “radiotracers” to see how certain chemicals are taken up by the body. These are often used in studies to see how medications are absorbed and transported within the body. Thorium, a naturally ocurring radioactive element, is used in making mantles for gas and kerosene lamps because thorium oxide glows brightly when heated. The radioactive elements uranium and plutonium are used in the generation of electricity in nuclear power plants. Small radiactive sources of particles are used in many home smoke detectors. These elements are also used in the production of nuclear weapons. Uranium (U) -235 is the main element used in nuclear power. In huge reactor cores, U-235 is bombed with neutrons. The neutrons trigger the unstable isotope to undergo alpha decay and split into new elements. As the protons and neutrons separate from the original element, they release large quantities of energy called binding energy which held the subatomic particles together.