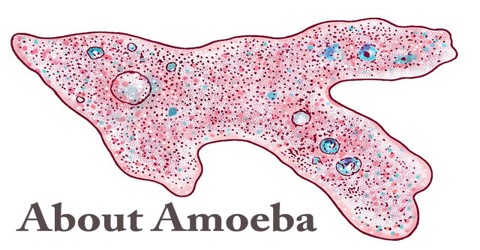 Amoeba is a large genus of naked rhizopod protozoans that have lobed and never anastomosing pseudopodia and are widely distributed in fresh and salt water and moist terrestrial environments. It refers to simple eukaryotic organisms that move in a characteristic crawling fashion. It is a type of cell or organism which has the ability to alter its shape, primarily by extending and retracting pseudopods. The word “amoeba” or “amoeboid” is often used to refer to all protozoa that move using pseudopodia, the word Amoeba refers to a specific genus of protozoa of which Amoeba proteus is the best-know species. Microbiologists often use the terms “amoeboid” and “amoeba” interchangeably for any organism that exhibits amoeboid movement.

The best known amoeboid protists are the “Giant Amoebae” Chaos carolinense and Amoeba proteus, both of which are widely cultivated and studied in classrooms and laboratories. Other well known species include the so-called “brain-eating amoeba” Naegleria fowleri, the intestinal parasite Entamoeba histolytica, which causes amoebic dysentery, and the multicellular “social amoeba” or slime mould Dictyostelium discoideum.

Structure, Function and Nutrition of Amoeba

Amoeba is a single celled organism that appears transparent and gelatin like – with an arguably “forever” changing shape, with a nucleus and membrane bound organelles, such as food vacuoles, contractile vacuoles, golgi apparatus, mitochondria etc. This organism doesn’t have a rigid shape, but it is made of a flexible material that changes shape as needed. An amoeba is made of protoplasm, a viscous, clear material with a cell membrane separating the ectoplasm and the endoplasm, or the outer and inner parts of the cell. The endoplasm contains the nucleus of the cell.

While most amoebas are too small to see with the naked eye, some of the common and giant species grow large enough to see without the aid of a microscope. While most species are harmless, including the parasitic ones, a few can cause real damage. The Entamoeba histolytica causes fatal dysentery in living organisms. The Naegleria fowleri is a deadly amoeba that finds its way to the brain and uses it as a food source. It is found in warm or hot water such as lakes, untreated swimming pools, hot springs and aquariums. Cytoplasm is the living substance which contains all the chemical reactions necessary for life. There are two types of cytoplasm in the amoeba, the darker cytoplasm toward the interior of the amoeba is called endoplasm, and the clearer cytoplasm that is found near the cell membrane is called ectoplasm. By pushing the endoplasm toward the cell membrane, the amoeba causes its body to extend and creep along. It is also by this method that the amoeba consumes its food. A large, disk-shaped nucleus found in the cell controls the growth and reproduction of the amoeba.  Amoeba reproduce through binary fission where the nucleus copies its genetic material and the cytoplasm splits into two new daughter cells, each identical to the original parent. The contractile vacuole removes excess water to the outside from time to time (osmoregulation) so that the amoeba does not burst. Because the concentration of solutes in the cytoplasm is greater than that in the surrounding fresh water, the water tends to enter the cytoplasm by osmosis via the partially permeable cell membrane. Microscopic organisms are taken into the cytoplasm with a drop of water forming a temporary vacuole. These organisms are then digested and then exits through a structure called a food vacuole.

The food sources of amoebae vary. Some amoebas are predatory and live by consuming bacteria and other protists. Some are detritivores and eat dead organic material.

Amoeba typically ingests their food by phagocytosis, extending pseudopods to encircle and engulf live prey or particles of scavenged material. Amoeboid cells do not have a mouth or cytostome, and there is no fixed place on the cell at which phagocytosis normally occurs. Some amoebae also feed by pinocytosis, imbibing dissolved nutrients through vesicles formed within the cell membrane.

Amoeba has been known to cause a range of human diseases. Amebiasis (or amoebic dysentery) is an infection caused by Entamoeba histolytica, a human intestinal parasite. It also causes different infections of the brain. Naegleria fowleri, which has been dubbed “the brain-eating amoeba,” causes primary amoebic meningoencephalitis (PAM). Though the disease is rare, it is almost always fatal. Naegleria fowleri is present in warm freshwater bodies such as hot springs, lakes and rivers, or in poorly chlorinated swimming pools and contaminated, hot, tap water. The amoeba enters from the nose and travels to the brain. Another amoeba, Balamuthia mandrillaris, can cause the brain infection granulomatous amoebic encephalitis (GAE). Balamuthia infections are rare but are most often fatal. It can also play host to bacteria that are pathogenic to humans and aid in spreading such bacteria. Bacterial pathogens such as Legionellacan resist digestion when consumed by amoebae.

Amoebas are an important part of the soil ecosystem. They regulate bacterial populations. Amoebae are also important for recycling nutrients in the soil. When nutrients become available they are taken up by bacteria that “effectively lock up all the nutrients in bacterial mass.” When bacteria are consumed, nutrients are released back into the soil.