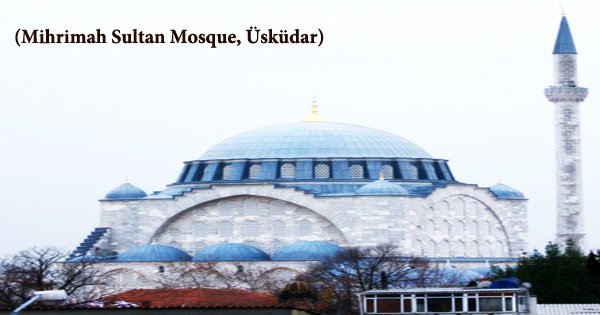 A Visit To A Historical Place/Building (Mihrimah Sultan Mosque, Üsküdar)

The Mihrimah Sultan Mosque (Iskele Mosque, Jetty Mosque, Üsküdar Quay Mosque, Turkish: Mihrimah Sultan Camii, İskele Camii) is one of Üsküdar’s most well-known landmarks, and it gets its name from the nearby ferry landing. It is an Ottoman mosque in Istanbul, Turkey, situated in the historic center of the Üsküdar municipality. The Mihrimah Sultan Mosque is situated near the ancient Theodosian Walls, not far from the historic city center, and features delicate mother-of-pearl touches and ample illumination. Since the mosque was severely damaged by earthquakes in the 18th and 19th centuries, much of what visitors and tourists see today is a reconstruction of the original design. The Mihrimah Sultan Mosque in Üsküdar has the smaller dome and was the first of two Friday mosques built in Istanbul by Mihrimah Sultan, daughter of Sultan Suleiman the Magnificent and wife of Grand Vizier Rüstem Pasha. It was designed by Mimar Sinan, the imperial architect, and constructed between 1543 and 1548. The mosque is topped by a monumental dome and is dappled with windows that allow sunlight into space. It has only one minaret, unlike most imperial mosques. The mosque’s dome and one slender minaret, which occupy the city’s highest point, are significant adornments to the skyline; they are especially prominent on the road from Edirne. Sinan was in love with Mihrimah, who was married to grand vizier Rüstem Paşa, and the symmetry between this mosque and its identically named counterpart in Üsküdar symbolized his disappointed love. As the sun sets behind this mosque, the moon rises behind the other, alluding to Mihrimah’s name, which in Farsi means “sun and moon.” The mosque, which stands on a raised platform, has a spacious, high-vaulted basement, slender minarets, a single-domed baldacchino flanked by three semi-domes ending in three exedrae, and a wide double portico, all of which are hallmarks of Sinan’s mature architecture.

The Chora Museum, the Byzantine Walls, and the remains of Jewish and Greek heritage in the Fener, Balat, and Edirnekapi neighborhoods are often visited by private and small-group tours of Mihrimah Sultan Mosque. Mimar Sinan was the chief imperial architect for a number of sultans, and the building of this mosque developed the aesthetic techniques that he would use in his subsequent works. Half-domes and a focus on small ornamental details became his signature style, allowing the architect to be quickly identified. It is specifically linked to Islamic architecture due to the inclusion of two very slender minarets, a minbar, and an ablution fountain. Earthquakes in 1766 and 1894 severely damaged the mosque. The mosque was restored, but the majority of the other structures were not. The interior has a square floor plan, topped by a massive dome supported by four arches, the tympana of which are lit by three rows of windows. The mosque’s interior is bathed in light, which, combined with the rest of the decor, creates a vivid, upbeat, delicate, “feminine” atmosphere. Due to social and cultural restrictions, royal sultan women were kept out of public life; however, with the right to inherit the land, architecture became an important means of exhibiting royal status to their subjects. The exterior of the Mihrimah Sultan Mosque is made of ashlar, a thinly dressed gray to cream-colored stone. Its interior features imported craved marble that encircles the walls and minbar. Non-Muslims are not permitted to enter the Mihrimah Sultan Mosque during prayer times, which are normally posted in front of the mosque; Friday prayer times are longer.