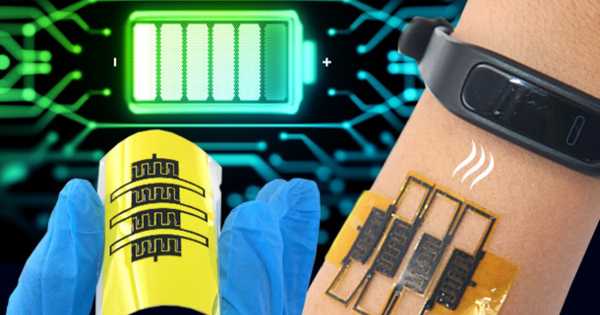 Nanyang Technological University, Singapore (NTU Singapore) researchers have created a soft and stretchable battery that is powered by human perspiration. The prototype battery is made up of printed silver flake electrodes that generate electricity when wet. The battery, which measures 2 cm by 2 cm and is as flat as a small paper bandage, is attached to a flexible and sweat-absorbing textile that is stretchable and attachable to wearable devices such as watches, wrist bands, or arm straps.

The team of scientists tested their device with artificial human sweat to demonstrate its potential use in wearable biosensors and other electronic devices.

In a separate trial, the team reported that an individual wearing the battery around their wrist and cycling on a stationary bicycle for 30 minutes was able to generate a voltage of 4.2 V and output power of 3.9 mW, which was enough to power a commercial temperature sensor device and sends data to a smartphone continuously via Bluetooth.

The battery does not contain heavy metals or toxic chemicals unlike conventional batteries, which are often built using unsustainable materials that are harmful to the environment.

Scientists have developed a soft and stretchable battery that is powered by human perspiration. The prototype battery consists of printed silver flake electrodes that generate electricity in the presence of sweat.

The development of the sweat-powered battery reflects NTU’s commitment to finding solutions to mitigate our impact on the environment by serving as a more sustainable alternative that could reduce harmful electronic waste. This is one of the four grand challenges to humanity that NTU seeks to address in its NTU 2025 strategic plan.

The study’s principal investigator, materials scientist Professor Lee Pooi See, Dean of NTU Graduate College, stated: “Our technology heralds a previously unattainable milestone in wearable device design. We could be looking at a more environmentally friendly way of powering wearable devices that do not rely on conventional batteries by capitalizing on a ubiquitous product, perspiration. It is a near-certain source of energy generated by our bodies. We anticipate that the battery will be able to power a wide range of wearable devices.”

The study was published in the peer-reviewed scientific journal Science Advances in July. A patent application for the sweat-powered battery has also been filed through NTU’s enterprise and innovation company, NTUitive.

Dr. Lyu Jian, a Research Fellow at NTU’s School of Materials Science and Engineering and the study’s co-first author, stated: “Conventional batteries are more affordable and widely available than ever before, but they are frequently made from unsustainable materials that are harmful to the environment. They can also be dangerous in wearable devices, where a faulty battery can leak toxic fluids onto human skin. Our device could provide a real opportunity to completely eliminate those toxic materials.”

Associate Professor Irene Goldthorpe from the Department of Electrical and Computer Engineering at the University of Waterloo in Canada, who is not involved in the research, highlighted the significance of the NTU research team’s work: “Because electronics dislike moisture, wearable devices are typically fully encapsulated to protect them from sweat. Sweat is transformed from a hindrance to an asset in this work, demonstrating that it can improve the conductivity of printed interconnects and even serving as an electrolyte in a wearable, bendable battery. This could usher in a new era in the design of wearable electronics.”

Redefining how batteries are powered

The NTU battery is made by printing silver flakes and hydrophilic poly(urethane-acrylate) (HPUA), which serve as battery electrodes, onto a stretchable textile with ink. When silver flakes come into contact with sweat, the chloride ions and acidity of the sweat cause the flakes to clump together, increasing their ability to conduct electricity. An electric current flows between the electrodes as a result of the chemical reaction.

When the battery material is stretched, its resistance decreases even further, allowing it to be used when subjected to strain, such as when the user is exercising. Because the stretchable textile is very absorbent, it retains a lot of sweat, allowing the battery to stay charged even when the rate of sweating fluctuates. This is important for consistent performance because the amount of human sweat secreted varies depending on the area of the body, the environmental conditions, and the time of day.

Prof. Lee continued, saying: “Our device may be more durable than current technology because we demonstrated that it can withstand the strain from a wearer’s daily activities as well as repeated exposure to stress or sweat. The slim size of our battery also solves two problems in wearable tech: traditional button batteries are difficult to achieve the sleek aesthetics that consumers want, and thinner batteries reduce the item’s ability to carry enough charge to last all day.”

The researchers intend to investigate the effects of other components of human sweat, as well as how factors such as body heat may affect the battery’s performance.