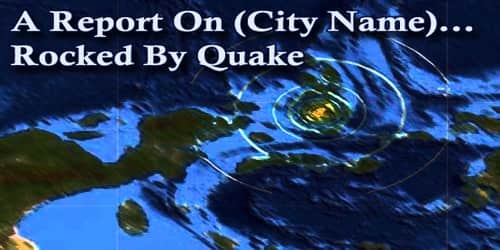 A Report On (City Name)……. Rocked By Quake

A medium-scale earthquake rocked (City name)…… city and some other parts of the country last night at 12:30 pm. It lasted for 7 seconds. According to the National Seismological Institute, the intensity of the quake was 5.6 on the Richter scale. The center of the quake was detected to be in (Country name)…… some, 250 kilometers from (City name)…….

The quake created a serious panic among the city dwellers and the people of the affected places in other parts of the country. Many people jumped off the buildings and hurt themselves. A number of buildings in (Area name)…… have been reported to experience cracks. Police and Fire brigade have evacuated people from those buildings.

About 30 people around the country have been reported to receive an injury. However, no report of death has yet been received. It was the second quake the country experienced this month.

Some experts predict that recurrent small quakes in (City name)…… city is a signal for a major quake. But when asked, a director of the Meteorological Department, (Name)…… said this reporter, “The concern should not be amplified, because although there are a number of fault lines in the geographical area comprising (Country name)……. none of them is active enough to pose a major threat.”