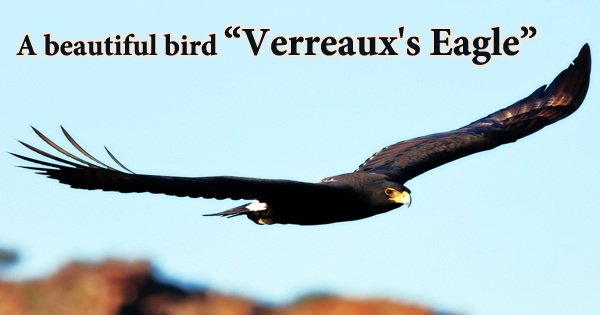 The Verreaux’s eagle (Aquila verreauxii) is a huge, highly specialized bird of prey, with its life history and distribution centered on its main prey, rock hyraxes, and preferred habitat of hilly and rocky terrain. It’s also known as the black eagle, especially in Southern Africa, which could lead to misunderstanding with the Indian black eagle (Ictinaetus malayensis), which dwells in Asia much to the east. Its most populous areas are in the south and east Africa, with occasional sightings in Chad or Western Africa, as well as the Arabian Peninsula and the southern Middle East. It predominantly preys on rock hyraxes, although it also preys on small mammals, birds, and reptiles. Because of its isolation and impassable terrain, its populations have remained steady and have been less influenced by human invasion. This species is particular about where it builds its nest; it loves dry, rocky inliers surrounded by rocky hills and mountains. It tolerates inliers in valleys that are frequently close to savannas, acacia woodlands, or steppes.  It may be seen with certainty in Sudan’s Marrah Mountains (Darfur area), Somalia’s mountains, Ethiopia’s mountains, Uganda’s mountains, and Kenya’s mountains. The Karoo region and the Cape Peninsula are home to vast numbers of these birds, which have a preference for the southern half of the continent. Despite its high level of specialization, Verreaux’s eagle has fared pretty well in terms of conservation in the past. This species, like all eagles, belongs to the Accipitriformes (previously Falconiformes) taxonomic order and the Accipitridae family, which is also known as accipitrids or raptors. Preening, perching, and flying in couples are common sights for Verreaux’s eagles. Outside of the reproductive season, they will mate, which is referred to as pair bonding. Because of its isolation and impassable terrain, its populations have remained steady and have been less influenced by human invasion. The species was named after French naturalist Jules Verreaux, who collected the original specimen for the French Academy of Sciences during a journey to southern Africa in the early 1800s. Adult Verreaux’s Eagles are totally black when perched or at rest, with the exception of a white ‘V’ above the wings on the back and yellow feet/talons and cere (waxy layer covering the base of the upper beak). The unfurled wings reveal a white rump and whitish panels on the outer wings when in flight. The Verreaux’s eagle belongs to the “booted eagles” group of raptors, which are distinguished by the fact that all of the species involved have feathering on their tarsus, whilst most other accipitrids have bare legs.

The Verreaux’s eagle is a huge raptor, with the female being larger than the male and reaching a maximum length of 96 cm. A female can reach a weight of 7 kg and a wingspan of 2.3 meters. It has a golden cere, eye-ring, and legs and is black in color. Males weigh between 3 and 4.2 kg (6.6 to 9.3 lb), while females weigh between 3.1 and 7 kg (6.8 to 15.4 lb). Based on the weights of 21 eagles of both sexes, the average weight is around 4.19 kg (9.2 lb). Females are slightly larger than males, but the sexes are similar. Juveniles have a yellow-brown plumage with a characteristic reddish-brown head and back of the neck. The face and throat are black, and juveniles take four years to mature into adult plumage. Black is the color of the head. Grey with golden cere and gape, the hooked bill is forceful. The eyes are brown with a yellow ring around them. Lores are yellow, with black talons on the legs and feet. Verreaux’s Eagles are frequently seen in couples, either resting on a prominent lookout or soaring and gliding through hilly and rocky terrain. Because of the form of their wings, they can glide up drafts created when wind hits mountain cliffs, allowing them to stay airborne for lengthy periods of time or cover large distances. They can fly into severe winds and still maintain aerial control, unlike other birds. The male’s wing chord is 56.5 to 59.5 cm (22.2 to 23.4 in), whereas the female’s is 59 to 64 cm (22.2 to 23.4 in) (23 to 25 in). Both sexes measure 27.2 to 36 cm (10.7 to 14.2 in) in tail length and 9.5 to 11 cm (3.7 to 4.3 in) in tarsus length, among other typical measurements in Verreaux’s eagles. Adult Verreaux’s Eagles are not vocal, and they rarely call, instead relying on visual communication. The young, on the other hand, are extremely noisy and constantly call out for food and protection whenever their parents are nearby. The call of the young eagle is characterised by a penetrating yieup-yieup–yieup. The Verreaux’s eagle mostly eats rock hyraxes (Procavia capensis), although it also eats monkeys, young baboons, small antelope, squirrels, and hares. Preying on game birds and reptiles has also been observed. The Verreaux’s Eagle prefers rocky gorges and hills in mountainous locations. It can be seen from sea level to 5000 meters above sea level, depending on where hyrax preys are found. Despite having a slightly greater body weight, this species’ estimated daily food requirements are roughly 350 g (12 oz), nearly a third more than a golden eagle. The Verreaux’s Eagle puts on amazing flight displays during the breeding season. It’s a fantastic flier. It dives with closed wings and then rises with open wings, frequently performing a somersault in the process. The males make amazing pendular flight displays, swinging around and around. Both sexes collect branches and sticks to make their nests. In Sudan and Arabia, egg laying occurs from November to August, in Ethiopia and Somalia from October to May, in East Africa all year (with a surge from June to December), and in Africa from Zambia southwards from April to November. 1-2 creamy-white eggs are laid by the female. Both adults take about 43-46 days to incubate. The eggs are elongated ovals, chalky white with a bluish tinge or a few reddish-brown marks, ranging in length from 71 to 83.4 mm (2.80 to 3.28 in) and width from 56 to 62 mm (2.2–2.4 in), with an average of 76.9 mm × 58.6 mm (3.03 in × 2.31 in). The pairs are frequently observed flying together, and they most likely hunt in pairs, with one distracting the target while the other attacks. To avoid predation, nests are placed on rock sides and cliffs.