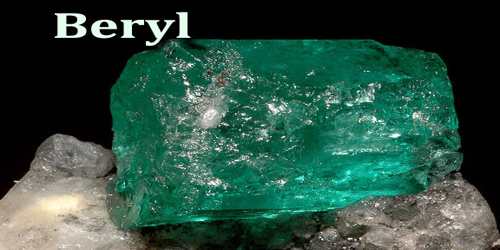 Beryl is a usually green or bluish-green hexagonal mineral occurring as transparent to translucent prisms in igneous and metamorphic rocks. Transparent varieties, such as emeralds and aquamarine, are valued as gems. Beryl is the main source of the element beryllium. Its chemical formula: Be3Al2Si6O18. 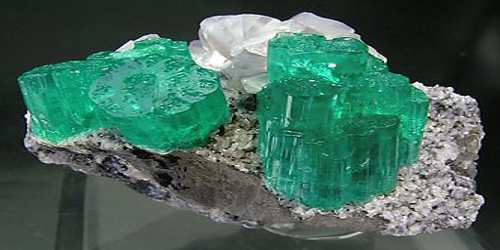 Many of the Beryl varieties are very important gemstones. In fact, all the transparent varieties of Beryl have been used as gemstones, although Emerald and Aquamarine are by far the most important and well-known varieties. Pure beryl is colorless, but it is frequently tinted by impurities; possible colors are green, blue, yellow, red (the rarest), and white.

Beryl is naturally transparent; however inclusions and impurities may make it opaque. All gemmy transparent varieties are highly valued, but the other forms of Beryl in opaque crystals are much more common. Some of the largest natural crystals known are of Beryl, with enormous crystals having been found in several pegmatite occurrences.

Properties and Values of Beryl

The bases of Beryl crystals are usually flat; pyramidal terminations are rare. Also occurs in columnar aggregates, in distorted etched crystals, and massive. Occasionally in drusy or platy aggregates and as bundles of thin, long crystals. Crystals may be striated lengthwise. 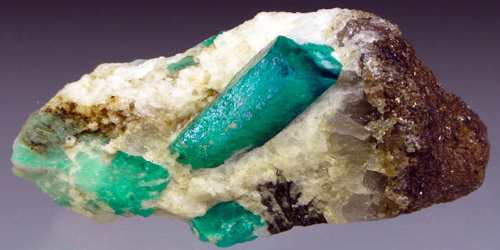 Beryl often crystallizes in perfect, six-sided hexagons. Crystals are usually as individual prismatic hexagons. Crystals may be enormous in size; some 30 foot long (8 meter), well-crystallized examples have been found. Beryl may also be short, stubby crystals, and occasionally in tabular crystals and plates.

Top values go to clarity first, with color a close second. Since beryls are available in large sizes, there is usually no incremental price increase for large beryls.  All beryls hold the same value above about three carats. Most beryl: inert, LW and SW. Goshenite: inert to weak pink or yellow, LW and SW. Morganite: inert to weak pink or purple, LW and SW. Emerald: See “Spectral Properties” under “Identifying Characteristics” in the emerald entry. 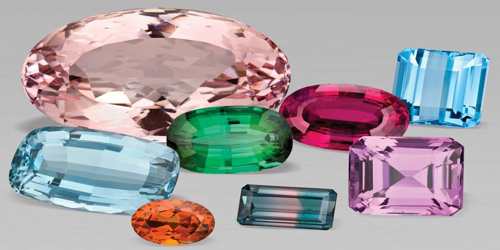 Pure Beryl is colorless. Aquamarine, another important gemstone, is the greenish-blue to blue variety of Beryl. Green Beryl from certain localities can be heat treated to produce sky-blue Aquamarine. Other popular gem varieties of Beryl are the pink Morganite, and the yellow Heliodor and Golden Beryl. A deep red variety of Beryl, known as Red Beryl (or Bixbite) is extremely rare, and only comes from two localities in Utah. When in good specimens, Red Beryl commands an outstanding premium and is very difficult to obtain.