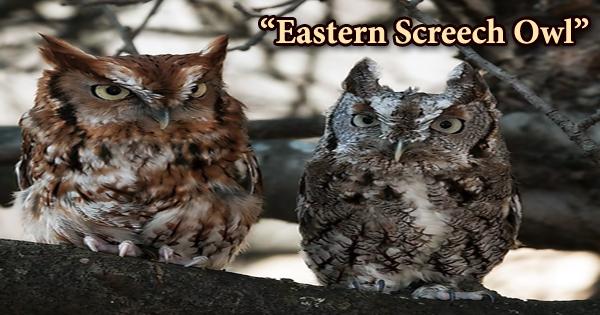 The eastern screech owl (Megascops asio), sometimes known as the eastern screech-owl, is a widespread avian predator that emerges at nightfall from its nest or roost hole to hawk insects or hunt other small prey such as songbirds and mice. It’s a tiny owl that can be found from Mexico to Canada in Eastern North America. The Eastern Screech-Owl can be found in woodlands, suburbs, and parks east of the Rockies, and they’re even willing to nest in home nest boxes. During the day, these superbly camouflaged birds conceal in crevices and tree holes. This owl is native to most woodland areas across its range, and it has adapted to anthropogenic development better than any other owl in its range, despite its strictly nocturnal habits, which allow it to avoid observation. Its whinnying and trilling songs are well-known, but it also uses rasps, barks, hoots, chuckles, and screeches in its vocalizations. Its hunting is mostly nocturnal but often crepuscular and occasion­ally diurnal. Male Eastern Screech-Owls are smaller than females, as are most raptors, and are more agile fliers and hunters. The female does not hunt when on the nest; instead, she and the chicks rely on the male to bring them food. The male’s voice is deeper than the female’s, despite his diminutive size. Despite their name, screech-owls do not actually screech; instead, their vocalizations consist of whinnies and mild trills. Adults range from 16 to 25 cm (6+1⁄2 to 10 in) in length and weigh 121–244 g (4+1⁄4–8+5⁄8 oz). Among the differently sized races, length can average from 19.5 to 23.8 cm (7+11⁄16 to 9+3⁄8 in). The wingspan can range from 46 to 61 cm (18 to 24 in). The Eastern Screech-Owl is a stocky, short-legged bird with a huge head and no neck. It has rounded wings and a short, square tail. The tufts of pointed ear tufts on its head are frequently high, giving it a striking profile. They have a huge, spherical head with conspicuous ear tufts, yellow eyes, and a yellowish beak that is 1.45 cm (916 in) long on average. The feet are normally feathered down to the toes and are very robust and powerful compared to more southern screech owls, while the southernmost populations only retain remnant bristles rather than full feathering on the legs and feet. Eastern Screech-Owls can be either gray or predominantly reddish-brown in color (rufous). They are decorated with elaborate bands and dots that provide the bird superb camouflage against tree bark, regardless of overall color; eyes are yellow.

The eastern screech owl (and its western counterpart) are among the heaviest screech owls; the largest tropical screech owls do not exceed them in average or maximal weight; however, due to their relatively short tails, Balsas (M. seductus), long-tufted (M. sanctaecatarinae), white-throated (M. albogularis), and rufescent owls (M. seductus), in roughly increasing order, outnumber them in length. Eastern Screech-Owls are nocturnal and are far more frequently heard than seen. Most bird watchers are only familiar with this species’ trilling or whinnying sound. This cavity-roosting owl, on the other hand, can be drawn to nest boxes or, if you’re lucky, observed in daylight at the entrance to its tree cavity home. Screech owls use their tiny talons and beaks to catch their prey, which are usually small rodents. Frogs, snakes, and larger insects such as grasshoppers are other favorites. Because they prefer to nest in cavities, they can be found under attic overhangs, beneath bridges, and on ledges in parking garages. It builds its nest in old woodpecker holes or natural tree cavities, and it uses nest boxes that are appropriately sized and placed. Courtship takes place from late January to mid-March, with the male announcing his presence as well as probable nesting sites. Eastern screech owls can be found from sea level to 1,400 meters (4,600 feet) in elevation in the eastern Rocky Mountains, and up to 1,500 meters (4,900 feet) in the eastern Sierra Madre Oriental Mountains, though their altitudinal limits in the Appalachian Mountains, near the heart of their distribution, are unknown. This species’ partners are usually monogamous and stay together for the rest of their lives. Some men, on the other hand, will mate with two distinct females at the same time. The second female has the ability to evict the first female from the nest, lay her own eggs, and incubate both batches. This species begins egg laying around two months after great horned owls, but approximately two weeks before American kestrels (Falco sparveius), and lays its first egg in April practically everywhere in its range. Eggs are laid every two days, and incubation begins when the first egg is placed. For another 8 to 10 weeks, the juvenile is completely reliant on his or her parents. The eastern and western were previously classed as a single species, and the range separation is still unknown. While captive Eastern Screech Owls can live for more than 20 years, wild birds are unlikely to do so. Adult and juvenile death rates could be as high as 70% and 30%, respectively. When it was discovered in Ontario in 1968, the oldest recorded Eastern Screech-Owl in the wild was at least 14 years, 6 months old, the same province where it had been banded in 1955.