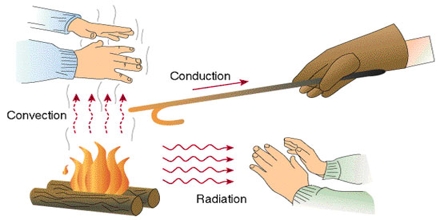 There are three ways of Heat Transfer: Convection; Conduction and Radiation. Conduction–transfer of heat between atoms as they collide within a substance. Convection is the movement of matter due to differences in density that are caused by temperature. Radiation is the transfer of energy by electromagnetic waves, such as visible light and infrared waves.