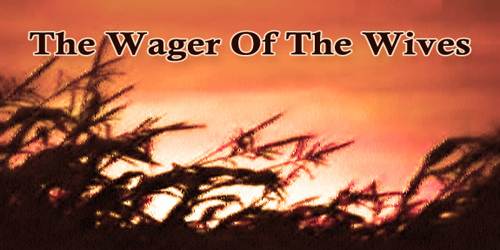 The Wager Of The Wives

Once upon a time, two women met in the marketplace and began to argue about their husbands.

“Now my husband is the biggest fool in all the world,” said the first woman. “Why, I can play a trick on him any old time.”

“Oh no, not compared to my husband,” said the second woman. “There’s no man in the world more foolish than the man I married.”

Back and forth they went, their argument becoming more heated. At last, they decided to make a wager.

“I’ll show you what a fool my husband is,” said the first woman.

“And I’ll show you,” the second agreed.

“Two weeks from today we shall meet in the church. One way or another, each of us shall have to make our case.”

And with that, they parted ways.

Back home, the first woman sat down at her spinning wheel. There, with great concentration, she began to spin, except she was spinning nothing but air.

When her husband came home, he laughed at the sight of her flying fingers spinning nothing but air. “What on earth are you doing?” he asked.

She looked up and scowled at him. “Why, can’t you see? I’m spinning with the finest linen ever made. I plan to make you the most beautiful suit imaginable. No one in the village will have a suit as fine as yours. I shouldn’t think you’d laugh at a wife who works so hard to make her husband look good.”

Now he felt ashamed for doubting his wife, and when he thought of such a marvelous suit, he swelled with pride. He sat and ate his supper, all the while smiling as his wife went on spinning. When she was finished there, she set up her loom.

“Now that I have enough thread to weave your suit, I shall set to work. This may take some time. You’ll have to be patient, but I promise, in two weeks’ time we’ll go to church and you shall be a spectacle to behold!” Oh, but he felt proud.

In the meantime, on the other side of town, the second wife greeted her husband when he came home from work. She met him at the door, took one look at his face, and gasped in feigned horror. “To bed with you! Now!” she screamed.

“What?” her husband asked. He was confused, for it was early evening. “Why on earth should I go to bed?”

“My heavens, you’re a fool,” she said. “You’re horribly sick, that’s why. Terribly, terribly ill.” And with that, she pulled down the comforter and beckoned him into his bed.

Still reeling, the man crawled into bed, and as soon as he lay down, he understood that he must be ill indeed, for his wife brought him salves, bromides, soothing teas, and soups, and never once did she leave his side.

“I ought to go to work, don’t you think?” he asked after five days, but his wife burst into tears. “Oh, if only you could,” she sobbed. “If only you were not so ill, my darling,” and she pressed a cool compress to his forehead and gripped his hand.

Days passed, and he languished in bed.

On the far side of town, the first wife let out a great sigh. “I’ve finished!” she cried. “The material is ready. Ohh, it feels so silky and soft. Now I shall wash it and sew it together.”

“Wonderful,” her husband cried, clapping his hands together. “I’ll be so handsome no one will recognize me.”

When the invisible cloth was dry, she pretended to cut out the patterns and sew the suit together. Finally, she said, “Shall we try the suit on now?” And she stood beside him and pretended to hold up an arm here, a leg there.

“Oh my!” she cried when she was finished and her husband stood before her, dressed only in his underwear.

He was beaming with pleasure, for he was, no doubt about it, a fool.

Now the sick man lay in bed groaning in pain when his wife asked, “Who would you like to carry your coffin, my love?”

“What do you mean?” the frightened man asked.

“How can you ask me such a question?” the woman wept. “Don’t you know you died last night?”

Now the poor man believed this was true, and that very night she laid him in his coffin and called all the villagers to meet her at church the next morning so that everyone could say their last farewells.

In the morning the church was full, and people passed slowly by the coffin where the man lay still, letting their tears fall on his poor dead chest. Oh, he felt sad to be dead.

Everyone was sad, of course, but just then in strode the other fool, dressed in his invisible suit.

“What’s this?” somebody asked, and everyone turned, and when they saw the fool, clad only in his underwear, they burst out laughing. When the man in the coffin saw him, he couldn’t help himself. He sat up and cried, “Oh my, you are a fool, and I would laugh, too, if only I were not lying here dead!”

Naturally, the burial was canceled after that, and there was much laughing and teasing of the two gullible husbands. But as for the wager, no one could ever decide which of the two women had won, for certainly, both husbands were fools.