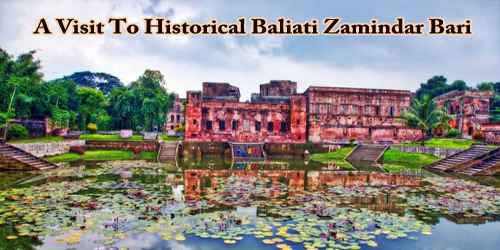 Last year, during the winter vacation, I had a chance to visit “Baliati Zamindar Bari”, in the company of some friends. It is an important historical building in our country. Baliati Zamindar Bari (Bengali: বালিয়াটি জমিদার বাড়ি) is located at the village of Baliati, in Saturia Upazila in Manikganj District, Bangladesh. It is the palace of the Zamindars, the Baliati Zamindari who ruled over a large area. The Baliati Jamindar Bari is located at 23.9952°N 90.0419°E. This splendid antique Roman-style architectural palace is one of the most famous archaeological sites near the capital city. This colossal palace complex is also one of the largest colonial-era Zamindar palaces still existing in Bangladesh. The history was inscribed in its bricks. It is surely a treat for our eyes. Enclosed by ponds, the huge palace is divided into four blocks inhabited by the four successors of the zamindar. There is a statue of a roaring lion. This statue symbolizes the wealth and power of the zamindar family. The zamindars of Baliati were renowned for their contribution in spreading education in this part of Bengal. Gobinda Ram Shaha (Bengali: গোবিন্দ রাম সাহা) was the settler of the Zamindari at Baliati. He was a salt merchant. He inherited the business from his parent, then he extended that business further and established the zamindari. The zamindari extended to Narayanganj District.

There are seven palaces. The palace area occupies around 5.88 acres (23,800 m2) of land, enclosed within a moat and a perimeter wall. There are about 200 rooms inside the premises. At the back of the Palace is a pond (dighi). At the end of the 18th century, Zamindar Harendra Kumar Roy Chowdhury officially sold some parts of the Zamindari of Narayanganj to Sreemoti Alladi BiBi who was the owner of Talluk and her husband Zamindar Rahim Bakhsh Haji. The palaces have been administered by the Bangladesh archeological department since 1987. And it is said that after separation in 1947, all the ancestors left for India. The palace is open from 10:00 am to 6:00 pm in summer (April to September) and in winter (October to March) it is open from 9:00 am to 5:00 pm. On Mondays, it opens at 2:00 pm and remains closed on Sundays. The ticket price is Tk. 20. For SAARC tourists it costs Tk. 100. For foreigners the charge is Tk. 200 and for students it is Tk. 5. This historical site can be a great place for learning, recreation, and entertainment for the tired city dwellers. It was my first visit to this historical monument. I returned home unwillingly and carried away in my mind a happy memory of my visit to this historical place.