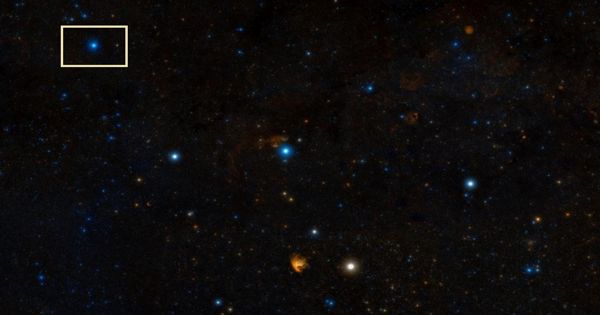 V509 Cassiopeiae – a Yellow Hypergiant Star in the Cassiopeia Constellation

V509 Cassiopeiae is a yellow hypergiant in the Cassiopeia constellation. It is a very luminous Supergiant Star-type star. It is one of two yellow hypergiant stars found in the constellation Cassiopeia, which also contains Rho Cassiopeiae. It is a G0IA supergiant star based on the spectral type that was recorded in the Hipparcos star catalogue. It is 900 times bigger than the Sun. The star can be seen with the naked eye, that is, you don’t need a telescope/binoculars to see it. Current estimates suggest there are no more than 15 of these stars in the entire galaxy.

V509 Cassiopeiae is a Yellow Hypergiant in Cassiopeia. It is 15,688 Light Years away from the Sun.

V509 Cassiopeiae has an apparent magnitude of 5.10, this is a measure of the brightness of the star as seen from Earth. It is around 15,700 light-years from Earth. It has an apparent magnitude that has varied from below +6 in historical times to a peak of +4.6 and now around +5.3 and is classified as a semiregular variable star of type SRd. Yellow hypergiants are an extremely short-lived phase of the late stellar evolution of massive O-type stars. It is undergoing strong mass loss as part of its rapid evolution and has recently passed partway through the yellow evolutionary void by ejecting around a solar mass of material in 20 years. These stars evolve from red hypergiants to blue hypergiants in a phase that lasts only a few thousand years.

It appears that V509 Cassiopeiae is not just varying in brightness and fluctuating in temperature and size like most unstable stars, but is actually undergoing a secular evolutionary shift from cooler to hotter temperatures. It currently has 11 solar masses and a radius 600 times larger than Sol; this would encompass the Sol system past the orbit of Mars.

V509 has varied significantly in temperature and size over periods as short as 1 year, indicating that this phase is highly unstable. The temperature can be estimated with some accuracy from the spectral and color observations. The calculated effective temperature increased from 4,500K in 1900 to 5,000K in 1960. It resembles the bigger Rho Cas, which is nearly in the same direction. Maybe it has just started to become a red supergiant, maybe it is shortly before collapsing. At that stage, the luminosity was around 243,000 L☉ and the radius 680 R☉.