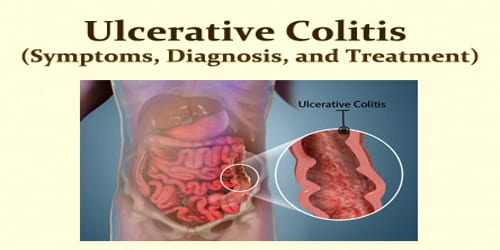 Definition: Ulcerative colitis (UC) is a fairly common chronic, or long-term, disease that causes inflammation of the large intestine (also called the colon). It is a form of inflammatory bowel disease (IBD) that has some similarity to Crohn’s disease. The colon, or large intestine, removes nutrients from undigested food and gets rid of waste products through the rectum and anus when we pass feces.

Ulcerative colitis inflammation may cause abdominal pain, diarrhea and other symptoms that vary from person to person and from mild to severe. Symptoms typically occur intermittently with periods of no symptoms between flares. Complications may include megacolon, inflammation of the eye, joints, or liver, and colon cancer.

While this disease affects people of all ages, most people are diagnosed between the ages of 15 and 35. After age 50, another small increase in diagnosis for this disease is seen, usually in men.

Several medications are used to treat symptoms and bring about and maintain remission, including aminosalicylates such as mesalazine or sulfasalazine, steroids, immunosuppressants such as azathioprine, and biologic therapy.

The disease is more common in North America and Europe than in other regions. Often it begins in people aged 15 to 30 years, or among those over 60. Males and females appear to be affected in equal proportions. With appropriate treatment, the risk of death appears the same as that of the general population. 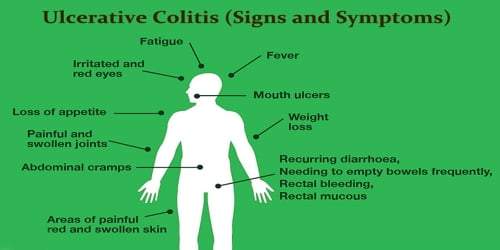 Common symptoms of ulcerative colitis include:

Ulcerative colitis (UC) may cause additional conditions such as:

Ulcerative colitis is unpredictable and can be progressive (get worse). Over time, people’s symptoms may change in severity or change altogether. People may go through periods of remission—when they have few or no symptoms. Their symptoms may also come on suddenly, without warning. 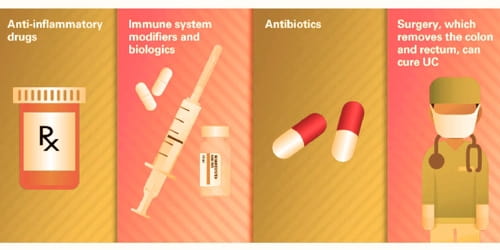 Diagnosis and Treatment of Ulcerative Colitis: A doctor will ask about symptoms and medical history, and try to find out whether any close relatives have had ulcerative colitis, IBD, or Crohn’s disease. They will also examine the patient for signs of anemia and tenderness in the abdominal area.

This disorder mimics other bowel diseases such as Crohn’s disease. The doctor will run multiple tests to rule out other conditions. Tests to diagnose ulcerative colitis often include:

Although ulcerative colitis is a disease of unknown causation, an inquiry should be made as to unusual factors believed to trigger the disease. The simple clinical colitis activity index was created in 1998 and is used to assess the severity of symptoms.

Medication: Ulcerative colitis can be treated with a number of medications, including 5-ASA drugs such as sulfasalazine and mesalazine. Corticosteroids such as prednisone can also be used due to their immunosuppressive and short-term healing properties, but because their risks outweigh their benefits, they are not used long-term in treatment. Immunosuppressive medications such as azathioprine and biological agents such as infliximab and adalimumab are given only if people cannot achieve remission with 5-ASA and corticosteroids.

Vedolizumab (Entyvio) medication was recently approved for the treatment of ulcerative colitis for people who don’t respond to or can’t tolerate other treatments. It works by blocking inflammatory cells from getting to the site of inflammation.

Surgery: If other treatments do not work, surgery may be an option.

A type of leukocyte apheresis, known as granulocyte and monocyte adsorptive apheresis, still requires large-scale trials to determine whether or not it is effective. Results from small trials have been tentatively positive.

Define and Discuss on Odiosoft Rhino