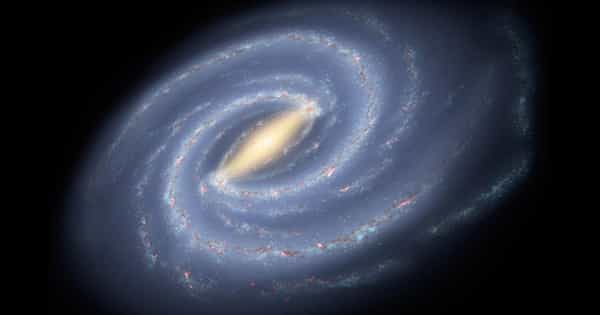 There are Cold Planets all over our Galaxy, including the Galactic Bulge

The majority of the exoplanets discovered are within 3,300 light-years of Earth, leaving the distribution of planets in the rest of the Milky Way a mystery. To answer this question, an astronomical team led by Naoki Koshimoto (NASA Goddard Space Flight Center) examined observations of 28 planets discovered using gravitational microlensing, a technique that can detect planets at much greater distances than transit or radial-velocity techniques. They compared the observed microlensing events to what would be expected if planets were clustered near the galactic center, sequestered on the galactic disk’s edges, or distributed more evenly throughout the Milky Way.

The distribution of cold planets in the Milky Way was inferred using observations and modeling. The results indicate that the distance from the galactic center has little effect on this distribution. Cold planets appear to exist throughout our galaxy, even in the galactic bulge, where their presence was previously unknown. The findings could help us better understand the planetary formation and its history in the Milky Way.

Although thousands of planets have been discovered in the Milky Way, the majority of them are located within a few thousand light-years of Earth. However, because our Galaxy spans more than 100,000 light-years, studying the Galactic distribution of planets is difficult. However, a research team has discovered a way to overcome this barrier.

Researchers combined observations and modeling to infer the distribution of cold planets in the Milky Way. The results suggest that this distribution is not strongly dependent on the distance from the galactic center.

Researchers led by Osaka University and NASA used a combination of observations and modeling in a study published in The Astrophysical Journal Letters to determine how the probability of planet-hosting varies with distance from the Galactic center.

A galactic bulge is a densely packed cluster of stars within a larger star formation. The term almost always refers to the central group of stars found in the majority of spiral galaxies. Bulges were previously thought to be elliptical galaxies with a disk of stars around them, but high-resolution Hubble Space Telescope images have revealed that many bulges lie at the heart of a spiral galaxy. It is now thought that there are at least two types of bulges: those that resemble ellipticals and those that resemble spiral galaxies.

The findings were based on a phenomenon known as gravitational microlensing, in which planets act as lenses, bending and magnifying light from distant stars. This effect can be used to detect cold planets like Jupiter and Neptune all the way through the Milky Way, from the Galactic disk to the Galactic bulge – our Galaxy’s central region.

“Gravitational microlensing is currently the only way to investigate the distribution of planets in the Milky Way,” says co-author Daisuke Suzuki. “However, little is known until now, owing to the difficulty in measuring the distance to planets more than 10,000 light-years from the Sun.”

The findings show that the planetary distribution is not strongly affected by distance from the Galactic center. Instead, cold planets far from their stars appear to exist everywhere in the Milky Way. This includes the Galactic bulge, which has a very different environment than the solar neighborhood and where the presence of planets has long been speculated.

“Stars in the bulge region are older and much closer to each other than stars in the solar neighborhood,” says Naoki Koshimoto, the study’s lead author. “Our discovery that planets exist in both of these stellar environments may lead to a better understanding of how planets form and the history of planet formation in the Milky Way.”

The researchers believe that the next step should be to combine these findings with measurements of microlens parallax or lens brightness, two other important parameters associated with planetary microlensing.