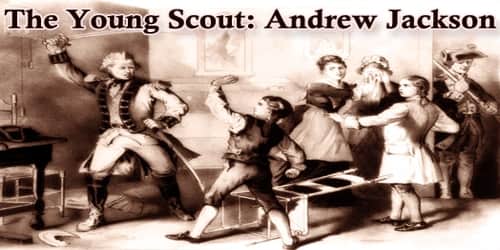 When Andrew Jackson was a little boy he lived with his mother in South Carolina. He was eight years old when he heard about the ride of Paul Revere and the famous fight at Lexington.

It was then that the long war, called the Revolutionary War, began. The king’s soldiers were sent into every part of the country. The people called them the British. Some called them “red-coats.”

There was much fighting, and several great battles took place between the British and the Americans.

At last Charleston, in South Carolina, was taken by the British. Andrew Jackson was then a tall white-haired boy, thirteen years old. “I am going to help drive those red-coated British out of the country,” he said to his mother.

Then, without another word, he mounted his brother’s little farm horse and rode away. He was not old enough to be a soldier, but he could be a scout and a good scout he was.

He was very tall as a man. He was not afraid of anything. He was strong and ready for every duty.

One day as he was riding through the woods, some British soldiers saw him. They quickly surrounded him and made him their prisoner.

“Come with us,” they said, “and we will teach you that the king’s soldiers are not to be trifled with.”

They took him to the British camp.

“What is your name, young rebel?” said the British captain.

“Well, Andy Jackson, get down here and clean the mud from my boots.”

Andrew’s gray eyes blazed as he stood up straight and proud before the haughty captain.

“You rebel!” shouted the captain. “Down with you, and clean those boots at once.”

The slim, tall boy seemed to grow taller, as he answered, “I’ll not be the servant of any Englishman that ever lived.”

The captain was very angry. He drew his sword to hit the boy with its flat side. Andrew threw out his hand and received an ugly gash across the knuckles.

Some other officers, who had seen the whole affair, cried out to the captain, “Shame! He is a brave boy. He deserves to be treated as a gentleman.”

Andrew was not held long as a prisoner. The British soldiers soon returned to Charleston, and he was allowed to go home.

In time, Andrew Jackson became a very great man. He was elected to Congress, he was chosen judge of the supreme court of Tennessee, he was appointed general in the army, and lastly, he was for eight years the president of the United States.