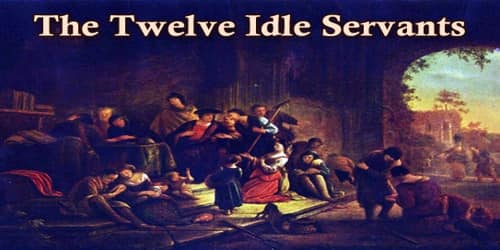 Twelve servants who had done nothing all the day would not exert themselves at night either, but laid themselves on the grass and boasted of their idleness. The first said, “What is your laziness to me, I have to concern myself about my own? The care of my body is my principal work; I eat not a little and drink still more. When I have had four meals, I fast a short time until I feel hunger again, and that suits me best. To rise betimes is not for me; when it is getting near mid-day, I already seek out a resting-place for myself. If the master call, I do exactly as if I had not heard him, and if he calls for the second time, I wait a while before I get up, and go to him very slowly. In this way life is endurable.”

The second said, “I have a horse to look after, but I leave the bit in his mouth, and if I do not want to do it, I give him no food, and I say he has had it already. I, however, lay in the oat-chest and sleep for four hours. After this, I stretch out one foot and move it a couple of times over the horse’s body, and then he is combed and cleaned. Who is going to make a great business of that? Nevertheless, the service is too toilsome for me.”

The third said, “Why plague oneself with work? Nothing comes of it! I laid myself in the sun and fell asleep. It began to rain a little, but why should I get up? I let it rain on in God’s name. At last came a splashing shower, so heavy indeed, that it pulled the hair out of my head and washed it away, and I got a hole in the skull; I put a plaster on it, and then it was all right. I have already had several injuries of that kind.”

The fourth said, “If I am to undertake a piece of work, I first loiter about for an hour that I may save up my strength. After that, I begin quite slowly and ask if no one is there who could help me. Then I let him do the chief of the work, and in reality, only look on; but that also is still too much for me.”

The fifth said, “What does that matter? Just think, I am to take away the manure from the horse’s stable, and load the cart with it. I let it go on slowly, and if I have taken anything on the fork, I only half-raised it up, and then I rest just a quarter of an hour until I quite throw it in. It is enough and to spare if I take out a cartful in the day. I have no fancy for killing myself with work.”

The sixth said, “Shame on ye; I am afraid of no work, but I lie down for three weeks, and never once take my clothes off. What is the use of buckling your shoes on? For aught I care they may fall off my feet, it is no matter. If I am going up against some steps, I drag one foot slowly after the other on to the first step, and then I count the rest of them that I may know where I must rest.”

The seventh said, “That will not do with me; my master looks after my work, only he is not at home the whole day. But I neglect nothing, I run as fast as it is possible to do when one crawls. If I am to get on, four sturdy men must push me with all their might. I came where six men were lying sleeping on a bed beside each other. I lay down by them and slept too. There was no wakening me again, and when they wanted to have me home, they had to carry me.” The eighth said, “I see plainly that I am the only active fellow; if a stone lies before me, I do not give myself the trouble to raise my legs and step over it. I lay myself down on the ground, and if I am wet and covered with mud and dirt, I stay lying until the sun has dried me again. At the very most, I only turn myself so that it can shine on me.”

The ninth said, “That is the right way! To-day the bread was before me, but I was too idle to take it, and nearly died of hunger! Moreover, a jug stood by it, but it was so big and heavy that I did not like to lift it up, and preferred bearing thirst. Just to turn me around was too much for me, I remained to lie like a log the whole day.”

The tenth said, “Laziness has brought misfortune on me, a broken leg and swollen calf. Three of us were lying on the road, and I had my legs stretched out. Someone came with a cart, and the wheels went over me. I might indeed have drawn my legs back, but I did not hear the cart coming, for the midges were humming about my ears, and creeping in at my nose and out again at my mouth; who can take the trouble to drive the vermin away?”

The eleventh said, “I gave up my place yesterday. I had no fancy for carrying the heavy books to my master any longer or fetching them away again. There was no end of it all day long. But to tell the truth, he gave me my dismissal, and would not keep me any longer, for his clothes, which I had left lying in the dust, were all moth-eaten, and I am very glad of it.”

The twelfth said, “To-day I had to drive the cart into the country, and made myself a bed of straw on it, and had a good sleep. The reins slipped out of my hand, and when I awoke, the horse had nearly torn itself loose, the harness was gone, the strap which fastened the horse to the shafts was gone, and so was the collar, the bridle and bit. Someone had come by, who had carried all off. Besides this, the cart had got into a quagmire and stuck fast. I left it standing, and stretched myself on the straw again. At last the master came himself and pushed the cart out, and if he had not come I should not be lying here but there, and sleeping in full tranquility.”