Home Other The Seasons in Bangladesh 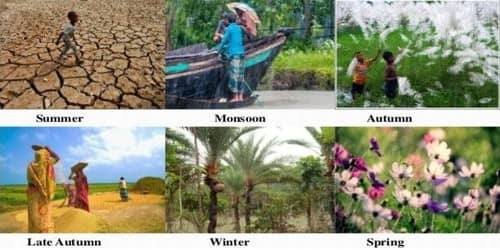 Bangladesh is the favorite playground of nature. Nature has decorated this ground with six seasons. Each season consists of two months. The seasons of Bangladesh are the summer, rainy season, autumn, late autumn, winter, and the spring. There is a great variety of the features of these seasons. As a result, nature never gets monotonous for us.

Summer is the first season in Bengali calendar. Baishakh and Jaistha are the summer months. During summer, the sun shines hotly. The water of ponds, canals, small rivers, etc. is dry up. This is the season of juicy fruits. Various seasonal fruits are ripe in this season. Mangoes, jack-fruits, blackberries, and melons are available in this season.

The Bengali months ‘Ashar’ and ‘Shravan’ constitute the rainy season. In this season, the sky remains cloudy and it rains heavily. Sometimes, it rains for days together. Often the rivers overflow and cause a flood. The roads get muddy. About 60-70% of the total yearly rainfall is recorded in this season. It cools the air after the burning heat of summer. Ponds, tanks, canals, and rivers are full to the brim in this season. The season is regarded as a blessing because agriculture of Bangladesh depends largely on rainwater.

‘Bhadra’ and ‘Aswin’ are the months of the autumn. The cloudy sky clears up at the advent of autumn. White and light patches of the cloud are noticed here and there in the sky. But rain is not so copious in this season. It is a season of the light cloud without rain. The principal cash crop of Bangladesh ‘Jute’ is harvested and prepared for sale in this season. The season also has its own flattery decoration. 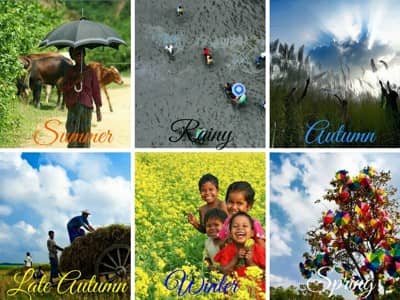 After late autumn, there appears the late autumn or ‘Hemonta’. Bengali months ‘Kartik’ and ‘Agrayhayan’ constitute this season. This is the harvesting season of the year. The golden paddy in the fields fills the minds of the farmers with joy. The sky looks blue and clear. Harvesting of paddy then fills every mind with great joy.

After the late autumn, there comes the winter. Its duration encounters the two Bengali months ‘Poush’ and ‘Magh’. The fundamental features of winter in our country are its fog and chill. At that time the cold wind blows from the north. Nature looks dead and gloomy. Of course, many kinds of vegetables then grow in plenty. Life in nature becomes too dull. The poor suffer much from cold.

The spring is called the king of all seasons. Nature wears a beautiful look in this season. Lifeless trees put on new leaves. Various kinds of colorful and fragrant flowers bloom and a gentle breeze blows. It consists of Falgoon and Chaitra. In this season we are saved from biting cold in the winter. It comes with flowers and new leaves. During this season countless varieties of flowers bloom and make the whole atmosphere delightful with their sweet fragrance. It gives new life everywhere in nature. The cuckoo appears with its enchanting melody.

The unique cycle of the six seasons has been taking place in Bangladesh for ages. This great variety of nature is reflected in the minds of the people here. As a result, Bangladesh has been a land of music and rhythms. 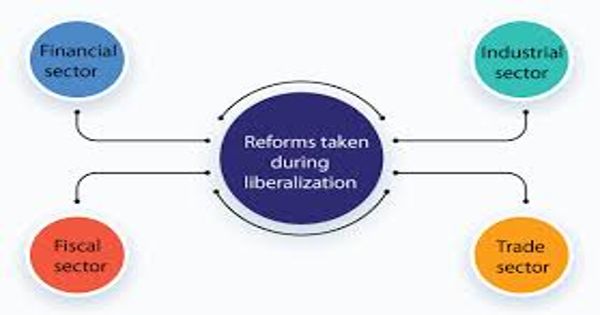 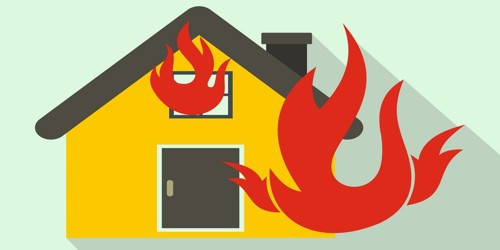 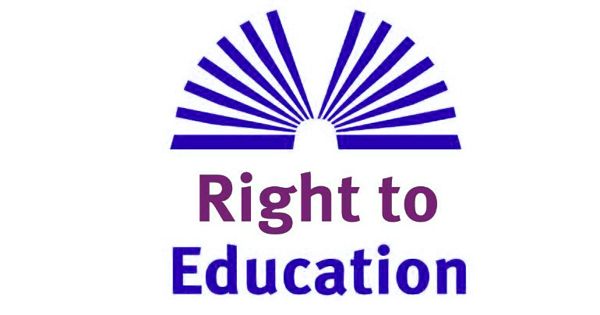 The Right to Education 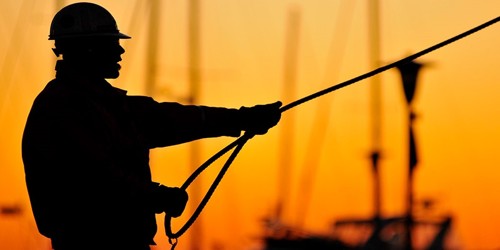 The Life of a Day Laborer