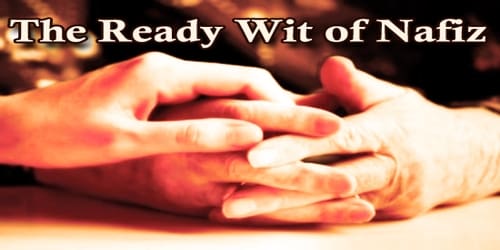 The Ready Wit of Nafiz

One day Nafiz was going to his college in the early morning. On the way, he saw that a middle-aged woman is surrounded by some young men. The men were trying to snatch the handbag of the woman showing arms. Nafiz stopped and thought that it was his duty to rescue the helpless woman from the hands of those miscreants. The woman was trembling in fear. She was speechless. Nafiz saw that the miscreants were four in number. Besides, they were in possession of arms. So Nafiz thought of a plan. He saw that there were a few people on the road. According to his plan, Nafiz started shouting “Police…Help…Police” at the top of his voice.

At this, the muggers were taken aback. They immediately left the lady and ran off in a safe direction. Being panic-stricken, the muggers even left the bag there. Nafiz went to the lady. She was greatly frightened. She was crying. Nafiz asked her about her home. In a trembling voice, she told Nafiz that she lived a few blocks away and requested Nafiz to take her home. Nafiz agreed and took her home. When the lady reached home, she pressed the doorbell. The door was opened by a middle-aged man. The woman told him what had happened. Nafiz was about to leave. But the man called and invited him to come in. The man introduced himself to be the husband of the woman. Nafiz told him that he would be late for college. The man thanked Nafiz very much and requested him to come in the afternoon to have a cup of tea. Nafiz agreed and left for college.