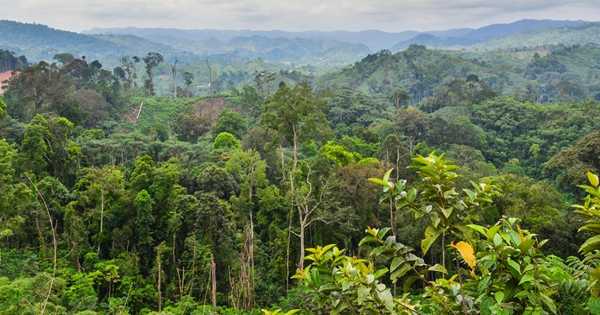 The Congo basin is home to the world’s second-largest rainforest, which has been slowly drying out over the last four decades on 500 million acres. Scientists have been asking: What causes rain in the Congo rainforest, in order to figure out why the dry season is getting longer.

According to a new study published in the AGU journal JGR: Biogeosciences, which publishes research on the interactions between biological, geological, and chemical processes across Earth’s ecosystems, the answer is the rainforest itself. The new study discovered that moisture evaporating from the dense forest canopy, known as evapotranspiration, is the primary source of water vapor in the rainforest during the spring rainy season.

“People generally believe that the onset of the rainy season necessitates moisture transport from the ocean. However, according to this study, the majority of the moisture in the spring rainy season comes from plants “Rong Fu, a climate scientist at the University of California-Los Angeles and study co-author, said

The new findings have implications for land-use changes and sustainable agriculture in the Congo rainforest, where deforestation is a major problem. Recent rapid changes in land use may jeopardize that moisture source, on which local communities rely. After the Amazon, the Congo is the world’s second-largest “terrestrial water center.” Changes to the Congo could influence global hydrology, not only regional water cycling.

The Congo is the world’s second-largest “terrestrial water center,” behind the Amazon. Changes to the Congo could influence global hydrology, not only regional water cycling. The research found moisture leaving the dense forest canopy, or evapotranspiration is the largest source of water vapor in the rainforest during the spring rainy season.

Moisture can enter rainforests in two ways: delivered from the ocean or released by plants via transpiration. Moist air from the ocean can move inland, causing rain to fall. Scientists thought the Congo got a lot of its moisture this way. Plants, on the other hand, move water from the soil up through their roots to the leaves, where it can escape as water vapor or transpire. When an entire jungle is transpiring, the amount of water vapor quickly adds up. In the Congo, the question is how much water transpiration adds.

The researchers used remote sensing techniques to track the isotopic composition of water vapor in the basin throughout the year to find out. Satellites can detect different chemical signatures of moisture from the ocean and moisture from plants.

Fu was especially curious about what controls moisture during the Congo rainforest’s spring rainy season, which has been getting drier since the 1980s. “We were surprised to find that evapotranspiration is even more important in the Congo than it is in the Amazon,” she said.

Their findings revealed that during the early rainy spring, plants accounted for more than 80% of the moisture—about 30% more than in the Amazon. Transpiration, as Fu discovered previously in the Amazon, is significant enough to cause the Congo’s spring rains. During the fall rainy season, moisture from the oceans takes precedence over transpiration. Between the two is the dry season, which relies on wet season moisture stores to keep the air moist. As the dry season lengthens and the rainy season becomes less wet, the dry season may become drier.

While hydrology in the Amazon is well understood, “relatively little work has been done on the Congo compared to the Amazon,” according to Fu. This knowledge gap is caused in part by the Congo’s poor observational coverage, and satellite-based remote sensing techniques can help fill it.

Concerns about changes in the spring rainy season stem in part from land-use changes that have been taking place, largely out of the public eye when compared to the attention given to deforestation in the Amazon. According to the new findings, removing Congo rainforest vegetation is likely to alter the amount of rain that falls in the spring, potentially affecting the well-being of local communities and crops for the rest of the year.

For the time being, predicting the region’s responses to both land use and climate change is extremely difficult. “We need to study this link to predict what the reduction in evapotranspiration might be, and whether rainfall in the Congo will increase or decrease as a result of climate change,” Fu said. Studies like Fu’s will aid in the improvement of climate models and predictions, as well as informing conservation and sustainable agriculture efforts in the Congo Basin.