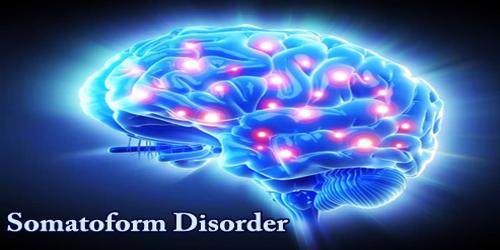 Definition: The Somatoform Disorders, also known as Somatic Symptom Disorders (SSD), formerly known as “Somatization Disorder”, are a group of psychological disorders in which a patient experiences physical symptoms that are inconsistent with or cannot be fully explained by any underlying general medical or neurologic condition. These disorders, as a group, are included in a number of diagnostic schemes of mental illness, including the Diagnostic and Statistical Manual of Mental Disorders. (Before DSM-5 this disorder was split into somatization disorder and undifferentiated somatoform disorder.) Medically unexplained physical symptoms account for as many as 50% of new medical outpatient visits. Physical symptoms or painful complaints of unknown etiology are fairly common in pediatric populations.

In general, somatoform disorder deals with the physical aspects of unknown illnesses, and on the other hand, dissociative disorders deal with the patient’s sense of identity or memory. There are seven different kinds of somatoform disorders, each with their own description, or way to be identified. The major problem with somatoform disorders is that it is very hard to recognize and treat because the illness is well camouflaged to appear like normal illnesses. This would create situations where people are being treated for sicknesses that they do not really have, which is an overuse medical services and resources.

Somatization in children consists of the persistent experience and complaints of somatic distress that cannot be fully explained by a medical diagnosis. They can be represented by a wide spectrum of severity, ranging from mild self-limited symptoms, such as stomachache and headache, to chronic disabling symptoms, such as seizures and paralysis. Somatic symptom disorder is difficult to diagnose and treat. Some advocates of the diagnosis believe this is because proper diagnosis and treatment requires psychiatrists to work with neurologists on patients with this disorder.

Somatoform disorder was first described by Paul Briquet in 1859 and was subsequently known as Briquet’s syndrome. He described patients who had been sickly most of their lives and complained of multiple symptoms from different organ systems. Symptoms persist despite multiple consultations, hospitalizations and investigations.

The exact cause of ‘Somatoform Disorder’ isn’t clear, but any of these factors may play a role: 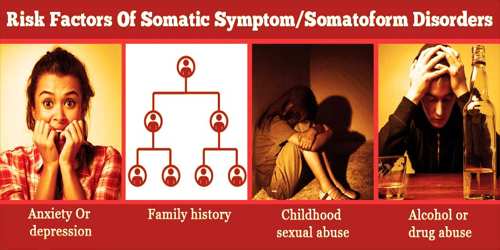 Risk factors for ‘Somatoform Disorder’ include:

Somatoform disorder can be associated with: 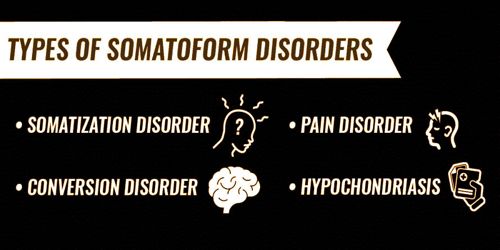 Types and Symptoms of Somatoform Disorder –

Different somatoform disorders are distinguished by thoughts, emotions, and actions related to somatic symptoms. There are seven types of somatoform disorders where individuals present with a multitude of clinically significant symptoms that cannot be explained, including:

Pain Disorder – Somatoform pain disorder is characterized by recurring pain in one or more parts of the body with no known cause. A pain disorder diagnosis is given when pain cannot be accounted for by a medical or other disorder, when pain causes considerable distress and when psychological factors play a significant role in the onset, magnitude and duration of the pain.

Hypochondriasis – Hypochondriasis, formerly known as hypochondriacal neurosis, is where the someone has excessive fear or preoccupation with having a serious illness in spite of medical testing and reassurance.

Symptoms: Somatoform Disorder is a form of mental illness that causes one or more bodily symptoms, including pain. The symptoms may or may not be traceable to a physical cause including general medical conditions, other mental illnesses, or substance abuse. But regardless, they cause excessive and disproportionate levels of distress. The symptoms can involve one or more different organs and body systems, such as: Pain, Neurologic problems, Gastrointestinal complaints, Sexual symptoms. 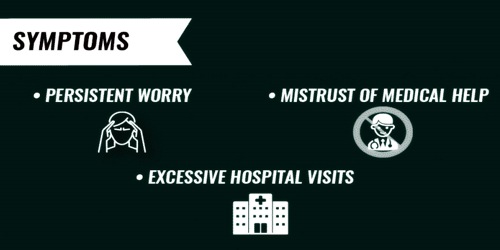 Thoughts, emotions, and behaviors associated with somatoform disorders may consist of the following:

Doctors need to perform many tests to rule out other possible causes before diagnosing somatoform disorders. The diagnosis of somatoform disorders can create a lot of stress and frustration for patients. They may feel unsatisfied if there’s no better physical explanation for their symptoms or if they are told their level of distress about a physical illness is excessive. Stress often leads patients to become more worried about their health, and this creates a vicious cycle that can persist for years.

Consequently, any person suffering from a poorly understood illness can potentially fulfill the criteria for this psychiatric diagnosis, even if they exhibit no psychiatric symptoms in the conventional sense. In 2013–14, there were several widely publicized cases of individuals being involuntarily admitted to psychiatric wards on the basis of this diagnosis alone. This has raised concerns about the consequences of potential misuse of this diagnostic category.

CBT can help in some of the following ways:

Little is known about how to prevent somatic symptom disorder. However, these recommendations may help.

However, most believe that it is better not to give the patients any drugs as treatment, but in some cases, it has been very successful. Alternative treatment such as acupuncture, hydrotherapy, therapeutic massage, meditation, botanical medicine, and homeopathic treatment can help people with pain or somatoform disorders would be able to ease their pain, and soul in some situations.