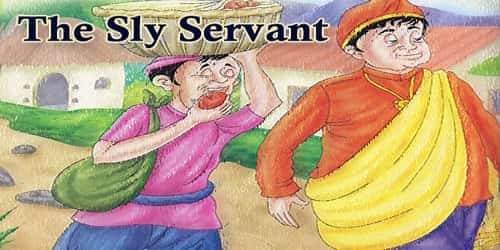 Once upon a time, there lived a rich merchant who had a very cunning servant. One day, the merchant decided to visit his mother. “Pack some food for me and a basket of fruits for my mother,” he instructed his servant. “I have eyes at the back of my head. So, don’t you dare eat any of the fruits?” The sly servant was walking behind the merchant. When he got hungry, he quietly took the fruits out, one by one, showed them to the back of his master’s head and ate them all!

Soon, the merchant discovered that the fruits were gone. “You scoundrel! You ate all the fruits!” he shouted. “But Master, I took permission from you. I showed each fruit to the back of your head before eating! You never objected!” replied the wily servant. Fuming, the merchant sat down to lunch. He cooked fish over a fire and started to eat. He gave one rotten fish to his servant. “Master, don’t fish swim in a shoal?” he asked. “Yes,” the merchant replied. The servant placed his rotten fish on his master’s plate. “You fool!” Look what you did! Now how will I eat this? Yelled his master. And so the servant ate all the fish.

Soon, the merchant grew too tired and hungry to walk any more. “Bring me food from my mother’s house,” he ordered. The servant fetched food from there. While returning, he mixed some banana plant ashes in the food. This was used as a substitute for salt in many places. The food was now too salty to eat. When the merchant took the first mouthful, he instantly knew it was his servant’s work. But he ate it quietly, as he was too hungry for words. “I will take my revenge on you!” he thought. He wondered how to teach a lesson.

Soon, the merchant hit upon an idea. “I will send him to my brother for a sound thrashing!”

And so he wrote a note to his brother asking him to beat the servant black and blue. “Take this to my brother at once,” he instructed.

The servant grew suspicious. On the way, he stopped a teacher and asked him to read out the note. “It instructs the receiver to give a beating to the bearer of the note!” said the teacher.

The servant asked the teacher to write another note instead. He told the brother, “Sir, my Master wishes you to make me your son-in-law at once!” and he showed him the note. The puzzled brother read the note and accepted it. He arranged the servant’s marriage to his daughter the same day.

The next day, the merchant reached there. “Didn’t you get my note?” he demanded. “Yes I did, and I obeyed!” replied his brother. “Then why isn’t he beaten up?” the merchant asked. “But you asked me to get him married to my daughter!” and showed him the note. “Outwitted again!” thought the helpless merchant.