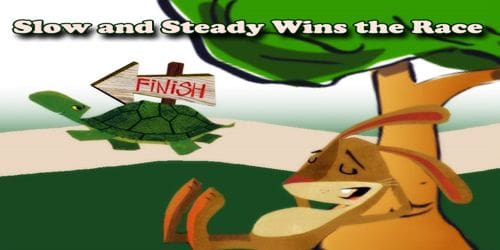 Slow and Steady Wins the Race

Once there was a hare. She was very proud of her speed. One day she was going back to her house. A tortoise was also returning to his house. The tortoise was going without disturbing the hare. Suddenly the hare stopped the tortoise and said, “You slowcoach! I feel pity for your speed.” But the tortoise said with a smile, “Well, let’s run a race.” At this, the hare was much amused. So she said. “Come along; let’s fix a date for the race.” They fixed a date. A fox came to see the race.

The tortoise and the hare came to the starting point. The race began. The hare began to run very fast. She jumped and jumped. She ran a mile in a few minutes. Soon she found the tortoise far behind her. Then she stopped. She said to herself, “What’s the use of going so fast? Perhaps, the tortoise has covered only a few yards by this time. So I can very well have a good sleep before he comes up.” So saying, the hare went to sleep in a bush.

The tortoise, on the Other hand, walked and walked. He did not stop anywhere. In the meantime, the tortoise was about to cross the location of the hare. When he came to the bush, he saw the lazy hare lying fast asleep. He smiled and quietly passed by her. Many hours passed. The hare woke up. She saw that it was already evening. She immediately got on her feet. She began to run very fast. But alas! The tortoise had already gone far. She came in sight of the finishing point. But the tortoise was already crossing the winning post. The hare felt much ashamed. She then said to herself, “It is true that slow and steady wins the race.”