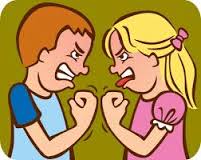 Family denotes a group of people affiliated by a consanguinity, affinity or co-residence. From the perspective of children, the family is a family of orientation the family serves to locate children socially, and plays a major role in their enculturation and socialization. From the point of view of the parent(s), the family is a family of procreation the goal of which is to produce and enculturate and socialize children. Our families give us an identity. They provide us with a moral, social and economic support.

The role of the family

The role of the family in raising the children is one of the most important roles. It is the first factor that influences the behavior of the children in their early childhood. The family is essential to meet a child’s psychological needs, its members must be nurturing, convey mutual respect, provide for intimacy, and engage in bonding and attachment. The family also socializes the child, guiding the child to be members of the society beyond the family. The family conveys religious and cultural beliefs and traditions to the next generation. The family also teaches morals arid values to a child.

A brother or a sister who have both parents in common from those who share only one parent all are known simple as sibling. The study of children has included sibling relationship as important factors in personality formation.

The word ‘Adolescence’ is Latin in origin, derived from the verbs ‘adolescence’, which means ‘to grow into adulthood’. In all societies, adolescence is a time of growing up, of moving from the immaturity of childhood into the maturity of adulthood.

A physiological definition of adolescence has often been proposed by Douvan & Gold (1966) and Jones (1949). In such a definition, adolescence begins when the reproduction organs and secondary sex characteristics (body hair, breasts) begins to change in late childhood; the end of adolescence is associated with the full maturation of reproductive system.

As suggested in most physiological definitions, however it is difficult to determine if adolescence actually begins with hormonal changes that occur at least two years before major body changes are visible or begins when secondary sex characteristics emerge.

Some development theorists have considered adolescence as primarily a biological process, while others have emphasized environmental and cultural influence.

Piaget (1950) and Erikson (1968) are among (hose who believe (iial human beings develop though separate stages, mastering one stage before they go to the next. For instance, Ericson believes that adolescence is a stage that is accompanied by the conflict of identify versus identity confusion. Social learning theorists, on the other hand, believe that there is continuity in human growth and that no clear cut ways of thinking arise at any age level. Children model their behavior on people they observe and thereby come to learn and to internalize the norms of their culture. This process is called socialization.

Adolescence (especially young adolescence) is characterized by heightened emotional tension mainly resulting from surrounding social conditions. This period of life has been variously looked upon as a time of storm and stress, an age of frustration and suffering, a span of intensified conflict and crises of adjustment, a phase of dreams and reveries of romance and love, and an era of alienation from adult, society and culture.

This is the period when an individual searches for self-conceptions that fosters further development, and finally, to the attainment of adult status with its challenging tasks and responsibilities. Adolescents are eager to approach explore and learn about new objects and subjects with increasing complexity of needs, interests and desires. Adolescents although eager to learn arc not in favor of structured routine learning with limits of discipline which is why they (especially young adolescents) complain about school, restrictions, homework, teaching etc. Adolescents who have little interest in education become under achievers play truants or withdraw from school before the legal large.

There is no single definition of Emotional and Social Impairment which is accepted by all. Different development psychologists describe social and emotional impairment in different ways and use their own terminology in their definition. According lo Herbert (1998) “Emotional and behavioral problems refer to a large and heterogeneous collection of disorders ranging from depression, anxiety, inhibition and shyness to non- compliance, destructiveness, stealing and aggressiveness.”

We all have experienced interpersonal problems at some stage in our life. These difficulties usually involve some conflict, which causes discomfort or worst still outright distress and hurt. Interpersonal problems can emerge in their own right as different people clash, or it may be a symptom of other underlying problems such as anxiety or depression.

Interpersonal problems are recurrent difficulties in relating to others, and are a common reason why people seek psychotherapy (Horowitz, Rosenberg, & Bartholomew, 1993).

The eight sectors are

Rationale of the study

In fact parents play a significant role in raring and taking care of their children. An encouraging and cooperative parent is a source of support and can help foster the development of a secure parent-child attachment bond. This attachment bond, in turn, can provide the child with a secure base from which to explore the environment and develop personal and interpersonal competencies. (Bretherton, 1W2). But if a child is not provided consistent, loving care it will suffer for insecure attachment. Children with insecure attachments have learned that the world is not a safe place. They don’t have the experiences they need to feel confident in themselves and trust in others. Children may have trouble with learning, may be aggressive and act out, be excessively clingy, have difficulty making friends, suffer anxiety or depression, or be developmentally delayed. All of these troubles will make serious interpersonal problems when they will be adult. The present study will help us to know the impact of the quality of parental attachment on interpersonal problems.

Interpersonal problem is a very common problem in our country so it would be considered with great priority. But very few empirical investigations are available in Bangladeshi context. To increase theoretical idea about interpersonal problems and related factors with it more research is required in this field.

”Young Adolescents because of the multitude dimensions of adjustments and decision makings and because of their lack of experience are easy preys to social and emotional impairment. Moreover young adolescents, in particular may be at substantial risk when body changes are most pronounced and self- concept is least stable. It is thus essential to be aware and to understand, identify the positive and negative developments of adolescence to ensure effective socialization and provide a positive foundation for a successful transition to adulthood.

Understanding adolescents self has been a great concern to the developmental psychologist. It refers to a person’s attitude and feeling about himself and psychological process which governs behavior and adjustment. This self of the adolescent can be understood by considering how adolescents view themselves.

It is hoped that the findings of present study would be helpful for the young adolescents of Bangladesh to make this crucial period of life less stressful and more industrious.

The reliability of the inventories is discussed in terms of internal consistency, assessed by Cronbach’s alpha coefficient, and the rest-retest consistency of scores over a time period of approximately one week.

Test-Retest reliability coefficient of the original scales were computed based on a sub sample of 105 individuals. The median retest interval was seven days. These correlations were corrected for the variability of scores on the first testing. Corrected test-retest reliabilities for youth aged 11-14 ranged from .84 to.93.

Validity is determined in terms of interrelatedness of the inventories, relatedness to other instruments, and scores obtained by criterion groups and matched samples. One of them is discussed below: Evidence Based on Internal Structure: Overall, inventory scores are significantly correlated with each other within norm groups. Among the inventories, correlations between the BDI-Y, BAI-Y, and BANY-Y are the highest, particularly for youth aged 11-14, which range from .74 to .81.A notably high correlation is between scores on the BDI-Y and the BANY-Y (r = .81) Among males aged 11-14.Correlations between scores on the BSCI-Y and the other inventories were significant, negative and low to moderate, which range from -.26 to -.57.

Description of the Interpersonal problem (11P-64)

To construct the Bangla version of the IIP-64 the 64 – items were translated into Bangla. Then that Bangla version was given to two translators to retranslate it into English. One of the translators was the professor, Department of English, University of Dhaka; and the other one was the professor, Department of English, BrojolalGovt.College, Khulna. Then it was checked by the present researcher and her supervisor for the correctness of translation. After syntheses of the Bangla and English translated version final Bangla version of the scale was prepared.

Scoring of the inventory of interpersonal problem

Each item of eight subscales of the IIP-64 has five alternative responses – not at all, a little bit, moderately, quite a bit, extremely and the responses are scored as 0,1,2,3, and 4 respectively. From these alternative answers the participants put a (V) mark on one that was most suitable for him or her. Raw subscale scores are obtained by calculating the sum of the eight item responses for each of the eight scales and the total score of IIP 6-1 can be obtained by adding all eight subscale’s scores. The Total T score indicates the person’s self-report of overall interpersonal difficulty across all problem areas. If the Total T score is more than 2 standard deviations above the mean (T=70), the person’s distress is very high relative to the general population. Scores on the eight domain scales will then identify specific areas of interpersonal difficulty relative to (lie general populations.

Data of the present study were collected following standard procedure. Necessary rapport was established before administering the questionnaires. For administering instruments, each subject was given the following general instruction “This questionnaire asks about your feelings your answer will be completely anonymous and confidential and will be used for research purpose. Try to answer all questions as honestly as possible. Give each question a moment thought and then answer it. Please answer each question independently.

After administration “BECK Youth Inventories of emotional and social impairment” to the adolescents. The mother will also requested to fill up the questionnaire for interpersonal problems. 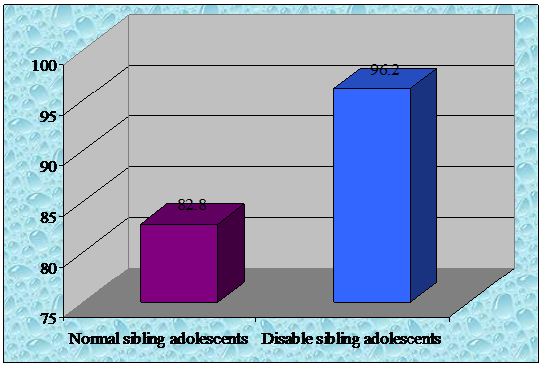 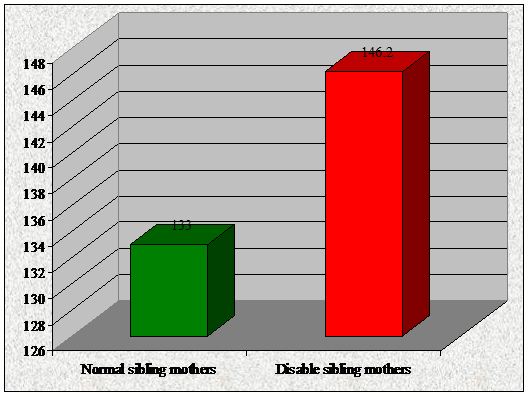 Adolescence be presents a period of crisis. It is the biological transition that every adolescent goes through by virtue of being an adolescent. Psychologically it is the marginal situation in which new adjustment have to be made, psycho-socially it is the transition period from dependent childhood to self sufficient adulthood.

Parenting is a very difficult and stressful job and through fathers make significant contribution in parenting, mothers have the key responsibilities in caring for her children. He role is not only care gives but also teacher, education and counselor. An encouraging and co-operative mother is a source of support and can help foster the healthy development of her children. If they have any problem it might have negative impact on their children. When one family member like her is not normal than it is too stressful for the mother. So it is one of the reason that could be increased mother interpersonal problems.

However although the present study tried to maintain a sound methodology and analysis of data, nevertheless it is not free from certain limitations. Following can be said to be the major limitations of the study.

But in spite of the limitation, the findings of the present study may have important implications for the psychologists, social workers, administrations and other professionals working will adolescents and their mothers.