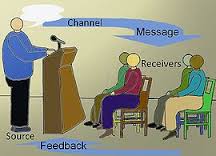 This communication for organizations takes place both within the organization as well as with other outside stakeholders outside.Information is of no use unless and until it is carefully put into words and conveyed to others. Encoding plays a very important role because it initiates the process of communication by converting the thought into content. When the information reaches the recipient his prime responsibility is to understand what the speaker intends to convey. Unless and until the second party is able to understand or decode the information what the sender wants to communicate, the message is actually of no use. Thus encoding and decoding are two most important factors of an effective communication without which information can never flow between two individuals. Schramm’s model also revolves around the above principle. According to the Schramm’s model, coding and decoding are the two essential processes of an effective communication.

Schramm on the other hand, emphasized in 1954 that both the sender and the receiver take turns playing the role of the encoder and the decoder when it comes to communication.

The following diagram illustrates the model proposed by Schramm

The diagram above clearly illustrates how communication takes place, and also helps one to determine what could go wrong.In Shannon’s model, the information source typically refers to a person, who then sends a message with the use of a transmitter.

This transmitter could be any instrument today, from phones to computers and other devices. The signals that are sent and received can be vary depending on the method of communication.

The box at the bottom called NOISE refers to any signals that may interfere with the message being carried. This again would depend on the method of communication.The receiver is the instrument or the person on the other side that receives the. This model is the simplest models to understand the workings of the communication process.

Promotion from salesperson to sales manager

Define and Discuss on Brand Management