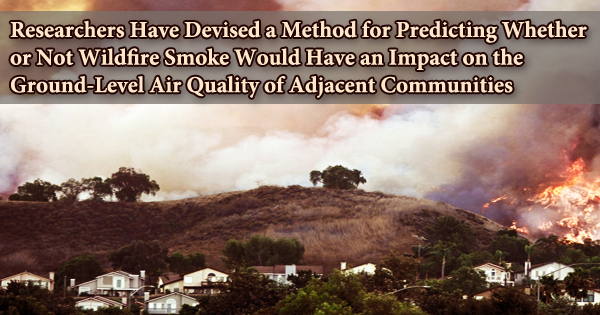 Last month, New York City and other east coast towns saw some of the world’s worst air pollution. Wildfires raged throughout Canada, California, and Oregon, sending smoke hundreds of miles away. Imagine what that dense smoke may do to our lungs if it could spread from one end of the country to the other.

When wood and other organic materials burn, smoke is formed from a complicated combination of gases and tiny particles. The tiny particles in smoke are the most dangerous to one’s health. These tiny particles have the ability to infiltrate our lungs deeply. They can cause everything from burning eyes and a runny nose to exacerbating existing heart and lung illnesses. Particle pollution has also been linked to an increased risk of mortality.

Scientists can precisely observe how far and broad wildfire smoke spreads throughout a region using satellites, but they have a harder time forecasting whether the plumes would be high in height or down to the ground, where they will have a serious impact on people’s health.

However, a team of researchers led by Heather A. Holmes, associate professor of chemical engineering at the University of Utah, has devised a method for determining whether wildfire smoke would stay high in the sky or fall to the ground by integrating a meteorological model with NASA satellite data. As a result, it will be easier to anticipate whether or not smoke from a nearby wildfire will reach people on the ground.

“Our hope is this technique gets incorporated into smoke forecasting as a way to improve warning systems related to smoke exposure,” says Holmes, whose research is focused on the physics and chemistry of air pollution.

When we breath wildfire smoke, extremely tiny particles go deep into our lungs. Irritation and inflammation can result from these particles, which can continue until the air quality improves. Most symptoms are relatively mild, and can be managed without medical attention:

The results of Holmes’ research were just published in the Journal of Geophysical Research: Atmospheres. S. Marcela Lora-Salazar, a former graduate student of Holmes’s who is now an assistant professor at the University of Oklahoma’s School of Meteorology, was the initial author.

Even by studying satellite data of the smoke’s distribution, experts couldn’t correctly forecast if wildfire smoke would reach the lower altitudes of a region where it may impact inhabitants. For example, scientists couldn’t explain why Fresno, Calif., had low levels of pollution despite satellite pictures showing smoke enveloping the city during the 2013 Yosemite Rim Fire, one of California’s biggest wildfires that burnt more than 257,000 acres. The smoke was really in the top level of the troposphere (the lowest area of the atmosphere), where it was separated from the Earth’s surface, thanks to the complex winds caused by the mountains.

As a result, Holmes and Loria-Salazar worked with NASA scientists to study satellite data from the Yosemite Rim Fire, as well as ground observation data, to create a strategy for better understanding vertical smoke patterns. They looked at data from the satellite termed “plume injection height,” an estimate of the top layer of pollution, and vertical meteorology at the time of the fire. As a result, they devised a “smoke height/boundary ratio,” a calculation of how much smoke reaches the Earth’s surface. According to Holmes, knowing where the smoke is vertically in the sky might assist scientists to predict where the smoke will be downwind.

“There’s a lot of uncertainties in understanding the vertical mixing in the atmosphere, and that really drives where the smoke will end up,” she says.

With this new knowledge, Holmes believes meteorologists, climatologists, and air quality specialists may be able to forecast whether smoke from a wildfire would harm the health of inhabitants in a neighboring city for up to two or three days.

“If you can forecast this, you can make more informed decisions on whether to have school closures, or you can give alerts on when to not go outside to exercise,” she says. “You can give people information to protect themselves better.”

According to the US Environmental Protection Agency, wood smoke creates tiny particulate matter that can infiltrate the lungs and harm people’s health, especially those with lung and heart problems, diabetes, older individuals, younger children, and pregnant women. Wildfire smoke not only affects individuals when they are outside, but it also permeates into houses and impacts interior air quality, according to research.