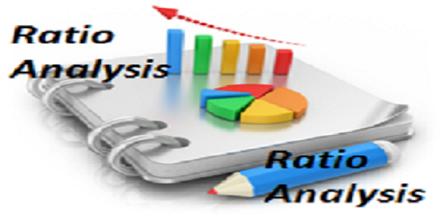 SCB has a history of more than 150 years. The name Standard Chartered has came from two distinct original banks. The portions “STANDARD” and “Chartered” stems from the “Chartered Bank” of India, Australia and China; the rest came from the “Standard Bank” of British South Africa.

Chartered bank was established in 1853 by a Royal Charter granted by Queen Victoria of England. The main person behind the Chartered Bank was a Scot, James Wilson. He kind of foresaw the advantages of financing the growing trade links with the areas in the East, where no other financial institution was present that time widely.

Vision of SCB is to focus on getting the basics of banking right making sure that they’re financially stable with strong governance, so that they can create value for their shareholders and society in the long run. So, their brand promise is to be the right partner.

Mission of SCB is to run the operations well; standing by their clients and investing in local communities by providing high quality products and services backed by latest technology and a team of highly motivated personnel to deliver excellence in banking , so they can be a powerful force for good.

SCB’s objective and brand promise is “Here for good”, and is the essence of who they actually are. It’s about sticking by their clients through good times and bad, and always trying to do the right thing.

Standard Chartered Bank’s brand promise is “Here for good”, that underpins everything they do.

As SCB strives to be the world’s best international bank, it’s important to them that they conduct their business to the highest standards and are guided by their core values. To do so they act in an open, innovative and collaborative manner to advance the best interests of our clients. SCB has five stated core values:

OBJECTIVES OF THE REPORT:

To provide an overview of Standard Chartered Bank

As I have been working there for three months, it was some extent to hassle free to collect the financial information from the MIS and Finance department.

There are two types data have been used here to conduct the analysis:

The primary sources are:

A tool used by individuals to conduct a quantitative analysis of information in a company’s financial statements. Ratios are calculated from current year numbers and are then compared to previous years, other companies, the industry, or even the economy to judge the performance of the company. Ratio analysis is predominately used by proponents of fundamental analysis. (Investopedia)

To do an analysis, the following ratios and values have been calculated: 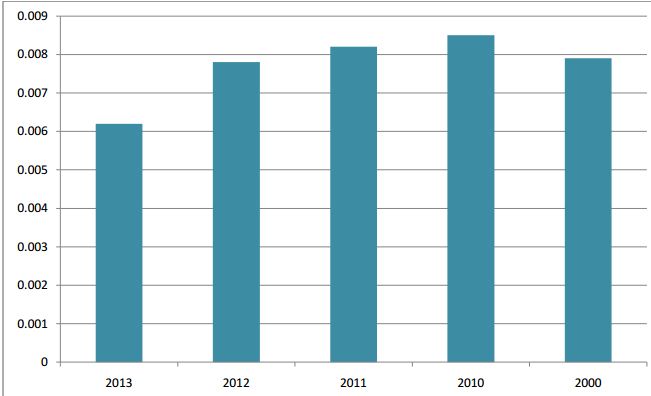 It shows how capable the management of the bank has been in converting the institution’s assets into net earnings, as it calculates how much a bank earns using 1 unit of assets. Here the return on asset has a fluctuating trend. It varies between .0062 to 0.0085 between the years of 2013 to 2009 and being its highest in 2010. 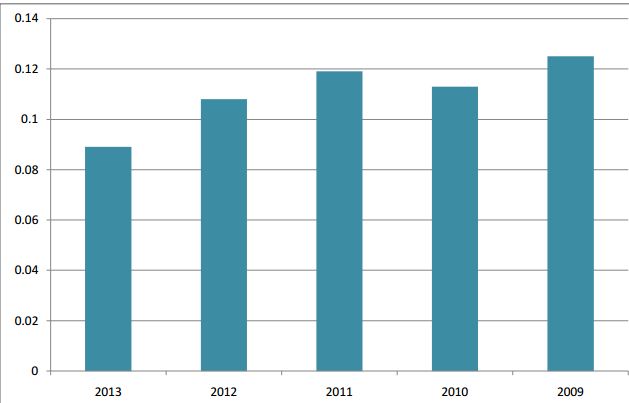 The trend shows that SCB had a fair return on equity ratio in 2009 to 2011 but it was not enough as it started to fall from 2012 and it is least at 2013 with 8.9% where as it was 12.5% in 2009. The reason could be the shortage of profits and as a result net income had gone down. Another reason could be the effect on ROE due to the new instruction of Bangladesh Bank to limit the Credit Deposit Ratio within 85%. So the banks have to take deposit in higher competitive rates. 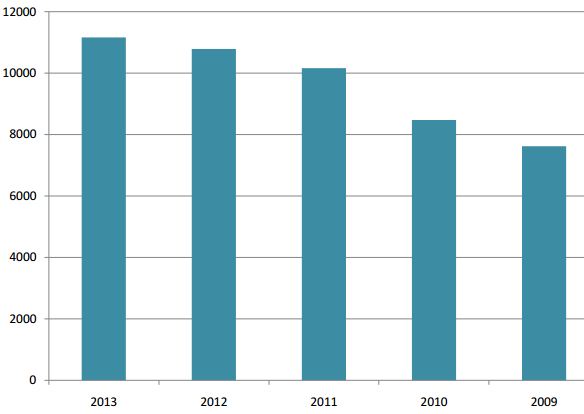 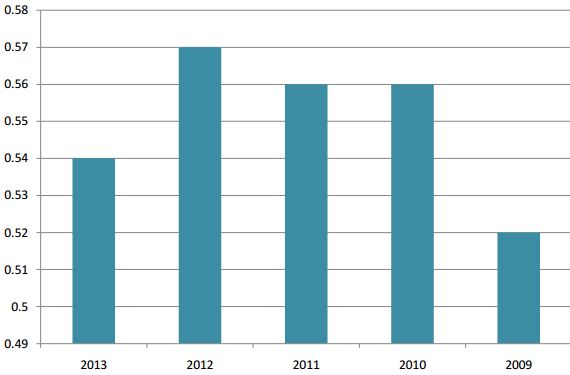 Cost to income ratio is only affected by banks cost but also by the variations in income. For any given level of cost relative to a bank’s assets, a reduction in income will cause cost to ratio to increase. Here we can see that the least cost to ratio of SCB was in 2009 and then it increased during 2010 to 2012 and in 2012 it was highest in last five years then again it reduced to a great extent in 2013. It might be a reason of ineffectuality in generating income by the bank or it could be a reflection of change in the competitive conditions reducing the margins available to banks. But this downturn can also be defined from the insight of economic downturn during 2010-2012 that has reduced the opportunities of banks to undertake profitable business from which to earn interest and fees. But it again started to go downwards in 2013 which is good. 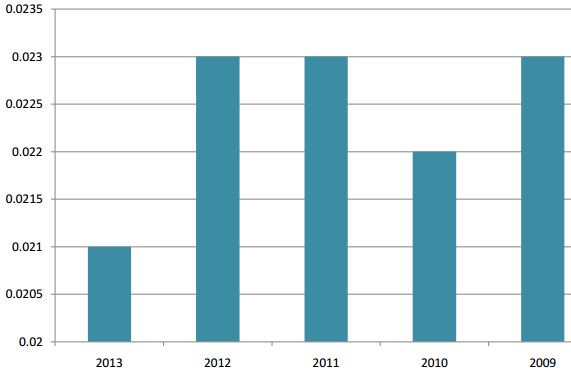 The net interest margin is used to track the profitability of bank’s investing and lending activities over a time period. SCB’s net interest margin declined from 2.30% in 2009 to 2.10% in 2013. Also the yields on its assets that generate interest income declined from 3.9% to 3.4% over this period, it increased its reliance on low-cost deposits and short-term debt, and reduced its use of higher-cost long-term debt, lowering its funding costs more than the interest income on its loans and investments. 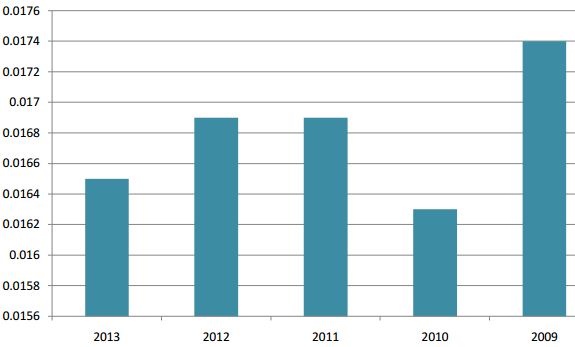 Net interest income as % of TRGA shows how a bank’s net interest income is increasing by utilizing its revenue generating assets. This particular ratio also shows a fall on the 2010 than again it rose in 2011 and became stable in 2012 as well but there is a slight fall in 2013 from 1.69% to 1.65% rate which happened probably because of the slow pace in the economic growth of the year. 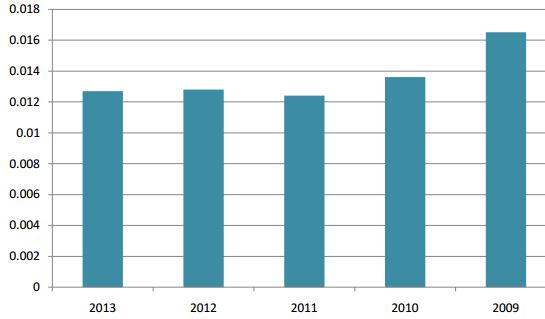 Net non interest income as % of TRGA shows here the fluctuating trend over 5 years. The highest amount of NNII as % of TRGA is in the year of 2009 which explains that SCB’s main earning revenue sources were non operating income on that particular year, which has both positive and negative sides, because non operating income is not the main source of income of a company. But from the year of 2010 to 2013 the trend has become somewhat stable between 1.36% to 1.27%.

In Standard Chartered Bank, my main specific task was related to reporting foreign direct investment (FDI) returns and related rationalized input template (RIT) for Bangladesh Bank. For this task at first I had to check client’s financial statements, relevant encashment papers & documents that have been attached with the company’s FI-1 form (A Foreign Investment related form of client’s financial information). It was also important to check that those papers were signed by any authorized person of the client’s company or not. At the same time my task was to find out the similarities between given financial statements & documents information with the FI-1 form’s information that has been given by the client’s company.

For the purpose of RIT input, after getting proper financial information from the client I had put that information in rationalized input template (which is a standardized non-executable file type used by computer designed file as a pre-formatted example on which to base other files.)

On the other hand, client sometimes provides misleading information so after checking the template report, to ask for clarification and to ask to put down the information in right way even if required I had to contact with the clients.

Another task for me was to make a full copy of client’s submitted papers like FI-1 form, financial statements, company documents, encashment papers etc for both Standard Chartered Bank and Bangladesh Bank. Because for the purpose of the bank, the main copy of the clients papers is required to have in Standard Chartered Bank as a proved file. And the photocopy files are required submitting in Bangladesh Bank for further checking. So I had to make copies of the reports.

Apart from working in Project and MIS division I had also worked with the investigation team; there my tasks was;

It was very good experience working in Standard Chartered Bank. The supervisors, seniors and colleagues are very helpful and supportive every time I wanted to learn something new. While working there I have noticed some critical aspects of their work, which are:

LIMITATIONS OF MY WORK:

By observing and analyzing the overall performance and profitability of Standard Chartered Bank Limited, it can be said that net interest income shows an increasing trend over the five years, which is good for the bank and shows smooth operation of the investments and that the expenses are controlled.

A decreasing ROA indicates less profitability. As ROA is derived from net income and assets, so to improve the return on assets, they can increase net Income without acquiring new assets or improve the effectiveness of existing assets. As the more SCB generates in fees, the more it may concentrate on activities that carry high fixed costs. The degree to which SCB is able to leverage its fixed costs also affects its efficiency ratio; that is, the more scalable it would be, the more efficient it would become. .

In year after year they are trying to improve themselves by establishing a sound capital base. They are trying to make their products and services more lucrative to their customers. And they are rewarding their shareholder’s by enhancing their wealth and attracting more investors by their bank performance.

They follow a front-end load maturity strategy where more than 80% of the investments are short and medium term investments which say that SCB prefers higher liquidity to higher profitability. But that is something that they might face trouble with as shown by the analysis of liquidity indicators. The Cash Position Indicator shows fluctuation in the graph and in 2011, 2012 and 2013; it is gradually decreasing which means the liquidity position of the bank is unstable over the years. This problem can be solved by finding out ways to lower the costs of overhead like advertising, professional costs and rent. However, since the bank is well capitalized with sound investments, this after all might not be a major problem for a bank that operates for 150 years with excellence and expertise.