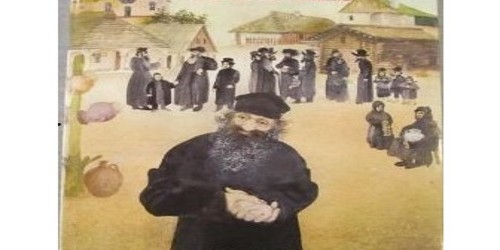 The Rabbi’s Rubles (A Jewish Folktale)

Once upon a time, in a tiny Russian village, there lived a poor cobbler whose name was Abraham. He was so poor, in fact, that his cobbler’s shop was nearly empty, for he could not afford to buy material to make new shoes.

He lived on the few coins he earned repairing soles and toes, and he spent much of his days and nights fretting about money. Each night the cobbler and his wife, Rachel, sat at their tiny table, talking about how they would survive. On the Sabbath, and on the holidays, the cobbler attended synagogue. He often prayed that his future would bring plenty.

One day, near Hanukkah, the cobbler went to the synagogue to hear the rabbi’s sermon, but as he listened, he grew more and more upset. “God created all men equal,” the rabbi said.

The cobbler could not contain his confusion. When he looked around, he did not believe the rabbi’s words. He saw the wealthy baker, the rich jewel merchant, the well-to-do tailor. “Surely I am not the equal of the baker, the jeweler, and the tailor,” he said to himself.

“Go ask the rabbi to explain what he means,” Rachel suggested when Abraham told her of the rabbi’s sermon. And that’s precisely what the cobbler did.

He sat in the rabbi’s study and rubbed his cold hands together. “How can you say we are equal?” the cobbler asked. “I wear rags, and I have barely enough money to purchase firewood. My wife and I eat soup every night, while the jeweler and the baker and the tailor live in fine homes and eat chicken every Sabbath. Surely we are not equal.”

The rabbi listened closely, nodding his head, rubbing his beard. “You see,” he said at last, “those who are poor in this world will be rich in the next, while those who are rich in this life will be poor in the hereafter. It is in this way that God makes sure we all are equal. God is just, Abraham.”

The cobbler could not contain his joy when he heard this. He ran home and shared the news with Rachel, and that night he dreamed of what he would do with his wealth in the next world. He would never fear the cold; he would never go hungry; he would wear fine shoes, and every Sabbath he would eat a juicy chicken dinner. Oh, it would be a grand life.

In the morning, the cobbler’s eyes were gleaming with joy. Rachel shook her head and laughed. “Abraham,” she said, clucking her tongue, “you are a fool. The rabbi is a fool, too, if he thinks you will ever be rich.”

“I’ll prove it to you,” Abraham said, and he left at once to visit the rabbi again.

When they were seated in the rabbi’s study, Abraham said, “My wife does not believe that I will be rich in the next world,” he said.

“Abraham,” the rabbi said solemnly, “I always speak the truth.”

“Then it is true that those who are poor in this world will be rich in the next?” Abraham asked.

“Of course,” the rabbi said emphatically.

“You mean to say that I, Abraham, a poor cobbler who cannot afford to buy material to make new shoes, will have plenty of money in the next world to make all the shoes I want?”

The rabbi nodded once again, and without saying another word, he opened a large wooden box and counted out 100 silver rubles. One by one he placed the coins on the table, right in front of Abraham’s bulging eyes. The poor cobbler could not believe his good fortune.

Abraham reached to take the coins, but before he could, the rabbi placed his hand on Abraham’s. “One question, my son,” the rabbi said. “What do you plan to do with these rubles?”

“I’ll buy material,” Abraham said. “I’ll buy the finest leather and the softest cloth, and I will make shoes. I shall fill my store with beautiful shoes.”

The rabbi again nodded and rubbed his beard. “And will you sell these shoes?” he asked.

“Naturally,” said Abraham. “Everyone will want a pair of Abe’s special shoes.”

The rabbi leaned across his desk and asked, “And will you be rich?”

Abraham nodded. “I’ll earn lots of money, and my troubles will end.”

The rabbi shook his head and reached for his coins. “I’m afraid, in that case, I cannot give you 100 rubles. If you are rich over here, you will be poor in the next life, and you will not be able to repay me.”

With that, the rabbi returned his rubles to the box. Abraham sadly stood and shook the rabbi’s hand. “Thank you, rabbi, for answering a humble cobbler’s questions,” he said.