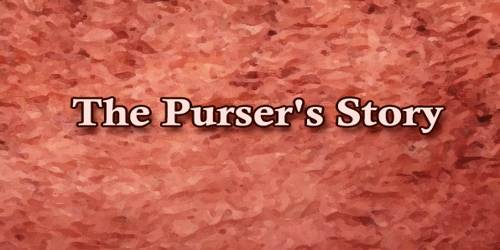 Act as we may, thou clearest to thine own”

I don’t know that I should tell this story.

When the purser related it to me I know it was his intention to write it out for a magazine. In fact he had written it, and I understand that a noted American magazine had offered to publish it, but I have watched that magazine for over three years and I have not yet seen the purser’s story in it. I am sorry that I did not write the story at the time; then perhaps I should have caught the exquisite peculiarities of the purser’s way of telling it. I find myself gradually forgetting the story and I write it now in case I shall forget it, and then be harassed all through after life by the remembrance of the forgetting.

There is no position more painful and tormenting than the consciousness of having had something worth the telling, which, in spite of all mental effort, just eludes the memory. It hovers nebulously beyond the outstretched finger-ends of recollection, and, like the fish that gets off the hook, becomes more and more important as the years fade.

Perhaps, when you read this story, you will say there is nothing in it after all. Well, that will be my fault, then, and I can only regret I did not write down the story when it was told to me, for as I sat in the purser’s room that day it seemed to me I had never heard anything more graphic.

The purser’s room was well forward on the Atlantic steamship. From one of the little red-curtained windows you could look down to where the steerage passengers were gathered on the deck. When the bow of the great vessel plunged down into the big Atlantic waves, the smother of foam that shot upwards would be borne along with the wind, and spatter like rain against the purser’s window. Something about this intermittent patter on the pane reminded the purser of the story, and so he told it to me.

There were a great many steerage passengers coming on at Queenstown, he said, and there was quite a hurry getting them aboard. Two officers stood at each side of the gangway and took the tickets as the people crowded forward. They generally had their tickets in their hands and there was usually no trouble. I stood there and watched them coming aboard. Suddenly there was a fuss and a jam. “What is it?” I asked the officer.

“Two girls, sir, say they have lost their tickets.”

I took the girls aside and the stream of humanity poured in. One was about fourteen and the other, perhaps, eight years old. The little one had a firm grip of the elder’s hand and she was crying. The larger girl looked me straight in the eye as I questioned her.

“Do you think you have them about you or in your luggage?”

“Is this your sister?”

“Are your parents aboard?”

“Are you all alone?”

“You can’t go without your tickets.”

The younger one began to cry the more, and the elder answered, “Mabbe we can foind thim, sur.”

They were bright-looking, intelligent children, and the larger girl gave me such quick, straightforward answers, and it seemed so impossible that children so young should attempt to cross the ocean without tickets that I concluded to let them come, and resolved to get at the truth on the way over.

Next day I told the deck steward to bring the children to my room.

They came in just as I saw them the day before, the elder with a tight grip on the hand of the younger, whose eyes I never caught sight of. She kept them resolutely on the floor, while the other looked straight at me with her big, blue eyes.

“Well, have you found your tickets?”

“What is your name?”

“Where did you live?”

“Where did you get your tickets?”

Now, I knew Kildormey as well as I know this ship, and I knew O’Grady was our agent there. I would have given a good deal at that moment for a few words with him. But I knew of no Mulligans in Kildormey, although, of course, there might be. I was born myself only a few miles from the place. Now, thinks I to myself, if these two children can baffle a purser who has been twenty years on the Atlantic when they say they came from his own town almost, by the powers they deserve their passage over the ocean. I had often seen grown people try to cheat their way across, and I may say none of them succeeded on my ships.

“Where’s your father and mother?”

“Who was your father?”

“Where did he draw his pension?”

“Where did you get the money to buy your tickets?”

“What neighbors? Name them.”

She unhesitatingly named a number, many of whom I knew; and as that had frequently been done before, I saw no reason to doubt the girl’s word.

The little one held on to her sister’s hand and cried bitterly.

When the other was gone, I drew the child towards me and questioned her, but could not get a word in reply.

For the next day or two I was bothered somewhat by a big Irishman named O’Donnell, who was a fire-brand among the steerage passengers. He would harangue them at all hours on the wrongs of Ireland, and the desirability of blowing England out of the water; and as we had many English and German passengers, as well as many peaceable Irishmen, who complained of the constant ructions O’Donnell was kicking up, I was forced to ask him to keep quiet. He became very abusive one day and tried to strike me. I had him locked up until he came to his senses.

While I was in my room, after this little excitement, Mrs. O’Donnell came to me and pleaded for her rascally husband. I had noticed her before. She was a poor, weak, broken-hearted woman whom her husband made a slave of, and I have no doubt beat her when he had the chance. She was evidently mortally afraid of him, and a look from him seemed enough to take the life out of her. He was a worse tyrant, in his own small way, than England had ever been.

“Well, Mrs. O’Donnell,” I said, “I’ll let your husband go, but he will have to keep a civil tongue in his head and keep his hands off people. I’ve seen men, for less, put in irons during a voyage and handed over to the authorities when they landed. And now I want you to do me a favor. There are two children on board without tickets. I don’t believe they ever had tickets, and I want to find out. You’re a kind-hearted woman, Mrs. O’Donnell, and perhaps the children will answer you.” I had the two called in, and they came hand in hand as usual. The elder looked at me as if she couldn’t take her eyes off my face.

“Look at this woman,” I said to her; “she wants to speak to you. Ask her some questions about herself,” I whispered to Mrs. O’Donnell.

“Acushla,” said Mrs. O’Donnell with infinite tenderness, taking the disengaged hand of the elder girl. “Tell me, darlint, where yees are from.”

I suppose I had spoken rather harshly to them before, although I had not intended to do so, but however, that may be, at the first words of kindness from the lips of their countrywoman both girls broke down and cried as if their hearts would break. The poor woman drew them towards her, and, stroking the fair hair of the elder girl, tried to comfort her while the tears streamed down her own cheeks. “Hush, acushla; hush, darlints, shure the gentlemen’s not going to be hard wid two poor children going to a strange country.”

Of course, it would never do to admit that the company could carry emigrants free through sympathy, and I must have appeared rather hard-hearted when I told Mrs. O’Donnell that I would have to take them back with me to Cork. I sent the children away and then arranged with Mrs. O’Donnell to see after them during the voyage, to which she agreed if her husband would let her. I could get nothing from the girl except that she had lost her ticket; and when we sighted New York, I took them through the steerage and asked the passengers if anyone would assume charge of the children and pay their passage. No one would do so.

“Then,” I said, “these children will go back with me to Cork; and if I find they never bought tickets, they will have to go to jail.”

There were groans and hisses at that, and I gave the children in charge of the cabin stewardess, with orders to see that they did not leave the ship. I was at last convinced that they had no friends among the steerage passengers. I intended to take them ashore myself before we sailed; and I knew of good friends in New York who would see to the little waifs, although I did not propose that any of the emigrants should know that an old bachelor purser was fool enough to pay for the passage of a couple of unknown Irish children.

We landed our cabin passengers, and the tender came alongside to take the steerage passengers to Castle Garden. I got the stewardess to bring out the children, and the two stood and watched everyone get aboard the tender.

Just as the tender moved away, there was a wild shriek among the crowded passengers, and Mrs. O’Donnell flung her arms above her head and cried in the most heart-rending tone I ever heard “Oh, my babies, my babies.”

“Kape quiet, ye divil,” hissed O’Donnell, grasping her by the arm. The terrible ten days’ strain had been broken at last, and the poor woman sank in a heap at his feet.

“Bring back that boat,” I shouted, and the tender came back.

“Bring that man aboard.”

They soon brought him back, and I gave his wife over to the care of the stewardess. She speedily rallied and hugged and kissed her children as if she would never part with them.

“So, O’Donnell, these are your children?”

“Don’t dare too much,” I said, “or I’ll show you what can be done in a free country. Now, if I let the children go, will you send their passage money to the company when you get it?”

“I will,” he answered, although I knew he lied.

“Well,” I said, “for Mrs. O’Donnell’s sake, I’ll let them go; and I must congratulate any free country that gets a citizen like you.”

Of course, I never heard from O’Donnell again.