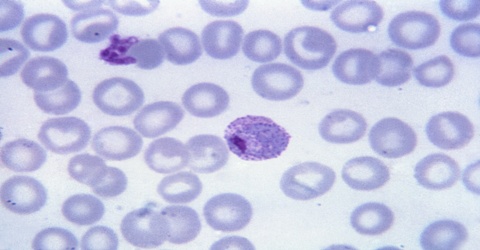 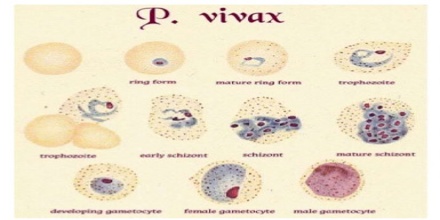 Plasmodium vivax is a protozoal parasite and a human pathogen. The most frequent and widely distributed cause of recurring (Benign tertian) malaria, P. vivax is one of the six species of malaria parasites that commonly infect humans. It is less virulent than Plasmodium falciparum, the deadliest of the six, but vivax malaria can lead to severe disease and death due to splenomegaly a pathologically enlarged spleen. It afflicted as many as eight U.S. presidents—including George Washington and Abraham Lincoln—and may have helped kill Genghis Khan. P. vivax is carried by the female Anopheles mosquito, since it is only the female of the species that bite.

P. vivax was found mainly in the United States, Latin America, and in some parts of Africa. More recently it became a plague of low- and middle-income countries, except those in sub-Saharan Africa, where the P. vivax map has a conspicuous hole. Overall it accounts for 65% of malaria cases in Asia and South America. 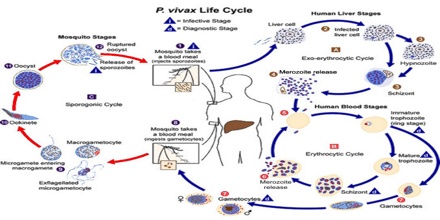 Plasmodium vivax is not the most lethal of the human malaria parasites, it is the most common. While it shares a similar life cycle with the other human malaria parasites, P. vivax has several unique features of its life cycle that complicate diagnosis and treatment. The infection of Plasmodium vivax takes place in human when an infected female anopheles mosquito sucks blood from a healthy person. During feeding, the mosquito injects saliva to prevent blood clotting (along with sporozoites), thousands of sporozoites are inoculated into human blood; within a half-hour the sporozoites reach the liver. There they enter hepatic cells, transform into the tropozoite form and feed on hepatic cells, and reproduce asexually. This process gives rise to thousands of merozoites (plasmodium daughter cells) in the circulatory system and the liver. 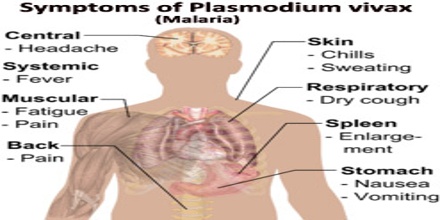 Pathogenesis results from rupture of infected red blood cells, leading to fever. Infected red blood cells may also stick to each other and to walls of capillaries. Vessels plug up and deprive tissues of oxygen. Infection may also cause the spleen to enlarge. The parasite can go dormant in the liver for days to years, causing no symptoms and remaining undetectable in blood tests. They form what are called hypnozoites the name derives from “sleeping organisms”, a small form that nestles inside an individual liver cell. The hypnozoites allow the parasite to survive in more temperate zones, where mosquitoes bite only part of the year.

A single infectious bite can trigger six or more relapses a year, leaving sufferers more vulnerable to other diseases. Other infectious diseases, including falciparum malaria, appear to trigger relapses. P. vivax and P. ovale that has been sitting in EDTA for more than 30 minutes before the blood film is made will look very similar in appearance to P. malariae, which is an important reason to warn the laboratory immediately when the blood sample is drawn so they can process the sample as soon as it arrives. Blood films are preferably made within 30 minutes of the blood draw and must certainly be made within an hour of the blood being drawn. Diagnosis can be done with the strip fast test of antibodies.

The goals of antimalarial treatment in P. vivax are to reduce the immediate risk to the host, eradicate peripheral asexual parasitemia, prevent the recurrent infection, and interrupt the cycle of transmission. The ability of P. vivax to form dormant liver stages (hypnozoites) capable of causing relapsing infections weeks to months after the initial blood-stage infection, provides a major challenge to the complete eradication of parasites from the body. Since no single drug achieves all of these aims, a combination of antimalarials is required targeting a variety of specific key elements of the parasite life cycle.

When chloroquine resistance is common or when chloroquine is contraindicated, then artesunate is the drug of choice, except in the U.S., where it is not approved for use. Where an artemisinin-based combination therapy has been adopted as the first-line treatment for P. falciparum malaria, it may also be used for P. vivax malaria in combination with primaquine for radical cure. An exception is artesunate plus sulfadoxine-pyrimethamine (AS+SP), which is not effective against P. vivax in many places. Mefloquine is a good alternative and in some countries is more readily available. Atovaquone-proguanil is an effective alternative in patients unable to tolerate chloroquine. Quinine may be used to treat vivax malaria but is associated with inferior outcomes.

32–100% of patients will relapse following successful treatment of P. vivax infection if a radical cure (eradication of liver stages) is not given.