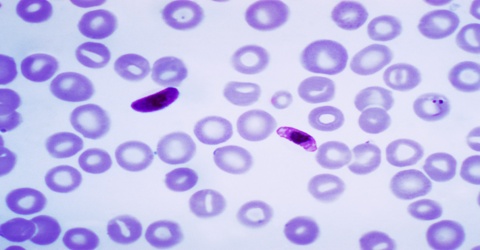 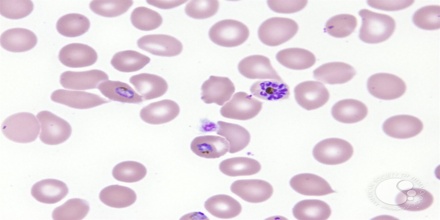 Plasmodium falciparum is a protozoan parasite that causes an infectious disease known as malaria. P. falciparum is the most severe strain of the malaria species correlated with almost every malarial death. Malaria infects over 200 million people annually, mostly in poor tropical and subtropical countries of Africa. It is the deadliest parasitic disease killing over one million people each year. 90 % of the deaths occur south of the Sahara desert and most are under five-year-old children. In addition to Africa, malaria occurs in South and Southeast Asia, Central and South America, the Caribbean and the Middle East. Even within tropical and subtropical areas, malaria does not usually occur at high altitudes (over 1500 meters), during colder seasons, in countries of successful malaria programs or in deserts.

The 2015 World Health Organization report found 214 million cases of malaria worldwide. This resulted in an estimated 438,000 deaths. Rates of infection decreased from 2000 to 2015 by 37%, but increased from 2014’s 198 million cases. In sub-Saharan Africa, over 75% of cases were due to P. falciparum, whereas in most other malarial countries, other, less virulent plasmodial species predominate. Almost every malarial death is caused by P. falciparum.

A merozoite can also develop into a “gametocyte” which is the stage that can infect a mosquito. There are two kinds of gametocytes: males (microgametes) and females (macrogametes). They get ingested by a mosquito, when it drinks infected blood. Inside the mosquito’s midgut, male and female gametocytes merge into “zygotes” which then develop into “ookinetes.” The motile ookinetes penetrate the midgut wall and develop into “oocysts.” The cysts eventually release sporozoites, which migrate into the salivary glands where they get injected into humans. The development inside a mosquito takes about two weeks and only after that time can the mosquito transmit the disease. P. falciparum cannot complete its life cycle at temperatures below 20 °C. 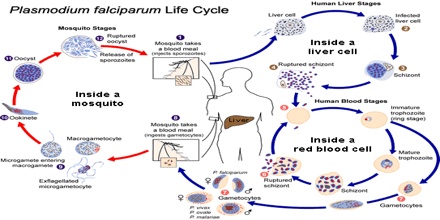 Human infectionbegins with the injection of sporozoites into the bloodstream by infected female Anopheles spp. mosquitoes during a blood meal. Sporozoites travel to the liver and initially invade hepatocytes and multiply, which is known as pre-erythrocytic development. This is followed by the release of merozoites into the bloodstream, which initiates the asexual parasite multiplication stage. The variation in the density of asexual parasites in the bloodstream of infected individuals in an area of moderate transmission intensity is shown in red (inset). The duration of blood-stage infection is highly variable: many infections are cleared at an early stage, whereas others remain for several months. A fraction of merozoites form sexual gametocytes, which is the only parasite form that is capable of transmission from humans to mosquito vectors. Immature gametocytes (those in stages I–IV) are sequestered in the bone marrow and only mature gametocytes (stage V) circulate in peripheral blood. The density of mature gametocytes in peripheral blood is typically less than 100 gametocytes per μl of blood (light blue; inset) and the vast majority are present at submicroscopic densities. Following ingestion by mosquitoes, each individual gametocyte forms one female macrogamete or up to eight male microgametes. In the mosquito midgut, gamete fusion produces a zygote that develops into a motile ookinete, which can penetrate the midgut wall and form oocysts. Oocyst densities in naturally infected mosquitoes that have fed on either microscopic or submicroscopic parasite carriers are typically in the range of 1–10 oocysts (brown; inset). The oocysts enlarge over time and burst to release sporozoites that migrate to the mosquito salivary gland, from where they can infect humans during the next blood meal. 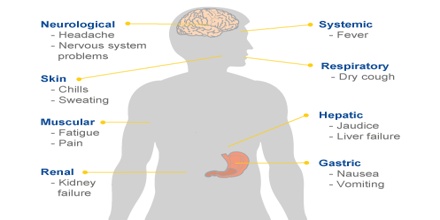 After being bitten by an infected mosquito, symptoms usually begin within 10–30 days. Malaria can be uncomplicated or severe. Symptoms of uncomplicated malaria might include:

The disease can turn into severe malaria, if there are serious organ failures or abnormalities in the bloodstream or metabolism. Symptoms of severe malaria might include:

During pregnancy malaria can lead to premature baby delivery or delivery of a low-birth-weight baby. The infant can get the parasite from the mother and develop the disease. Central nervous system involvement (cerebral malaria) can cause (especially in small children) blindness, deafness, speech difficulty, paralyses and trouble with movements.

Most malaria deaths occur in rural areas. Quick progression from illness to death can be prevented by fast and effective medication. Patients who have uncomplicated malaria can visit a nearby hospital to get treated and then go home to rest. In emergency cases rectal artesunate drug can be given as a first line treatment, if they cannot be treated orally. Patients with severe malaria can be hospitalized for many days. When treating a malaria patient, the following should be taken into account:

Listed below are some drugs that are usually recommended by national malaria control programs. They might not be effective in many parts of the world due to drug resistant strains.

Primaquine, is used as an adjunct against certain Plasmodium species. It is active against the dormant liver forms (hypnozoites which are rare/nonexistent with P. falciparum). Primaquine is not recommended for people who are deficient in glucose-6-phosphate dehydrogenase or for pregnant women. Treating all people simultaneously in a population can prevent major malaria epidemics. Unfortunately it can also increase drug resistance of the parasite and complications in those who are glucose-6-phosphate dehydrogenase deficient. 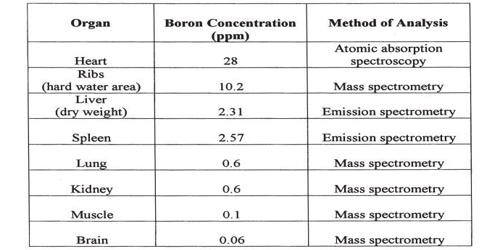