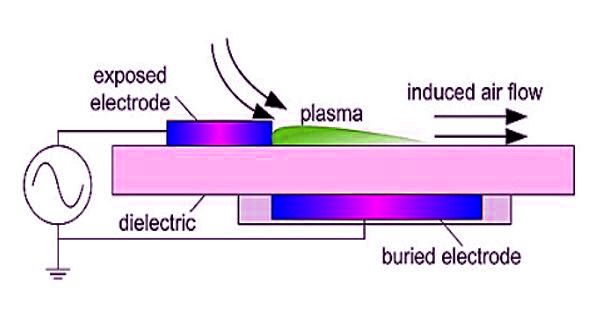 Actuators play an important role in modern active flow control technology. Plasma actuators are electrical devices that generate a wall-bounded jet without the use of any moving parts. They are a type of actuator currently being developed for aerodynamic flow control. Plasma actuators impart force in a similar way to ionocraft. For aerodynamic applications, they can be used as flow control devices to delay separation and augment lift on a wing. Flow control denotes the use of various methods to manipulate the natural state of a fluid flow to have desired properties for a specific purpose. The ability to control flows can be beneficial in many engineering and science applications.

Plasma actuators are electrical devices that generate a wall-bounded jet without the use of any moving parts. These work by ionizing the part of the air around the hidden electrode and turning it into a plasma. 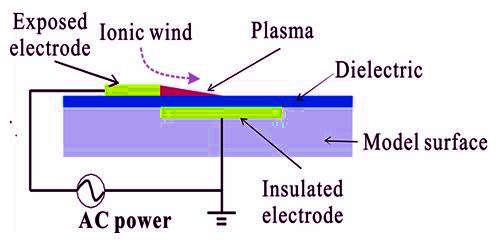 Plasma actuators are based on the formation of what is known as ‘plasma’ between two electrodes – one of which is exposed to the air while the other is hidden in an insulating material (dielectric). The working of these actuators is based on the formation of a low-temperature plasma between a pair of asymmetric electrodes by application of a high-voltage AC signal across the electrodes. Plasma (considered the fourth state of matter) is a high-energy, ionized gas made up of electrically charged particles. Plasma actuators work by ionizing the part of the air around the hidden electrode and turning it into a plasma.

Consequently, air molecules from the air surrounding the electrodes are ionized and are accelerated through the electric field. The increasing popularity and maturity of plasma actuators for many flow control applications require a common standard for plasma actuator performance evaluation. Effective flow control can be used to reduce aerodynamic drag; increase the maneuverability of vehicles, including road, airborne, and underwater vehicles; lower noise generation from objects moving at high speeds; augment heat transfer and mixing in industrial processes; accelerate reaction rates in chemical and biochemical reactors; enhance the cooling of devices such as electronic chips, compressors, and turbine blades; improve the efficiency of internal combustion engines and devices that harness the kinetic energy of wind and water currents; suppress unwanted flow-induced vibrations of overhead lines and offshore pipelines, etc.