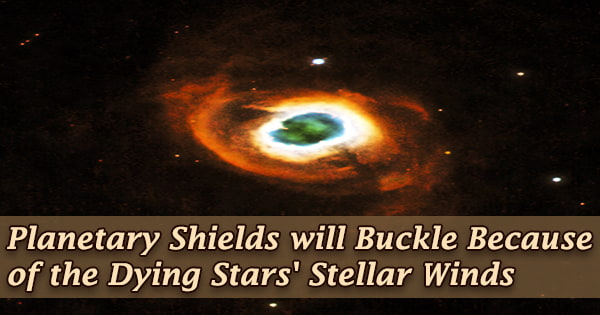 Planetary Shields will Buckle Because of the Dying Stars’ Stellar Winds

According to recent research done by the University of Warwick that exposes the implications of the strong and violent stellar winds that would pummel a planet as its star dies, any life found on planets circling white dwarf stars almost definitely developed after the star’s death. The study was published in the Royal Astronomical Society’s Monthly Notices, and main author Dr. Dimitri Veras will discuss it at the online National Astronomy Meeting (NAM) on July 21, 2021.

By studying the influence that the star’s winds will have on orbiting planets throughout the star’s transition to the white dwarf stage, the research gives fresh information for scientists seeking for evidence of life near these dead stars. The study finds that life can only survive catastrophic stellar development if the planet has a very strong magnetic field or magnetosphere to protect it from the worst consequences.

Solar wind particles can destroy the protective layers of the atmosphere that shelter humans from dangerous UV radiation in the case of Earth. Through its magnetic field, the terrestrial magnetosphere functions as a shield, diverting such particles away. A magnetosphere is not found on all planets, but Earth’s is created by its iron core, which revolves like a dynamo to generate its magnetic field.

“We know that the solar wind in the past eroded the Martian atmosphere, which, unlike Earth, does not have a large-scale magnetosphere. What we were not expecting to find is that the solar wind in the future could be as damaging even to those planets that are protected by a magnetic field,” says Dr. Aline Vidotto of Trinity College Dublin, the co-author of the study.

All-stars eventually deplete the hydrogen supply that powers nuclear fusion in their cores. The core of the Sun will next shrink and heat up, causing a massive expansion of the star’s outer atmosphere, turning it into a red giant.’ The Sun will eventually grow to tens of millions of kilometers in diameter, engulfing the inner planets, including perhaps the Earth.

At the same time, as the star loses mass, its gravitational attraction weakens, causing the surviving planets to drift further away. The solar wind will be stronger and vary drastically during the red giant phase than it is now. Veras and Vidotto calculated the winds of 11 distinct kinds of stars, ranging in mass from one to seven times that of our Sun.

Their model illustrated how the stellar wind’s density and speed, along with an increasing planetary orbit, conspire to decrease and extend a planet’s magnetosphere over time. Any planet’s magnetic field must be at least one hundred times greater than Jupiter’s present magnetic field to retain its magnetosphere during all phases of star development.

A change in a star’s habitable zone, which is the distance at which a planet can be at the proper temperature to support liquid water, is also a result of stellar development. The habitable zone in our solar system would shift from roughly 150 million kilometers from the Sun, where Earth is now, to 6 billion kilometers, or beyond Neptune.

The scientists discovered that the habitable zone travels outward faster than the planet during the large branch phases, providing extra hurdles to any existing life trying to survive the process.

The red giant eventually loses its whole outer atmosphere, leaving just a dense hot white dwarf remnant. Because these stars do not produce stellar winds, the threat to surviving planets is no longer present.

Dr. Veras said: “This study demonstrates the difficulty of a planet maintaining its protective magnetosphere throughout the entirety of the giant branch phases of stellar evolution.”

“One conclusion is that life would very likely emerge on a planet in the habitable zone around a white dwarf during the white dwarf phase unless that life was able to endure many severe and rapid changes in its environment.”

Future missions, such as the James Webb Space Telescope, which will launch later this year, should reveal more about planets orbiting white dwarf stars, including whether planets within their habitable zones show biomarkers that indicate the presence of life, so the study adds to any potential discoveries.

There has yet to be discovered a terrestrial planet capable of supporting life orbiting a white dwarf, although two known gas giants are near enough to their star’s habitable zone to imply that such a planet may exist. Because of interactions with other planets further away, these planets are believed to have migrated closer to the white dwarf.