Performance of the Trust Bank Limited

Trust Bank Limited is a scheduled commercial bank established under the Bank Companies Act 1991 and incorporated as a public limited company under the companies act, 1994 in Bangladesh on 17 June 1999 with primary objective to carry on all kinds of banking businesses in and outside. As on 31 December 2006, the bank had 18 branches. By the 31 October 2008 the bank has opened another ten branches gearing the total number as 30. The comparative performance of the bank among different years appears as follows:

ANALYSIS FROM THE BALANCE SHEET:

based on the availability of the data. The key points of the financial statements take the following figure:

The Authorized Capital of the bank was Tk 100.00 crore in 2005 which was increased in subsequent year 2006 by twofold. In 2007 and also in 2008 the authorized capital stands for the same worth of Tk. 200.00 crore. It is due to the bank’s future expansion philosophy and to keep rein with the market competitiveness and also for the requirement of Bangladesh Bank circular. 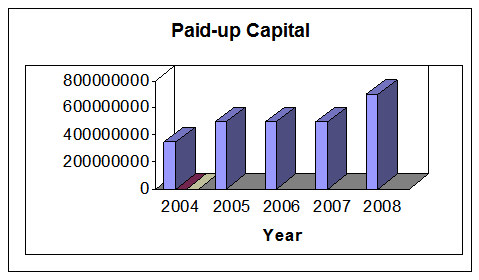 The paid-up capital was also increased by Tk 15.00 crore in 2005 materializing the total value of Tk50.00 Crore. The increment was done because of the bank’s future expansion philosophy and to keep rein with the market competitiveness. In the year 2008 the bank increased its Paid-up capital up to Tk.70.00 Crore by issuing shares through IPO. 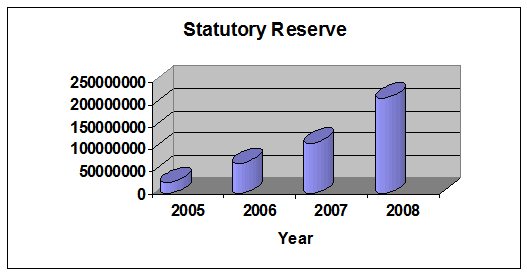 Fixed assets include Furniture and Fixture, Office equipment, Motor vehicles, office renovation and leasehold land. The depreciation on the fixed assets is charged on straight line basis at the following rates: 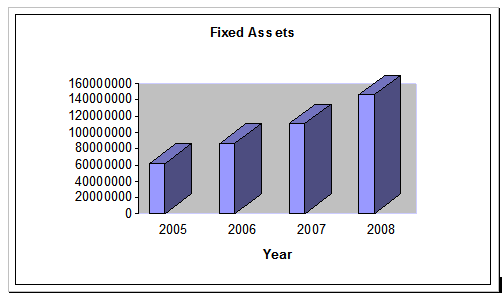 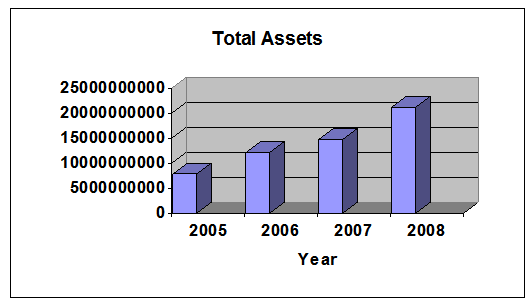 Total assets of the bank consists of –

The Total Deposit of the bank was- 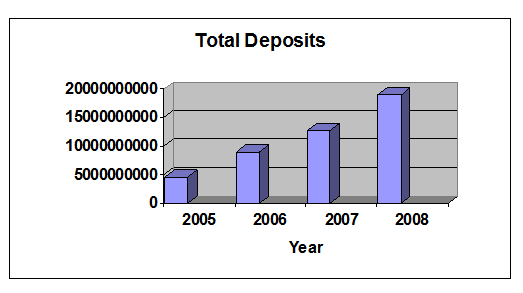 The pictorial graph and the subsequent numerical figure show that the deposit collection was more than double than that of 2005. In 2007, total deposit was increased by 40.5% than the deposit of accumulated in 2006. So it is vivid from the viewpoint of deposit collection the performance of the bank in 2006 was far better than 2007 and in 2008 the position was  much much better than 2007. 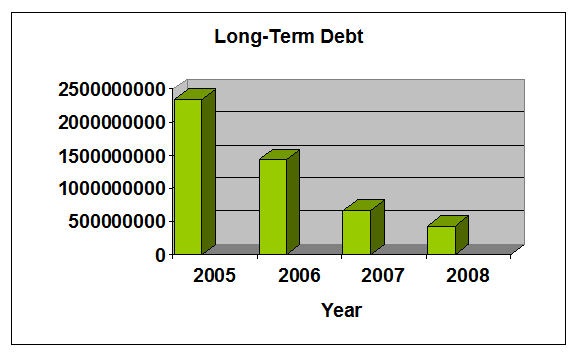 i  LOANS AND ADVANCES : 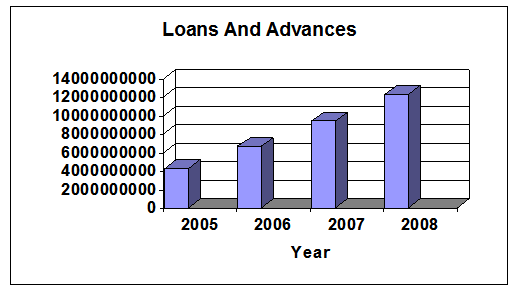 In this competitive market this bank earned Tk.1, 444,597,936 in 2007 which is 38.06% greater than the gross income of 2006. It clearly indicates that this is a growing organization and will continue its success in the coming years.

The Actual Profit before Tax of the bank was as under:

From the information mentioned above a comment can be made that Year-2006 was its “Golden Age”. But in 2007 it also increased its “profit before tax” and gained a honorable position in the banking sector. In the year 2008 the Bank earned a remarkable Profit which is near about double than the profit of the year 2007.

The Actual Profit after Tax of the bank was as under :

And the amount for the provision of tax was –

From the above mentioned statement, it is vivid that the net profit touches the peak in 2006 by accomplishing a stunning rise of 217.68%. But the journey of increasing profit can be backward in 2007. The After Tax Net Profit went down by 43.95% in 2007 comparing the profit of 2006 the Provision for Tax played a significant role in this respect. Of course, the After Tax Net Profit in the year 2008 shows the upper trend which was 116.59% higher than the year 2007.

TREND OF OTHER FINANCIAL STATEMENT ISSUES:

Comment: Although the cost of fund went down in 2007 by 0.07%, the profitability of the bank was declining. Return on Investment went down significantly by 12.13% and the Return on Assets also went down by more than half i.e. 0.97%. Moreover, there was a shortage of capital adequacy in 2007 as the ratio fell down from 15.20% to 12.49%, although the Credit in response to Deposit increased by a little bit, by 1.40%. So it can be said that investment was not efficiently made. Concentration should also be given to the Capital, Deposit and Credit Management.

SWOT Analysis is an important tool for evaluating the company’s Strengths, Weaknesses, Opportunities and Threats. It helps the organization to identify hoe to evaluate its performance and can scan the macro environment, which is turn would help the organization to navigate in the TurbulenceOcean of competition. Following is given the SWOT analysis of The Trust Bank:

The Trust Bank has founded by The Army Welfare Trust. The main sponsor for this bank is Sena Kalyan Sangstha. The chairperson of this bank is Chief of Army Staff and directors are also appointed by the sangstha, that’s why the sponsor does not have any problem for the fund.

The Trust Bank has created a good reputation in the banking industry of the country. Their main customers are army persons. The popularity of this bank is increase day by day also in the general public area.

The bank has already lunched retail-banking division to sell their products as well as increase customers or clients.

From the very beginning The Trust Bank tries to furnish their work surroundings with modern equipment and facilities. For speedy service to the customer, The Trust Bank had installed money-counting machine in the teller counter. The bank has computerized banking operation under software called PC banking. More over computer printed statements are available to internal use and occasionally for the customers. The Trust Bank is equipped with telex and fax facilities.

From the formative stage of The Trust Bank tried to furnish their branches by the impressive style. Their well-decorated branches gets attention of the potential customer, this is one kind of positioning strategy. The Millennium Branch is also impressive and is comparable of foreign banks.

It is so important for every bank because today’s world is very much dependent on computer which means E-banking. By offering such kinds of facilities TBL increase clients and maximize customer’s satisfaction.

TBL branches location are attractive that most of branches are located near the army cantonments and also charming location, which convey historical evidence.

TBL’s maintains good infrastructure inside and outside at the office that brings positive feelings about the banks in the minds of the customers. EX-separate room for manager and others senior officers which keep the individual personality.

There is a micro credit division, which is strength of TBL. Islamic banking Introduction of Islamic Banking

The hierarchy problem treated as a weakness for The Trust Bank, because the employee will not stay for a long. So there will be a chance of brain drain from this bank to other bank.

There is another weakness for The Trust Bank is advertisement. Their media coverage is so much low that people do not know the bank thoroughly.

Limited branches are another weakness of TBL among most other commercial bank.

The Trust Bank can pursue diversification strategy in expanding its current line of business. They do not serve not only the army but also the general people.

The investment potential of Bangladesh is foreign investors. So EBL has opportunity to expand in business banking.

There is an opportunity to launch Credit Card in Bangladesh by EBL. Beside this, EBL can acquire services for cards like VISA, MASTER CARD etc. So that they can enhance the market based card service.

TBL has great opportunity to expand branches in different EPZ and other commercial areas.

This is the possible way to earn more profit by limited investment. If TBL emphasize in this

division it has huge opportunities to maximize their profit among other divisions.

The contemporary banks of The Trust Bank like: Dhaka Bank, Dutch Bangla Bank, National Bank, Mutual Trust Bank, Mercantile Bank are its major rivals. They are carrying out aggressive campaign to attract lucrative clients as well as big time depositors. The Trust Bank should remain vigilant about the steps taken by these banks, as these will in turn affect The Trust Bank strategies.

The Rapid expansion of multinational bank poses a potential threat to new PCB’s. Due to the booming energy sector, more foreign banks are expected to operate in Bangladesh. Moreover, the existing foreign banks such as HSBC, AMEX, CITI N.A, and Standard Chattered Grindlays are now pursing an aggressive branch expansion strategy. Since the foreign banks have tremendous financial strength, it will pose a threat to local bank to a certain extant in terms of grabbing the lucrative clients.

Default culture is very much familiar in our country. For a bank, it is very harmful. As The Trust Bank is new, it has not faced it seriously yet. However as the bank grows older it might become big problems.

Trust Bank limited pursues decentralized management polices and gives adequate work freedom to the employees. This results in less pressure for the workers and acts as a motivational tool for them, which gives them, increased encouragement and inspiration to move up the ladder of success. The profit earned by the bank is used to the welfare activities of the Trust. The economic service of the bank is open to all caste and class of people. The bank is formatting and accomplishing various welfare projects and activities for the socio economic infrastructural development of the country and the active participation to the up gradation of the comparative feeble class of the society, instead of accumulating profit. It has also been linked with many foreign banks to facilitate the foreign currency transfer by the members of armed forces working in the UN and emigrant Bangladeshi. The report is aimed at studying and understanding the various services offered by TBL to its clients. In addition, the report also studies how Trust Bank Limited has maintained growth in its general banking business by maintaining and enhancing its relationship with its clients.

The success of Trust Bank limited is largely credited to its friendly, co-operative approach, understanding the special banking needs of each and every client and concern for the benefits and welfare. From the beginning, the prime objective of Trust Bank limited was to increase capitalization, to maintain disciplined growth and high corporate ethics standard and enhance the health of the share holders. Its customer service is very much impressive than of other financial institutions. Their effective strategy, time demand offerings, up to date rules and regulations to cope with international market and their friendship customer services easily impress the clients. So, now Trust Bank limited is in leading position in Financial Institutional sectors in Bangladesh. The financial performance of the bank in recent years is pretty well. Moreover, any laxity in operational ground can considerably be compensated through the cordial services provided by a staff of talented officers or employees.

Through conducting this study I have acquired some practical knowledge about export import business in Bangladesh & and other relevant matters. Now I would like to provide some recommendation which may be helpful to promote the export import business of The Trust Bank Limited as well as Bangladesh. As per earnest observation some suggestions for improvement of the situation are given below:

The Banking System in Bangladesh