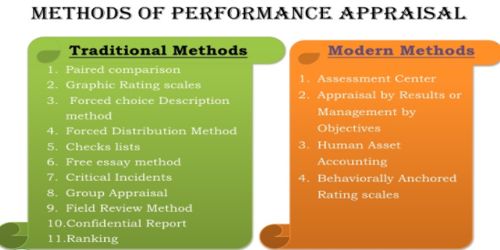 There are many types of performance appraisal methods. Those are divided in two parts

The rating scale method offers a high degree of structure for appraisals. Each employee trait or characteristic is rated on a bipolar scale that usually has several points ranging from “poor” to “excellent” (or some similar arrangement). The traits assessed on these scales include employee attributes such as cooperation, communications ability, initiative, punctuality and technical (work skills) competence. The nature and scope of the traits selected for inclusion is limited only by the imagination of the scale’s designer, or by the organization’s need to know. The one major provision in selecting traits that they should be in some way relevant to the appraisee’s job. The traits selected by some organizations have been unwise and have resulted in legal action on the ground of discrimination (Torre, 1996)

The greatest advantage of rating scales is that they are structured and standardized. This allows ratings to be easily compared and contrasted – even for entire workforces.

Each employee is subjected to the same basic appraisal process and rating criteria, with the same range of responses. This encourages equality in treatment for all appraise and imposes standard measures of performance across all parts of the organization (David, 1993). Rating scale methods are easy to use and understand. The concept of the rating scale makes obvious sense; both appraiser and appraise have an intuitive appreciation for the simple and efficient logic of the bipolar scale.

This result is widespread acceptance and popularity for this approach.

In the essay method approach, the appraiser prepares a written statement about the employee being appraised. The statement usually concentrates on describing specific strengths and weakness in job performance. It also suggests courses of action to remedy the identified problem areas (Harry, 2007).

The statement may be written and edited by the appraiser alone or it can be composed in collaboration with the appraisee.

The essay method is far less structured and confining than the rating scale method. It permits the appraiser to examine almost any relevant issue or attribute of performance. This contrasts sharply with methods where the appraisal criteria are rigidly defined (Harry, 2007).

Appraisers may place whatever degree of emphasis on issues or attributes that they feel appropriate. Thus the process is open-ended and very flexible.

The appraiser is not locked into an appraisal system the limits expression or assumes that employee traits can be nearly dissected and scaled.

Essay methods are time –consuming and difficult to administer. Appraisers often find the essay technique more demanding then methods such as rating scales.

The techniques greatest advantage – freedom of expression – is also its greatest handicap. The varying writing skills of appraisers can upset and distort the whole process .The pricess is subjective and in consequence, it is difficult to compare and contrast the result of individuals or to draw any broad conclusion about organizational needs (Christopher, 2006).