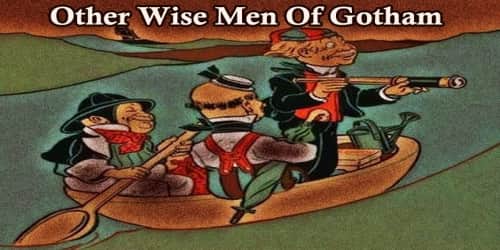 Other Wise Men Of Gotham

One day, the news was brought to Gotham that the king was coming that way and that he would pass through the town. This did not please the men of Gotham at all. They hated the king, for they knew that he was a cruel, bad man. If he came to their town, they would have to find food and lodging for him and his men; and if he saw anything that pleased him, he would be sure to take it for his own. What should they do?

They met together to talk the matter over.

“Let us chop down the big trees in the woods so that they will block up all the roads that lead into the town,” said one of the wise men.

So they went out with their axes, and soon all the roads and paths to the town were filled with logs and brush. The king’s horsemen would have a hard time of it getting into Gotham. They would either have to make a new road, or give up the plan altogether, and go on to some other place.

When the king came and saw that the road had been blocked up, he was very angry.

“Who chopped those trees down in my way?” he asked of two country lads that were passing by.

“The men of Gotham,” said the lads.

“Well,” said the king, “Go and tell the men of Gotham that I shall send my sheriff into their town, and have all their noses cut off.”

The two lads ran to the town as fast as they could, and made known what the king had said.

Everybody was in a great fright. The men ran from house to house, carrying the news, and asking one another what they should do.

“Our wits have kept the king out of the town,” said one; “and so now our wits must save our noses.”

Then one, whose name was Dobbin, and who was thought to be the wisest of them all, said, “Let me tell you something. Many a man has been punished because he was wise, but I have never heard of anyone being harmed because he was a fool. So, when the king’s sheriff comes, let us all act like fools.”

“Good, good!” cried the others. “We will all act like fools.”

It was no easy thing for the king’s men to open the roads; and while they were doing it, the king grew tired of waiting, and went back to London. But very early one morning, the sheriff with a party of fierce soldiers rode through the woods, and between the fields, toward Gotham. Just before they reached the town, they saw a queer sight. The old men were rolling big stones up the hill, and all the young men were looking on, and grunting very loudly.

The sheriff stopped his horses and asked what they were doing.

“We are rolling stones up-hill to make the sunrise,” said one of the old men.

“You foolish fellow!” said the sheriff. “Don’t you know that the sun will rise without any help?”

“And what are you doing?” said the sheriff to the young men.

“Oh, we do the grunting while our fathers do the working,” they answered.

“I see,” said the sheriff. “Well, that is the way the world goes every-where.” And he rode on toward the town.

He soon came to a field where a number of men were building a stone wall.

“What are you doing?” he asked.

“Why, master,” they answered, “there is a cuckoo in this field, and we are building a wall around it so as to keep the bird from straying away.”

“You foolish fellows!” said the sheriff. “Don’t you know that the bird will fly over the top of your wall, no matter how high you build it?”

The sheriff next met a man who was carrying a door on his back.

“What are you doing?” he asked.

“I have just started on a long journey,” said the man.

“But why do you carry that door?” asked the sheriff.

“Then why didn’t you leave the door at home too?”

“I was afraid of thieves; and you see, if I have the door with me, they can’t break it open and get in.”

“You foolish fellow!” said the sheriff. “It would be safer to leave the door at home, and carry the money with you.”

“Ah, would it, though?” said the man. “Now, I never thought of that. You are the wisest man that I ever saw.”

Then the sheriff rode on with his men, but everyone that they met was doing some silly thing.

“Truly I believe that the people of Gotham are all fools,” said one of the horsemen.

“That is true,” said another. “It would be a shame to harm such simple people.”

“Let us ride back to London, and tell the king all about them,” said the sheriff.

So they went back, and told the king that Gotham was a town of fools; and the king laughed, and said that if that was the case, he would not harm them, but would let them keep their noses.