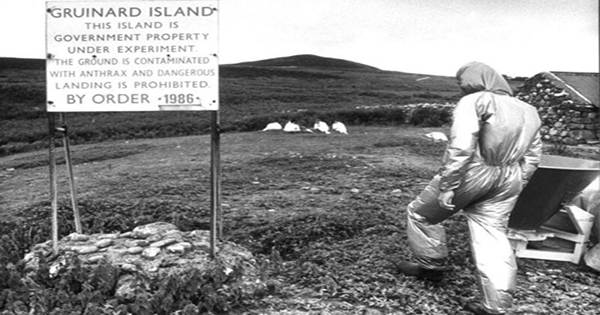 Winston Churchill directed Porton Down, a chemical and weapons development laboratory, to find a means to weaponize anthrax against the Nazis in 1942. One of the schemes they devised would have murdered in such an indiscriminate fashion that it would have lived up to its ominous moniker, “Operation Vegetarian.” Bacillus anthracis causes anthrax, which is an infectious illness, caused by the bacterium Bacillus anthracis.

Anthrax can be lethal or “just take this guy to the morgue” depending on how animals (or people) come into touch with the germs. The death rate is greater when breathed, but when eaten (and treated), the survival rate is still just 60%, even lower than during WWII. Furthermore, it spreads quickly and indiscriminately among animals.

The British would throw cakes at the enemy in Operation Vegetarian, which was as easy as it was ridiculous. Well “cattle cakes” for cows, to be precise, the plan was for bombers from the Royal Air Force to dump anthrax-laced cow cakes onto grazing pastures. The cows would consume the cakes, infecting themselves with anthrax unintentionally.

The cows would then perish, infect others, or infect people before dying. While it is unfortunate for the cows, you have already figured out that they were not the primary objective. The purpose was to deplete the food supply by inducing folks to consume contaminated meat, with the expectation that the infection would spread among people and starve the enemy. They also reasoned that Germany may abstain from eating meat entirely (thus the moniker “Project Vegetarian”), shattering their morale.

Of course, one of the major flaws in the concept is anthrax’s indiscriminate nature. In essence, the scheme may have murdered millions of people, including civilians and Nazis. However, that was not the reason for the project’s cancellation. The British tried to put the technology to the test in 1942 by attacking sheep on Gruinard Island, off the coast of Scotland. A flock of sheep gathered near an explosive device, which surrounded with anthrax cakes, the attack’s chosen mode of delivery.

The sheep all perished within a few days, and anthrax infected nearly the whole island, necessitating an island-wide quarantine. Although the sheep buried, one was uncovered and drifted across the water to mainland Scotland, The body partially eaten by a dog, which then spread the disease to local cattle and pets. The event did not completely deter the British from pursuing the plan, but by the time they were ready to carry it out, the Nazis had retreated, rendering the scheme obsolete. Anthrax contamination on the island persisted until roughly 1990. Only a slew of animals, all of them were British, killed.