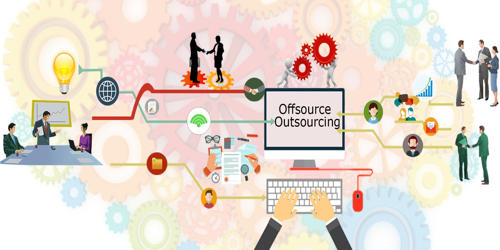 Offshoring is when production operations are performed in another country. It is the relocation of a business process from one country to another—typically an operational process, such as manufacturing, or supporting processes, such as accounting. It is the process of relocating the business operations unit to a different country where cheap labor or resources are available.  Typically this refers to company business, although state governments may also employ offshoring. More recently, technical and administrative services have been offshored. It is often criticized for transferring jobs to other countries. Other risks include geopolitical risk, language differences, and poor communication, etc.

Offshoring and outsourcing are not mutually inclusive: there can be one without the other. They can be intertwined (Offshore outsourcing), and can be individually or jointly, partially or completely reversed, involving terms such as reshoring, inshoring, and insourcing. In the developing world, by contrast, vast inexpensive labor pools provide an easy bedrock for a low-cost economy. Alongside technological improvements, it has been the decades of productive offshoring that has lowered the costs of consumer goods such as clothing and electronics.

Offshoring is when the offshored work is done by means of an internal (captive) delivery model., sometimes referred to as in-house offshore. The benefits of offshoring are usually lower costs, better availability of skilled people, and getting work done faster through a global talent pool. Imported services from subsidiaries or other closely related suppliers are included, whereas intermediate goods, such as partially completed cars or computers, may not be. Companies usually offshore manufacturing or services to developing countries where wages are low, thus resulting in cost savings.

Offshoring has the potential to significantly benefit businesses.