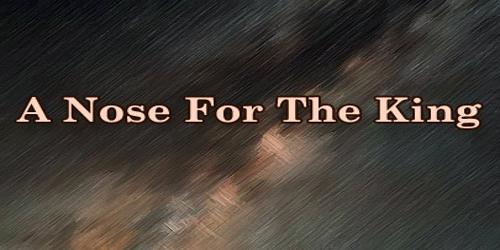 A Nose For The King

In the morning calm of Korea, when its peace and tranquillity truly merited its ancient name, “Cho-sen,” there lived a politician by name Yi Chin Ho. He was a man of parts, and–who shall say?–perhaps in no wise worse than politicians the world over. But, unlike his brethren in other lands, Yi Chin Ho was in jail. Not that he had inadvertently diverted to himself public money, but that he had inadvertently diverted too much. Excess is to be deplored in all things, even in grafting, and Yi Chin Ho’s excess had brought him to most deplorable straits.

Ten thousand strings of cash he owed the Government, and he lay in prison under sentence of death. There was one advantage to the situation he had plenty of time in which to think. And he thought well. Then called he the jailer to him.

“Most worthy man, you see before you one most wretched,” he began. “Yet all will be well with me if you will but let me go free for one short hour this night. And all will be well with you, for I shall see to your advancement through the years, and you shall come at length to the directorship of all the prisons of Cho-sen.”

“How now?” demanded the jailer. “What foolishness is this? One short hour, and you but waiting for your head to be chopped off! And I, with an aged and much-to-be-respected mother, not to say anything of a wife and several children of tender years! Out upon you for the scoundrel that you are!”

“From the Sacred City to the ends of all the Eight Coasts there is no place for me to hide,” Yi Chin Ho made reply. “I am a man of wisdom, but of what worth my wisdom here in prison? Were I free, well I know I could seek out and obtain the money wherewith to repay the Government. I know of a nose that will save me from all my difficulties.”

“A nose!” cried the jailer.

The jailer threw up his hands despairingly. “Ah, what a wag you are, what a wag,” he laughed. “To think that that very admirable wit of yours must go the way of the chopping-block!”

And so saying, he turned and went away. But in the end, being a man soft of head and heart, when the night was well along he permitted Yi Chin Ho to go.

Straight he went to the Governor, catching him alone and arousing him from his sleep.

“Yi Chin Ho, or I’m no Governor!” cried the Governor. “What do you here who should be in prison waiting on the chopping-block?”

“Impossible!” cried the Governor. “Beside, you are condemned to death.”

“Have you a plan whereby you hope to obtain this money?” asked the Governor.

“Then come with it to me to-morrow night; I would now sleep,” said the Governor, taking up his snore where it had been interrupted.

On the following night, having again obtained leave of absence from the jailer, Yi Chin Ho presented himself at the Governor’s bedside.

“It is I, Your Excellency,” answered Yi Chin Ho, “and the plan is here.”

The Governor sat up and opened his eyes. Yi Chin Ho proffered in his hand a sheet of paper. The Governor held it to the light.

“Nothing but a nose,” said he.

“A bit pinched, so, and so, Your Excellency,” said Yi Chin Ho.

“Yes, a bit pinched here and there, as you say,” said the Governor.

“Withal it is an exceeding corpulent nose, thus, and so, all in one place, at the end,” proceeded Yi Chin Ho. “Your Excellency would seek far and wide and many a day for that nose and find it not!”

“An unusual nose,” admitted the Governor.

“A most unusual nose,” said the Governor. “Never have I seen the like. But what do you with this nose, Yi Chin Ho?”

And the Governor laughed and affixed the seal of State, and Yi Chin Ho departed. For a month and a day he travelled the King’s Road which leads to the shore of the Eastern Sea; and there, one night, at the gate of the largest mansion of a wealthy city he knocked loudly for admittance.

“None other than the master of the house will I see,” said he fiercely to the frightened servants. “I travel upon the King’s business.”

Straightway was he led to an inner room, where the master of the house was roused from his sleep and brought blinking before him.

“You are Pak Chung Chang, head man of this city,” said Yi Chin Ho in tones that were all-accusing. “I am upon the King’s business.”

Pak Chung Chang trembled. Well he knew the King’s business was ever a terrible business. His knees smote together, and he near fell to the floor.

“The hour is late,” he quavered. “Were it not well to”

“The King’s business never waits!” thundered Yi Chin Ho. “Come apart with me, and swiftly. I have an affair of moment to discuss with you.”

“It is the King’s affair,” he added with even greater fierceness; so that Pak Chung Chang’s silver pipe dropped from his nerveless fingers and clattered on the floor.

“Know then,” said Yi Chin Ho, when they had gone apart, “that the King is troubled with an affliction, a very terrible affliction. In that he failed to cure, the Court physician has had nothing else than his head chopped off.”

From all the Eight Provinces have the physicians come to wait upon the King. Wise consultation have they held, and they have decided that for a remedy for the King’s affliction nothing else is required than a nose, a certain kind of nose, a very peculiar certain kind of nose.

“Then by none other was I summoned than His Excellency the Prime Minister himself. He put a paper into my hand. Upon this paper was the very peculiar kind of nose drawn by the physicians of the Eight Provinces, with the seal of State upon it.”

‘Go,’ said His Excellency the Prime Minister. ‘Seek out this nose, for the King’s affliction is sore. And wheresoever you find this nose upon the face of a man, strike it off forthright and bring it in all haste to the Court, for the King must be cured. Go, and come not back until your search is rewarded.’

“And so I departed upon my quest,” said Yi Chin Ho. “I have sought out the remotest corners of the kingdom; I have travelled the Eight Highways, searched the Eight Provinces, and sailed the seas of the Eight Coasts. And here I am.”

With a great flourish he drew a paper from his girdle, unrolled it with many snappings and cracklings, and thrust it before the face of Pak Chung Chang. Upon the paper was the picture of the nose.

Pak Chung Chang stared upon it with bulging eyes.

“Never have I beheld such a nose,” he began.

“Bring your father before me,” Yi Chin Ho interrupted sternly.

“Why dissemble?” demanded Yi Chin Ho. “You know it is your father’s nose. Bring him before me that I may strike it off and be gone. Hurry, lest I make bad report of you.”

“Mercy!” cried Pak Chung Chang, falling on his knees. “It is impossible! It is impossible! You cannot strike off my father’s nose. He cannot go down without his nose to the grave. He will become a laughter and a byword, and all my days and nights will be filled with woe. O reflect! Report that you have seen no such nose in your travels. You, too, have a father.”

“My heart softens strangely at your tears,” said Yi Chin Ho. “I, too, know filial piety and regard.” But, He hesitated, then added, as though thinking aloud, “It is as much as my head is worth.”

“How much is your head worth?” asked Pak Chung Chang in a thin, small voice.

“A not remarkable head,” said Yi Chin Ho. “An absurdly unremarkable head; but, such is my great foolishness, I value it at nothing less than one hundred thousand strings of cash.”

“So be it,” said Pak Chung Chang, rising to his feet.

“I shall need horses to carry the treasure,” said Yi Chin Ho, “and men to guard it well as I journey through the mountains. There are robbers abroad in the land.”

“There are robbers abroad in the land,” said Pak Chung Chang, sadly. “But it shall be as you wish, so long as my ancient and very-much to be respected ancestor’s nose abide in its appointed place.”

“Say nothing to any man of this occurrence,” said Yi Chin Ho, “else will other and more loyal servants than I be sent to strike off your father’s nose.”

And so Yi Chin Ho departed on his way through the mountains, blithe of heart and gay of song as he listened to the jingling bells of his treasure-laden ponies.

There is little more to tell. Yi Chin Ho prospered through the years. By his efforts the jailer attained at length to the directorship of all the prisons of Cho-sen; the Governor ultimately betook himself to the Sacred City to be Prime Minister to the King, while Yi Chin Ho became the King’s boon companion and sat at table with him to the end of a round, fat life. But Pak Chung Chang fell into a melancholy, and ever after he shook his head sadly, with tears in his eyes, whenever he regarded the expensive nose of his ancient and very-much to be respected ancestor.