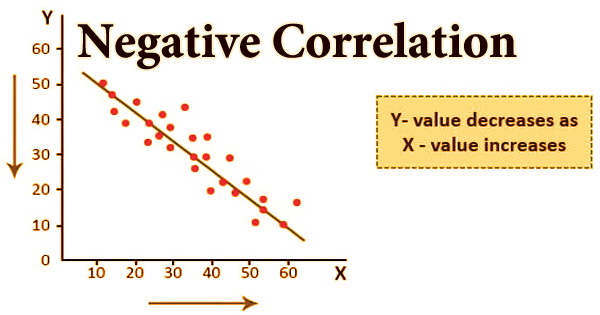 When creating diverse portfolios, a negative correlation is used so that investors can profit from price increases in certain assets while others decrease. For investors or analysts who are considering adding new investments to their portfolios, this idea is critical. When market uncertainty is high, rebalancing portfolios by replacing certain positive-correlation assets with negative-correlation securities is a typical concern.

Negative correlation between various stock markets or sectors provides for a more diversified portfolio that can better withstand market volatility and offer consistent returns over time. The portfolio moves cancel each other out, lowering risk and increasing return. Investors might begin closing offset holdings after market concern has subsided. A stock and put option on the stock, which increases in value when the stock’s price decreases, is an example of negatively correlated securities.

If variables X and Y, for example, have a negative correlation (or are negatively linked), Y will drop as X grows in value, and vice versa if X declines in value. A negative correlation is shown by a coefficient that is less than zero. When two instruments have a correlation of -1, the relationship between them is entirely inverse. When the economy is doing well, stocks generally outperform bonds; but, when the economy falters and interest rates are cut, bonds often outperform stocks.

Because stocks fall in value, bonds rise in value, and vice versa, this indicates a negative connection. While a varied portfolio cannot remove all risks, it can help when unexpected occurrences in the financial market occur. A negative cross-sectional connection between sickness and vaccination, for example, can be noticed when one has a higher than normal incidence and the other has a lower than usual incidence. Overall, negative correlations can assist managers in choosing how to allocate assets since they can help portfolio managers minimize portfolio volatility.

Similarly, if it is found in one place that times with a higher-than-average frequency of one overlap with a lower-than-average incidence of the other, there would be a negative temporal connection between sickness and vaccination. The correlation coefficient, which quantifies the strength of the correlation between two variables, measures the degree to which one variable move in relation to the other. When calculating a negative correlation, follow these easy procedures:

A negative correlation between the returns on two separate assets increases the risk-reduction benefit of diversifying by keeping them both in the same portfolio in finance. The discipline of strategic asset allocation refers to the construction of big and complex portfolios with properly managed correlations to produce more predictable volatility.