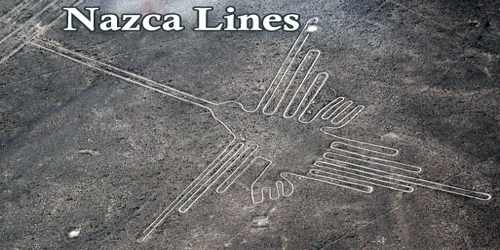 The Nazca Lines /ˈnæzkɑː/ are a collection of giant geoglyphs designs or motifs etched into the ground located in the Peruvian coastal plain about 250 miles (400 kilometers) south of Lima, Peru. The main concentration is in a 10 by 4 km (6 mi by 2 mi) rectangle, south of San Miguel de la Pascana hamlet. In this area, the most notable geoglyphs are visible. Created by the ancient Nazca culture in South America, and depicting various plants, animals, and shapes, the 2,000-year-old Nazca Lines can only be fully appreciated when viewed from the air given their massive size. The largest of them spans over 200 metres. They were created by removing the red stones of the region to reveal the white limestone underneath.

They were created between 500 BC and 500 AD. Despite being studied for over 80 years, the geoglyphs which were designated a UNESCO World Heritage Site in 1994 are still a mystery to researchers.

A team of researchers says the Nazca Lines represent “one of the most attractive ancient mysteries in the world.” It’s hypothesized that the geoglyphs had ritual astronomical functions, but no one knows for sure.

Most lines run straight across the landscape, but there are also figurative designs of animals and plants, made up of lines. The individual figurative geoglyph designs measure between 0.4 and 1.1 km (.2 and .7 mi) across. The combined length of all the lines is over 1,300 km (808 mi), and the group covers an area of about 50 sq km (19 sq mi). The lines are typically 10 to 15 cm (4 to 6 in) deep. They were made by removing the top layer of reddish-brown iron oxide-coated pebbles to reveal yellow-grey subsoil. The width of the lines varies considerably, but over half are slightly over one-third meter (just over 1 foot) wide. In some places they may be only a foot (30.5 cm) wide, and in others reach 6 feet (1.8 m) wide. 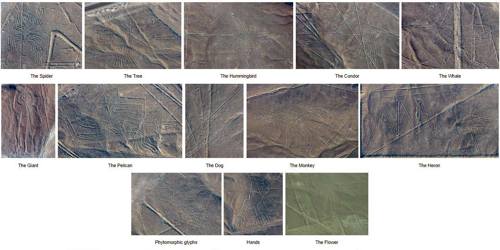 Additionally, there are over 300 geometric designs, which include basic shapes such as triangles, rectangles, and trapezoids, as well as spirals, arrows, zig-zags and wavy lines. Some of the Nazca lines form shapes that are best seen from the air (~1,500 ft, 457 m), though they are visible from the surrounding foothills and other high places. The shapes are usually made from one continuous line. The largest ones are about 370 m (1,200 ft) long. Because of its isolation and the dry, windless, stable climate of the plateau, the lines have mostly been preserved naturally. Extremely rare changes in weather may temporarily alter the general designs.

The Nazca Lines are perhaps best known for the representations of about 70 animals and plants, some of which measure up to 1,200 feet (370 meters) long. Examples include a spider, hummingbird, cactus plant, monkey, whale, llama, duck, flower, tree, lizard and dog. The Nazca people also created other forms, such as a humanoid figure (nicknamed “The Astronaut”), hands and some unidentifiable depictions.

The first published mention of the Nazca Lines was by Pedro Cieza de León (a Spanish conquistador and chronicler of Peru) in his book of 1553, and he mistook them for trail markers. The Nazca “drew” several hundred simples, but huge, curvilinear animal and human figures by this technique. In total, the earthwork project is huge and complex: the area encompassing the lines is nearly 450 km2 (170 sq mi), and the largest figures can span nearly 370 m (1,200 ft). Some figures have been measured: the hummingbird is 93 m (305 ft) long, the condor is 134 m (440 ft), the monkey is 93 by 58 m (305 by 190 ft), and the spider is 47 m (154 ft). The extremely dry, windless, and constant climate of the Nazca region has preserved the lines well. This desert is one of the driest on Earth and maintains temperature near 25 °C (77 °F) year-round. The lack of wind has helped keep the lines uncovered and visible.

In 2011, a Japanese team from Yamagata University discovered a new geoglyph that appears to represent a scene of decapitation, which, at about 4.2 meters long and 3.1 meters wide, is far smaller than other Nazca figures and not easily seen from aerial surveys. The Nazca people were known to collect “trophy heads,” and research in 2009 revealed that the majority of trophy skulls came from the same populations as the people they were buried with (rather than outside cultures). The same team found another geoglyph in 2016, this time one that depicts a 98-foot-long (30-meter-long) mythical creature that has many legs and spotted markings, and is sticking out its tongue.

A June 2019 article in Smithsonian describes recent work by a team of three Japanese researchers who identified/re-identified some of the birds depicted. In the same year the discovery of 143 new geoglyphs was announced by Yamagata University and IBM Japan. Anthropologists believe the Nazca culture, which began around 100 B.C. and flourished from A.D. 1 to 700, created the majority of the Nazca Lines. The Chavin and Paracas cultures, which predate the Nazca, may have also created some of the geoglyphs.

More recent research suggested that the Nazca Lines’ purpose was related to water, a valuable commodity in the arid lands of the Peruvian coastal plain. The geoglyphs weren’t used as an irrigation system or a guide to find water, but rather as part of a ritual to the gods an effort to bring much-needed rain. Some scholars point to the animal depictions some of which are symbols for rain, water or fertility and have been found at other ancient Peruvian sites and on pottery as evidence of this theory.

Not far from the Nazca lines in the province of Palpa, Peru, archaeologists have newly discovered more than 25 geoglyphs carved into the desert hillsides. The glyphs are commonly known as the Paracas geoglyphs. These glyphs are considered by experts to be hundreds, if not at least a thousand years older than the Nazca lines. The ancient Peruvian Indian culture of Paracas built the glyphs. This is the same culture which some believe created the well-known geoglyph known as the Paracas Candelabra.