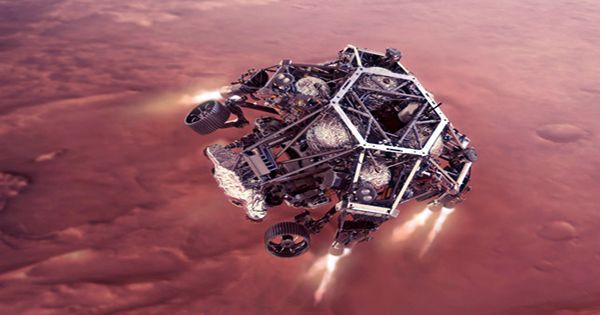 For the past ten months, NASA’s Perseverance Rover has been on Mars, and scientific data are coming in. The finding of organic molecules in the Jezero Crater is one of them, and it was the most interesting one presented at the American Geophysical Union autumn scientific meeting in New Orleans. Organics have identified on Mars previously, so this is not breaking news, but the fact that they have discovered at areas thousands of miles apart shows that these sorts of molecules are prevalent on the planet.

The SHERLOC (Scanning Habitable Environments with Raman & Luminescence for Organics & Chemicals) equipment enabled the discovery of organic molecules. SHERLOC discovered organics both within and on the dusty surface of rocks, another sign that organic compounds are widespread. “At its landing location within Gale Crater, Curiosity also identified organics,” Luther Beegle, SHERLOC principal investigator at NASA’s Jet Propulsion Laboratory, stated in a statement.

“The capacity of SHERLOC to map the spatial distribution of organics inside rocks and tie those organics to minerals found there adds to the tale. This aids our understanding of the organics’ formation environment. To identify the process of manufacturing for the detected organics, more research is needed.”

The majority of organics on Earth are the result of living creatures’ activity. Organic molecules may produce through a variety of chemical processes that do not need the presence of life. Finding these does not imply that life ever existed (or maybe presently exists) on Mars; Perseverance has gathered materials to launch from Mars back to Earth in order to better address this question. “This is a question that may not be answered until the samples get returned to Earth, but organic preservation is quite intriguing.” “These samples will be a source of scientific inquiry and discovery for many years when they are returned to Earth,” Beegle added.

With the help of its ground-penetrating radar, the intrepid rover has been mapping what is beneath the crater. It revealed that some of the rock formations studied by the rover extended far beneath. They were also reaching into the earth at the same angle as they were above ground. This, among other things, revealed information on the relative ages of rocks in the Perseverance area.

The nature of the bedrock was the final thrilling conclusion of the presentation. One rock, in particular, caught my attention because it looked too made up of an unusually high number of big olivine crystals encased in pyroxene crystals. “A good geology student will tell you that such a structure implies the rock developed when crystals grew and settled in a slowly cooling magma, such as a thick lava flow, lava lake, or magma chamber,” Farley explained.

“Water then transformed the rock multiple times, turning it into a treasure trove that will allow future scientists to date events in Jezero, better grasp the period when water was more abundant on its surface, and explain the planet’s early history.” There will be a lot to pick from in Mars Sample Return!”