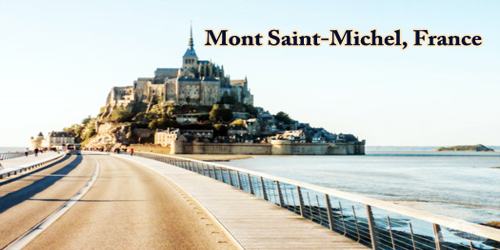 Le Mont-Saint-Michel (pronounced (mɔ̃ sɛ̃ mi.ʃɛl); Norman: Mont Saint Miché, English: Saint Michael’s Mount) rocky islet and famous sanctuary in Manche département, Normandy région, France, off the coast of Normandy. It lies 41 miles (66 km) north of Rennes and 32 miles (52 km) east of Saint-Malo. Around its base are medieval walls and towers above which raise the clustered buildings of the village with the ancient abbey crowning the mount.

One of the more popular tourist attractions in France, Mont-Saint-Michel was designated a UNESCO World Heritage Site in 1979. The island is located about one kilometer (0.6 miles) off the country’s northwestern coast, at the mouth of the Couesnon River near Avranches, and is 7 hectares (17 acres) in area. The mainland part of the commune is 393 hectares (971 acres) in the area so that the total surface of the commune is 400 hectares (988 acres). 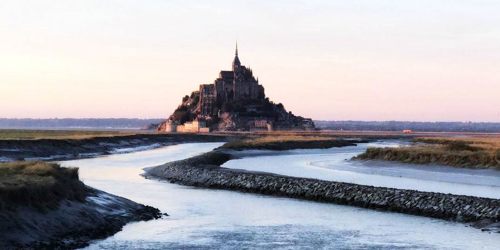 Le Mont Saint Michel is not just a church on a rock; it is a whole medieval city, one of the few places in France to have preserved intact its medieval walls and defenses. The city, though small, has to this day inhabitants not many full-time inhabitants and a mayor, and in addition to its religious monuments, has old houses, narrow streets, hotels, restaurants, and shops, all catering for the over-a-million tourists who come to visit this magnificent site each year.

Mont-Saint-Michel is almost circular (about 3,000 feet (900 meters) in circumference) and consists of a granite outcrop rising sharply (to 256 feet (78 meters)) out of Mont-Saint-Michel Bay (between Brittany and Normandy). Most of the time it is surrounded by vast sandbanks and becomes an island only when the tides are very high. Before the construction of the 3,000-foot causeway that connects the island to land, it was particularly difficult to reach because of quicksand and very fast-rising tides. The causeway, however, has become a barrier to the removal of material by the tides, resulting in higher sandbanks between the islet and the coast.

Perched on a rocky islet in the midst of vast sandbanks exposed to powerful tides, at the limit between Normandy and Brittany, stands “Wonder of the West”, a Gothic-style Benedictine abbey dedicated to the Archangel St Michel, and the village that grew up in the shadow of its walls. Built between the 11th and 16th centuries, the abbey is a technical and artistic tour de force, having had to adapt to the problems posed by this unique natural site. Thus, the practical and aesthetic solutions inscribed in the stones of the edifice are henceforth inseparable from its natural environment.

This Benedictine abbey, founded in 966, was erected on a sanctuary dedicated to the Archangel Michel since 708 and conserves some vestiges of the Romananesque period. The older part of the present abbey, the small pre-Romanesque church with a double nave, Notre-Dame-sous-terre, in granite masonry and flat bricks, dates back undoubtedly to the 10th century. The contribution of the Romanesque period is still visible in the nave of the abbey church, whose crossing is supported by the rock summit, and in a group of conventual staggered buildings (the chaplaincy or gallery of Aquilon, the covered gallery of the monks of which the vault, constructed after 1103, would be one of the earliest examples of ribbed vaulting).

The connection between the Mont Saint-Michel and the mainland has changed over the centuries. Previously connected by a tidal causeway uncovered only at low tide, this was converted into a raised causeway in 1879, preventing the tide from scouring the silt around the mount. The coastal flats have also been polderised to create pastureland, decreasing the distance between the shore and the island, and the Couesnon River has been canalized, reducing the dispersion of the flow of water. These factors all encouraged the silting-up of the bay.

The island, which was fortified in 1256, resisted sieges during the Hundred Years’ War between England and France (1337–1453) and the French Wars of Religion (1562–98). The monastery declined in the 18th century, and only seven monks were living there when it was dissolved during the French Revolution (1787–99). It became a state prison under Napoleon I (reigned 1804–14/15) and remained a prison until 1863. In 1874 it was classified as a historic monument and restored.

The fine abbey church that towers over the island has an imposing 11th- and 12th-century Romanesque nave and an elegant choir in Flamboyant Gothic style (built 1450–1521). The tower and spire, crowned by a statue of St. Michael, were added in the 19th century. The church is built over three crypts, the oldest dating probably from Carolingian times (8th–10th century). The exterior walls of the splendid Gothic monastery La Merveille (built by 1228) combine the powerful characteristics of a military fortress and the simplicity of a religious building. The most striking sections are the refectory, with its high, narrow windows, and the magnificent cloister, with its fine sculptures. There is a panoramic view of the bay from the medieval walls (13th–15th century) on the southern and eastern sides of the mount. The houses (now mainly hotels or tourist shops) along the narrow street winding up to the abbey date in some cases to the 15th century. 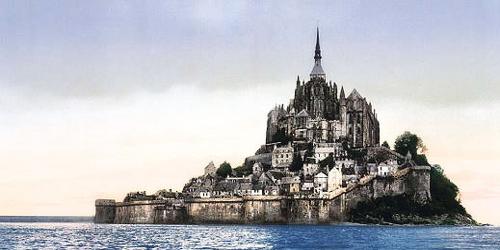 The Baie de Mont Saint Michel is one of the most steeply tidal points in Europe, with a tidal variation of almost 50 ft or 15 meters. The highest tides (spring tides) occur in a day or two following a new moon and a full moon, and most particularly at the spring and autumn equinoxes. On these occasions, the sea can completely surround the mount, except for the insubmersible causeway.  During periods of neap tides (when the tidal variation is least) the Mount is not surrounded by water at all, even at high tide.

On 22nd July 2014, the new bridge by architect Dietmar Feichtinger was opened to the public. The light bridge allows the waters to flow freely around the island and improves the efficiency of the now operational dam. The project, which cost €209 million, was officially opened by President François Hollande.

On rare occasions, tidal circumstances produce an extremely high “supertide”. The new bridge was completely submerged on 21st March 2015 by the highest sea level for at least 18 years, as crowds gathered to snap photos.

The values of the site have been maintained despite the silting up of the bay due to natural phenomena and especially the construction of an access causeway in 1879 that caused Mont to lose its insular character. On completion of major work carried out by the French State in 2015, the maritime character of the Mont Saint-Michel has been reestablished.

Home to some of the highest tides in Europe, once the tide comes in, the compound is completely cut off from land and is only accessible by boat. At any other time, Mont Saint-Michel is easily-accessible for a day-trip from Paris, France.